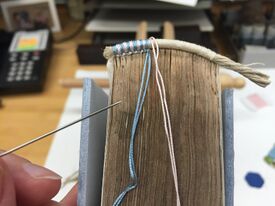 Endbands, or headbands, are functional and/or ornamental bands at the head and tail of a book between the sections and the spine covering, which project slightly beyond the head and tail (Roberts and Etherington 1982). Functions served by endbands may include supporting the sewing, controlling the shape of the spine, or reinforcing the text to cover attachment by extending across the joints. Even stuck-on endbands can serve a functional role of supporting the turned-in cap. This page includes resources, illustrations, and observations about endbands and their role in book conservation.

Several sources (Middleton 2004, Roberts and Etherington 1982, and Szirmai 1999) include bands that are intrinsically a part of the sewing of the book in their definitions of endbands. Ligatus states that these are not endbands, but instead Kapitalbünde.

In the Ligatus Language of Bindings Thesaurus, endband techniques are a subset of forwarding techniques. The varieties are further broken down into:

The process of sewing an endband down into the gatherings of the bookblock with or without a core. Primary endband sewing must by definition be entirely separate from the sewing of the bookblock. [...] Alternative label: foundational sewing

A form of primary sewing of an endband in which the thread having been taken down the centre of one gathering is brought up on the spine to go over an endband core and down into the next gathering without linking with the previous tiedown or making any form of bead. It is the type of primary sewing that is typically found on Islamic endbands.

The sewing used to tack an endband core to the head or tail of a spine of a bookblock. Whipped sewing was not used as a structural sewing but simply as a means of holding the usually decorated core in place, and results in external tiedowns which appear at an angle on the spine. This is because the thread as it emerges from the spine-fold of one gathering is taken across the spine to the point on the core where the next internal tiedown is to be made.

A form of sewing which employs a repeated figure-of-eight sewing. [...] Saddle sewing is most often found on books as the secondary sewing used with covered endbands. Alternative label: saddle stitch

The sewing, often purely decorative, which wraps around a sewn endband core but which is not tied down into the bookblock. [...]

A type of secondary endband sewing in which threads or thongs are braided around the core of a sewn endband. The braiding may be done before or after the book is covered and if after, will go through the covering material at head and tail of the spine. [...] Alternative label: plaited endbands

A secondary sewing executed by winding thread, or threads, usually coloured around the primary-sewn endband in a helix from one side to the other.

Lengths of coloured twisted cords whipped with thread to the exposed edge of the stuck-on endband lining. Typically found on some Germanic stuck-on endbands of the late fifteenth and early sixteenth centuries, this technique will not be found on sewn endbands.

In The Archaeology of Medieval Bookbinding, Szirmai (1999) breaks down endbands into seven types:

Boudalis 2014 uses this term to refer to endbands made from both a primary endband sewn though the gatherings of a book and a secondary endband sewing around the primary sewing.

This term describes a back bead (spine bead) endband adopted for use in conservation rebinding by Christopher Clarkson based on observations of medieval endband structures (Clarkson 1982). more definition needed...

Szirmai uses this term for the spine lining or covering material extension on Carolingian, Gothic, and Romanesque bindings that the endband is sewn through. Are there sources that use this term for the leather tab covering some Islamic endbands or is there an alternative term?

definition needed... Greenfield and Hille use the terms spine and edge to refer to the placement of the bead. [Citation needed] uses the term front and back bead.

Ligatus refers to these as the single sewing supports found at the head and tail of the spines of some late fifteenth and early sixteenth-century German bindings, and distinguishes them from endbands.

Endbands that are attached to the spine of the textblock by means of adhesive only.

The stitch that goes into a gathering and exits on the spine under the kettle stitch when working an endband. Its purpose is to secure the band to the textblock. When sewing functional endbands it is ideal to have the tie-downs at the center of every gathering.

In the Boudalis reference below, the author proposes a new terminology for "twined endbands" (Boudalis 2014).

Also see the endband entry in the Multilingual Bookbinding and Conservation Dictionary.

Middleton (2004) describes how to anchor and repair old endbands.

In the 19th century, the labor of sewing of endbands in some Western European binderies was sometimes done by women. Zaehnsdorf (1890, 83) had this observation: “Few binders work their own head-bands in these times of competition and strikes for higher wages. It takes some time and pains to teach a female hand the perfection of head-band working, and but too often, since gratitude is not universal, the opportunity of earning a few more pence per week is seized without regard to those at whose expense the power of earning anything was gained, and the baffled employer is wearied by constant changes. Owing to this, most bookbinders use the machine-made head-band.”

Historical endbands from the Bibliotheque National in Paris. Photograph of prototype shown with very clear and concise illustrations of technique.

Boudalis, Georgios. 2014? “Twined Endbands in the Bookbinding Traditions of the Eastern Mediterranean .Published / Presented a few places, including on Academia.edu. Accessed October 2, 2017.

The author proposes a new technical terminology for Eastern Mediterranean endbands to replace terminology based on ethnic or religious ground (e.g. Armenian, Byzantine woven, Islamic, Syriac). The terms he suggests are "twined" rather than woven, with the variations of "plain twining", "wrapped twining", "partial wrapped twining", and "full wrapped twining". The tie downs of the primary endband sewing are the warps, and the wefts are the multiple strands of decorative thread that interlace the warps and each other.

Burdett, Eric. 1975. The Craft of Bookbinding. London: David and Charles.

Describes the conservation endband as part of a model of conservation rebinding based on medieval bookbinding structures.

Cockerell, Douglas. 1991. Bookbinding and the Care of Books. New York: Lyons and Burford.

Gast’s article is a revised version of her thesis, written as a requirement for her course at Camberwell School of Art & Craft and based on Karl Jäckel's article "The Headband" (Alte Techniken des Buchbinderhandwerks in der modernen Schriftgutrestaurierung, 2: Das Kapital) which appeared in Bibliotheksforum Bayern, 3 (1975). In it, she presents in English the history and description of historical endbands reinterpreting Jäckels diagrams and including photographs of these on historic bindings and book blocks. Styles included are: leather tabs, wound endbands (often used as primary endbands), plaited with leather thongs, plaiting with threads, modern endbands, Islamic (Oriental) endbands, Greek, and Ethiopian endbands. Also included at the beginning is a description of the materials used. While presented much more simply, the diagrams in Jäckel’s style can easily be followed, especially if traced in two colors for the different colors/ends. (Verheyen)

Green, Arthur. 2016. "A compensation endband: a structural endband for a book with uneven edges" (link to subscription journal). Journal of the Institute of Conservation 39 (2).

Abstract: "This paper describes a structural endband that was developed for use on MS. Laud Misc. 99; a late-medieval parchment manuscript recently rebound at the University of Oxford’s Bodleian Library. Whilst the endbands were an important part of the new wooden board binding, it was challenging to work them on the tail edge of the book because of the uneven quires and the desire to use boards of equal height. The solution was to develop compensation which would support a straight endband that laced evenly onto both boards whilst maintaining its structural function."

Greenfield, Jane and Jenny Hille. 2017. Endbands from East to West: How to Work Them.. New Castle, DE: Oak Knoll Books.

The article presents a brief overview of the history and function of endbands, as well as the materials used. In doing so, it “relates these early forms to the work at the Bibliotheca Nazionale Centrale Firenze (BNCF), showing the sound functional basis for the methods adopted there.” Illustrated with diagrams, the article describes and presents instructions for sewing the following endbands: “early”, stuck-on, coloured silk, BNCF with more detailed inscructions, laced-in, and decorative sewings. (Verheyen)

See Gast, Monica for endbands described. Jäckel provides prose instructions for completing these. Easier to follow are his diagrams that can easily be followed, especially if traced in two colors for the different colors/ends. (Verheyen)

Lauder, Alfred. 2000. A Textbook for Rebinding Rare Books Based on a New Technical Principle. Guild of Book Workers Journal 36 (1).

Matthews, William. [1929]. Bookbinding; a manual for those interested in the craft of bookbinding. New York: E. P. Dutton and Co. Available online through Hathi Trust.

Digital image of a variety of endbands, with detailed views of each one.

Middleton describes the creation of a sewn on, single core, front bead endband, made of two colors of silk thread with tie-downs every third or fourth section. He also describes the history of various styles of endbands and suggests that rebinders and restorers should, when replacing old endbands, make them in imitation of the original or by following historical exemplars.

Roberts, Matt and Don Etherington. 1982. Bookbinding and the Conservation of Books: A Dictionary of Descriptive Terminology. Washington DC: Library of Congress. Available online through CoOL.

Szirmai, J. A. 1995. Carolingian Bindings in the Abbey Library of St. Gall. Making the Medieval Book: Techniques of Production. The Red Gull Press.

Szirmai, J. A. 1999. The Archaeology of Medieval Bookbinding. Aldershot: Ashgate.

Town, Laurence. 1963. Bookbinding by Hand for Students and Craftsmen. London: Faber and Faber.

Prior to the creation of the AIC Conservation Wiki, this page was created as "Section 3 - Chapter 3 - Endbands" of the Book Conservation Catalog by Donia Conn. For more see: History of the BPG Wiki.

Retrieved from "https://www.conservation-wiki.com/w/index.php?title=BPG_Endbands&oldid=56442"
Categories:
This page was last edited on 5 May 2022, at 21:13.
Privacy policy
About Wiki
Disclaimers