This page covers the structure and conservation of East Asian book formats. See also: Book Boards, East Asian Scrolls, and Fastenings and Furniture. For information on other binding traditions, see Bookbinding Traditions by Region or Culture.

There is a rich history in the West of collecting books from East Asia, predominantly from China, Korea, and Japan. Woodblock imprints started to arrive in significant numbers in the US during the second half of the 19th century, brought over by missionaries or as gifts from governments, scholars, and students of East Asia. The top 10 largest East Asian rare book collections in the United States are held at the following institutions:

Bibliography and philology is very interconnected between the three countries, therefore studying the history of the book across East Asia will assist a conservator in making the appropriate, culturally sensitive decisions when major intervention is required, such as re-binding, extensive paper repair, and new housing.

Jesse Munn’s important article in the Journal of the Institute of Conservation (2009) should be carefully studied by anyone working with East Asian collections. A direct link can be found here: Side‐Stitched Books of China, Korea and Japan in Western Collections. Her work emphasizes the importance of cultural sensitivity when approaching materials from different countries that appear similar on first glance but have varying characteristics that must be respected and preserved by the conservator.

The following information was collected during a course taken through the California Rare Book School, titled The History of the Book in East Asia. This course was held in 2014 at the University of California, Berkeley’s C.V. Starr East Asian Library, taught by Peter Zhou and Deborah Rudolph.

East Asian books may be considered rare or remarkable for one or more of the following distinct elements:

Characteristics particular to country of origin:

Historically, local book collectors would purchase books and immediately replace the covers and cases. Rebinding volumes was very commonplace. Therefore, the number of chapters is important because when books were rebound, volume numbers changed but chapter numbers remained the same. It is also important to note that book dealers would sometimes remove content that might identify the date of an engraving, add forged (or real) ex libris seals, and add a different title. Other printers’ practices to watch out for include the production of pirated editions from print copies and passing off facsimiles as older editions.

Today the principals of book conservation in East Asian countries align with Western principals: preserve the original look and feel of the book, intervene as little as possible, and conduct treatments that may be reversed if needed in the future.

Important parts of a book that may not be original but were added by the collector and must remain in situ (particularly in Chinese bindings):

Placement of key elements of the book, important if considering collation: 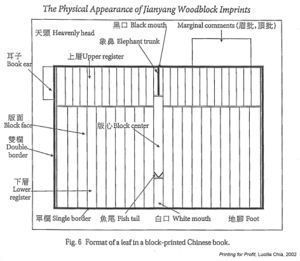 Format of a leaf in a block-printed Chinese book

Important aspects of the leaf layout (see illustration for detail on terminology):

Brokaw, C. 2005. On the History of the Book in China. In Printing and Book Culture in Late Imperial China, edited by Cynthia, B and Chow, K.W, 3–54. Berkeley: University of California Press.

Chinnery, T. 2007. Some Characteristics of the Dunhuang Booklets. The International Dunhuang Project.

Kornicki, P.F. 1998. The book in Japan: A cultural history from the beginnings to the nineteenth century. University of Hawaii Press.

McKillop, Beth. 2010. The History of the Book in Korea. In The Oxford Companion to the Book, edited by Suarez, M.F. and Woudhuysen, H.R, 366–373. Oxford: Oxford University Press.

This page was created in November 2021 from content previously found on the Bookbinding Traditions by Region or Culture page under the heading "East Asian Bookbinding".

Retrieved from "https://www.conservation-wiki.com/w/index.php?title=BPG_East_Asian_Book_Formats&oldid=56148"
Categories:
This page was last edited on 14 April 2022, at 21:58.
Privacy policy
About Wiki
Disclaimers