(This chapter is thus far limited to English sources)

1) Types of Board, years, identifying, examples and issues:

Leather is rarely used as a board material, but Middleton does note two examples, one from the 12th C and another from the early 16th C.

Wood was the standard book board material until the 16th C. The wood was usually quarter cut to prevent warping. Oak was common in medieval English books. Birch, poplar, and pine were common in Scotland. Wooden boards began to be replaced by pasteboards in England in about 1500 and were uncommon by 1550. Some places, like Oxford and Scotland, used wooden boards until about 1700.

Pasteboard began to be used in the early 1500s and was common by 1550. It was a standard book board material from 1600 through 1900. Made by pasting leaves of paper together, this board can be distinguished by its laminate structure. The paper layers were generally made up from discarded printed sheets or poor quality, unsized blank paper.

Middleton describes waterleaf as a variety of pasteboard. It is formed while the paper is still wet; the pressing together of the wet pages forms a tight bond between the layers which is more difficult to delaminate than traditional pasteboard. The resulting boards are sometimes then pasted to each other to form a thicker board. This thicker board frequently delaminates along the paste layers.

Formed on a mold from pulped paper and board scraps. The finished pulpboard frequently contains visible traces of is origins: printed text, fabric scraps, vellum shavings, wood chips, straw. Middleton introduced the term “pulpboard,” but it appears to be in common usage now.

Variously known as scabboard, sca'board, scaberd, scabbard, scabard, scaleboard, and scale-board. Very thin wood, like a shingle. Small retail bindings. Frequently used in 17th to early 19th C America (esp. New England), where paper was scarce and expensive. Scaleboard was a mass-produced material made by craftsmen known as "scale board cutters," who split the thin board using an engine plane. Scaleboard was produced primarily for the box-making industry, but was also used in making scabbards, baking trays, typesetting reglets, etc. See Miller 2013, Townsend 2013, Wolcott 2013, and Williams 2017.

Began to be used for lower grades of binding (like yellow-backs) in the 1860s before becoming a standard board material by the 1880s.

Inventories of binderies make it quite apparent that binders made their own pasteboards, and they seem to have done so until late in the seventeenth century, and possibly later, when they seem to have been marketed by manufacturers (Middleton, 65).

For further sources, please visit the Bookbinding Traditions by Region or Culture page. Additional suggestions and sources are welcome.

Most commonly, splits in wooden boards are mended using hide glue or gelatin (see Middleton 2004, Wolcott 2013), though epoxies and acrylic resins have also been used. Mechanical reinforcement, such as dowels, have been used to reinforce splits on large wooden boards (see Clarkson 1999). Strips of parchment or paper can be adhered to provide exterior reinforcement (see Hagadorn and Peachey 2010).

Large losses on a scaleboard, shown before, during, and after a bulked epoxy fill (Williams 2017).

The selection of fill material should depend on the size, nature, and location of the areas of damage. Newly shaped wood can be used to compensate large areas of loss. A wooden fill can be attached via adhesive (hide glue, gelatin, Paraloid B-72) or mechanical attachment (dowels, butterfly joins), though the latter is more invasive and requires the original boards to be thick (see Middleton 2004). For smaller areas of loss (such as wormholes) or for damage too complex for a carved wooden fill, an adhesive-based fill can work more easily. Adhesives can be used for fills with the addition of a bulking agent, such as wood dust, cellulose powder, or microballoons. Commonly used adhesives include hide glue and wheat starch paste (see Middleton 2004), Paraloid B-72 (see Ralph 2014), and epoxies (see Quandt 1991, Aubry 2009, Williams 2017). Also available are pre-bulked epoxy putties that are designed to mimic the mechanical properties of wood. Because they harden through a reaction, rather than through drying, epoxies lose little to no volume, making them ideal for filling losses. Due to their irreversibility, though, they require the initial application of a reversible barrier layer; the most commonly used reversible barrier layer for wood is hide glue or gelatin, though Paraloid B-72 has also been used (see Williams 2017).

Losses are also common in fiberboards, though these losses are typically of a different nature than those on wooden boards. Losses are most common at the corners where covering materials have worn away. Small losses can be filled by making a cellulose-based pulp or putty out of wheat starch paste and fibers; shredded Japanese papers and linen cords are commonly used for this process. When losses are too large for pulp fills alone, an extension can be built from layers of Japanese paper adhered between layers of the original board. Paste pulp can then be added to the extension until the desired thickness is achieved. (This layered fill material should avoid being stiffer or stronger than the original board.)

One of the most common forms of damage on non-wooden boards (pasteboard, waterleaf, pulpboard, millboard) is delamination or fraying at the edges and corners where the covering material has been lost and the board is exposed. Layers can be readhered with wheat starch paste, though often the layers first need to be flattened or reconfigured using a microspatula. Once the area has been saturated with thin paste, it should be dried under pressure. A bulldog clip or clamp can be used in conjunction with layers of board, blotter, and non-woven polyester (Reemay or Hollytex). Once dried, replacement covering materials can be applied to protect the board from future damage. This process is also known as "consolidating board corners."

What is a board?[edit | edit source]

Sources commonly describe boards as rigid, flat sheets, which may be composed of a variety of materials, and are the central component of book covers. Both Etherington and Roberts and Ligatus emphasize that boards serve to support and protect the text block. Etherington and Roberts use the term "board" to describe thick paper and the term “boards” as pieces of flat sheet material used to assist in gripping books during various stages of binding. They use "binder’s board" as a general term for the component of the book which encompasses pasteboard, millboard, strawboard, chipboard, and rag board. For the purposes of this Wiki page, the terms "board" and "boards" will refer to the component of book covers.

Boards as a subset of components

Boards as a subset of sheet materials Board as it is manufactured in large sheets before being cut to size as the boards for use on individual books.

back cornering: the act of cutting away a small triangular piece of the board corner at both the head and tail of the spine edges, in order to reduce strain on the joints caused by the additional thickness of the covering material when the book opens (Etherington and Roberts). 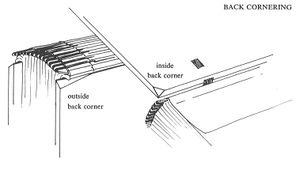 Back cornering from Etherington and Roberts (1982). Drawings by Margaret R. Brown.

beveled boards: usually large, heavy boards, often wood, that have been sanded or otherwise shaped at the edges. Boards may be beveled on the outside, inside, or both, and on some or all of the edges. The manner in which boards are beveled can help to support other material evidence regarding a book’s relative time-period and culture of origin. (Etherington and Roberts)

binder's board: Etherington and Roberts use this as a general term encompassing fibrous and/or laminated boards, including pasteboard, millboard, strawboard, chipboard, and rag board. Middleton says this is synonymous with millboard.

made boards: a board that is created from a thinner board and a thicker board adhered together by the bookbinder or conservator. This may be desirable for large books that need thicker boards than are available through manufacturers. (Etherington and Roberts)

yawning boards: boards that are warped and curve up and away from the fore edge of the text block. This condition is often seen with books that have parchment coverings. (Etherington and Roberts)

Boudalis, Georgios. 2016. "The Transition from Byzantine to post-Byzantine Bookbindings: A Statistical Analysis of Some Crucial Changes." Book and Paper Conservation 2: 12-29. Accessed online through Academia.edu April 15, 2020.

Details the selection and shaping of wooden book boards with many illustrations. Bibliography includes resources on historical wooden boards and their conservation. Croft advocated for boards that are what he calls "God’s Plywood", distinguished by the following characteristics (shortened to VGSGTQ):

Hagadorn, Alexis and Jeffrey S. Peachey. 2010. “The Use of Parchment to Reinforce Split Wooden Bookboards, with Preliminary Observations into the Effects of RH Cycling on these Repairs.” Journal of the Institute of Conservation. 33 (1): 41-63.

Hepworth, Paul and Karin Scheper. “Terminology for the Conservation and Description of Islamic Manuscripts.” Accessed November 11, 2019.

Honey, Andrew, and Athanasios Velios. 2009. “The Historic Repair and Reuse of Byzantine Wooden Bookboards in the Manuscript Collection of the Monastery of St Catherine, Sinai.” In Holding It All Together: Ancient and Modern Approaches to Joining, Repair and Consolidation. Ed. J. Ambers. London: Archetype and British Museum. 68–77.

Jaques, Shulla. 1999. “A Brief Survey of Paper Board and Some of the Literature Describing it with Some Definitions of Marketing Terms for Mount Boards Used in Conservation.” The Paper Conservator 23. 1-1

Lavier, Catherine. 2005. “Wood in the history of medieval book techniques: aims and know-how. First restorations.” Proceedings of Care and Conservation of Manuscripts 8, the eighth international seminar held at the University of Copenhagen. Copenhagen, DK. 19-33.

Malley, Mike. 2013. “Paste and Scale Board Makers in the Late Georgian Period.” The Quarterly: The Journal of the British Association of Paper Historians 85: 1-10.

Merian, Sylvie L. 1998. “The Armenian Bookmaking Tradition in the Christian East: A Comparison with the Syriac and Greek Traditions.” In The Bible as Book: The Manuscript Tradition, edited by John L. Sharpe III and Kimberly Van Kampen. London: The British Library, New Castle, DE: Oak Knoll Press, in association with The Scriptorium Center for Christian Antiquities. 205-214.

This book provides an excellent introduction to Western book binding styles, and is particularly notable for the wealth of bibliographic references to explore topics in greater depth, the attention paid to the more prosaic bindings of various time periods, and the great color images on the accompanying CD. Many references to wooden boards and paper boards. The author has also written about scaleboard.

Describes the results of a survey of 858 scaleboard bindings. Many images illustrating commonalities and variants of the type. Miller speculates about Boston as center of this type of binding. Some interesting aspects of scaleboard bindings discussed are: horizontal grain direction of board, long and shallow backcornering, notched spines, tawed thong sewing supports stabbed through the gutter, and an asymmetrical blind tooling pattern.

Paterson, Dan. 2008. "An Investigation and Treatment of an Uncommon Ethiopian Binding and Consideration of its Historical Context." The Book and Paper Group Annual 27: 55-62.

Quandt, Abigail B. 1991. “The Documentation and Treatment of a late 13th Century Copy of Isidore of Seville’s Etymologies.” The Book and Paper Group Annual. 10.

Song, M. 2009. "The History and Characteristics of Traditional Korean Books and Bookbinding." Journal of the Institute of Conservation 32 (1). 53-78.

The author examines six copies of this imprint bound in scaleboard. The author notes many of the same features as Miller's chapter in the same book, and he is able to draw conclusions about the production of this volume and early American printing and binding.

Reviewed in the Conservators Converse Blog

Prior to the creation of the AIC Conservation Wiki, this page was created as "Section 3 - Chapter 4 - Boards" of the Book Conservation Catalog by Chela Metzger. For more see: History of the BPG Wiki.

Retrieved from "https://www.conservation-wiki.com/w/index.php?title=BPG_Book_Boards&oldid=51930"
Categories:
This page was last edited on 26 February 2021, at 20:55.
Privacy policy
About Wiki
Disclaimers