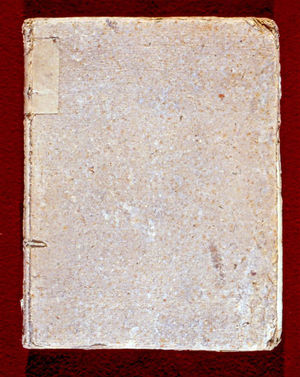 A binding demonstrating the use of paper to create a non-adhesive limp structure, related to a limp vellum binding

Paper has long been an affordable option for binding and rebinding books. This article focuses on Western European styles of binding books; many or most East Asian bookbinding structures rely on paper as a main support, but those styles are typically only feasible for bindings using East Asian materials, such as mulberry paper.

While paper lacks the strength of other historic and contemporary binding materials such as leather, vellum or cloth, it is or can be made sufficiently strong to support small books, and has many desirable qualities for use as a conservation binding material. Paper is flexible, lightweight and strong. It is easy and quick to work with and requires minimal equipment. In addition, book conservators typically already have established supplies or sources of conservation-grade papers of many types and weights, making experimentation easy.

Italian, German and French books bound in handmade paper have been found dating from as early as the fifteenth century and range from simple folded wrappers to laced-in cases. The earliest examples are woodcut-printed wrappers, from Augsburg and Ferrara in the 1480s and 1490s.

Pamphlets have often been bound in simple paper wrappers. This could take the form of a single folded sheet to protect the printed material inside, stitched with the printed material, or a decorated paper sheet could be glued to the stitched materials, stiffening the blank sheet and decorating the book. Works printed and bound in this manner were often side-sewn.

Wrappers were a common feature of 18th-century books, which were typically sold unbound by the printer. A blank, decorated, or waste sheet would be glued to the spine of the text block, which was sewn with a temporary two-hole unsupported structure. These bindings were temporary but often survive to the present day.

German “lapped paper” cases were popular starting in the seventeenth century. Very similar to modern paper over boards cases, they consist of pasteboards spanned and bonded together by heavy paper.

In the early 19th century, paper was used by the publisher to cover the sides of books and adhered to boards in a temporary case structure, intended to be replaced by the end purchaser’s leather binding. Over the course of the 19th century, however, paper bindings became more elaborate and rebinding in leather became less common, leading to the commercial publishers' paper-over-boards case bindings that are common today. 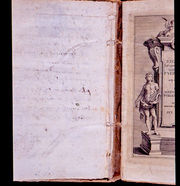 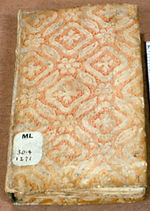 There are adhesive and non-adhesive options for binding or rebinding books in paper.

Heavy handmade paper was sometimes layered with adhesive and made stiff like a thin board. The spine area of the cover was left thinner and pasted and molded into a tight back. The sewing supports were then laced through or between the layers and also stuck down with adhesive. Sometimes this style of binding had an outer wrapper made from decorated paper.

Another use of paper as a binding material resembles the limp vellum binding structure, where the text is sewn onto supports (likely alum tawed skin thongs) laced through the joint and back into the paper cover. The cover is cut to a pattern with mitered corners and fore edge flaps, scored and folded to form a non-adhesive limp binding.

Conservation treatments of paper bindings has historically often involved replacing these structures, viewed as "temporary," with historically-appropriate "permanent" structures. However, there is a growing recognition of the need to preserve these structures, and of the valuable information that they provide into the changing nature of the book trade.

Barber, Giles. 1992. “Brochure, Cartonnage, Reliure: The Provisional Protection of Print in the Later 18th Century.” In Rousseau and the 18th Century: Essays in Memory of R. A. Leigh, 43–57. The Voltaire Foundation.

Cloonan, Michèle Valerie. 1987. “European Paper-Covered Books from the Fifteenth through the Eighteenth Centuries.” Books at Iowa 47 (1): 8–16.

Jackson, William A. 1952. “Printed Wrappers of the Fifteenth to the Eighteenth Centuries.” Harvard Library Bulletin 6 (3).

Julia Miller's book below references Lock's observations of case bindings of made of paper over thin wooden boards.

Loring, Rosamond B, and Philip Hofer. 1952. Decorated Book Papers. Being an Account of Their Designs and Fashions ... Second Edition. Edited by Philip Hofer.

The first edition was published in 2010. The second edition, published in 2014, contains a new section about early canvas bindings, and additional images have been added to the book and DVD. Discusses the history of paper case bindings. Many illustrations.

Roberts, Matt T. and Don Etherington. 1981. Bookbinding and the Conservation of Books: A Dictionary of Descriptive Terminology. Library of Congress. Accessed March 18, 2020.

Referenced in Julia Miller's book above.

Retrieved from "https://www.conservation-wiki.com/w/index.php?title=BPG_Paper_Bookbinding&oldid=51928"
Categories:
This page was last edited on 26 February 2021, at 20:50.
Privacy policy
About Wiki
Disclaimers