DUPLICATE OF PAGE FOR EDITING

Watermarks are created by additional wires sewn into the wire paper mould which displace the fibers during formation to create an area of less density. Light travels with less obstruction through this area and will appear as an image, letters, and/or numbers in transmitted light. 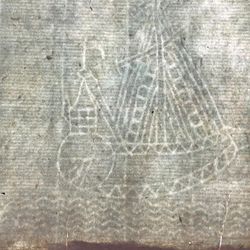 In the digital age, the word is used to describe a marker embedded in audio, video or image files to denote copyright. The majority of results for online searches of the term will lead to this kind of watermark.

The first watermarks appeared on Fabriano paper by about 1293 (the date varies in different sources) and quickly spread throughout Europe. They were most common from the 15th through the 19th centuries. It is not always known what every watermark symbolizes. While they are generally trademarks of the papermaker, some indicate the paper size. Papermakers sometimes used different watermarks for different markets. While watermarks can sometimes be used to determine the date and location where a paper was made, they can be unreliable because papermakers imitated watermarks that were popular; old moulds were reused by other papermakers; and loose wires may have been reattached in slightly different locations.

The first documented use of the English word "watermark" for these designs in paper was in 1790 in a British patent granted to John Phipps to create watermarked lines in paper. In German, they are called wasserzeichen or papierzeichen. The French use the term filigrane. The Dutch call them papiermerken. The Italians and Spanish use the word "filigrana" but sometimes Spanish speakers use the more elaborate term "filigranas o marcas invisibles."

Watermarks can be found in both handmade and machine-made papers. In the 19th and 20th centuries, more elaborate watermarks were made for security of banknotes and for artistic purposes. This page is generally focussed on traditional watermarks in handmade western papers.

Some papers from the 16th - 19th century will have a second watermark called a countermark; often on the opposite side of the paper. The countermark is usually smaller and simpler, featuring a date, letters, or a small symbol. When the paper being examined is a portion of the original sheet, it may be hard to tell whether you are looking at a watermark or a countermark.

The Arms of France watermark usually depicts three fleur de lis inside a shield under a crown. The Arms of Burgundy watermark is similar, but the shield is divided into four sections that may contain initials, stripes, fleur de lis and/or lions. History and examples of Arm of Burgundy here and here.

This symbol came to denote a folio size of paper. The name is derived from the Italian "foglio-capo." [insert note: Clayton Beadle. The Development of Watermarking in Hand-Made and Machine-Made Papers. Journal of the Society of Arts, Volume 54

Society of Arts (Great Britain), 1906: The University of California.]

This symbol was created to commemorate the liberation of the Netherlands from Spanish control in 1851. Ogierman 2017 There are two main variants of the ProPatria watermark: 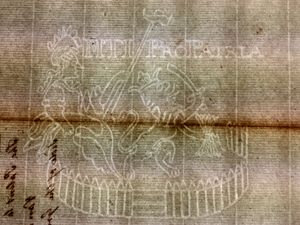 * three circles with a crown or cross
* Griffins holding a shield

Famous Papermakers and their watermarks[edit source]

To enable online searches for watermarks in databases (see list below), it is necessary to standardize the information that describes each watermark.

The simplest way to record a watermark is to place the paper in transmitted light and trace the watermark onto a piece of transparent paper or plastic placed on top. There are some problems inherent in this method that make it the least reliable in recording the watermark data without introducing error. The paper may shift slightly during the tracing. It is difficult to consistently hold the writing utensil directly over the lines being traced without leaning to one side or another. There may be damage, folds, imperfections, or media on the paper that get mistaken for part of the watermark.

However, if this is the only method available, weigh the papers down to prevent shifting. Lower the light table so that you can look straight down on it. Work slowly and carefully. Include all chain lines in the vicinity of the watermark and a sampling of the laid lines, perhaps in a different color. If possible, include the mark and countermark (if applicable) on the same tracing so that their exact distance and relationship is clear.

This method, also sometimes known as the "Ilkey method" was more common in the age of darkrooms. High speed film is placed under the watermark, exposed to light, and developed. 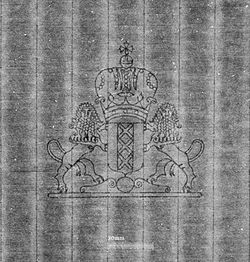 CAMEO describes this technique in their page on Beta radiography.

In 2018, the paper lab at the Art Institute of Chicago developed a protocol for beta radiography that replaces the Kodak film with phosphor-coated imaging plates. This offers several advantages including: a larger surface area, higher sensitivity to beta rays, lower sensitivity to visible light, and they are reusable. Practically, these features translate into significantly shorter collection times (between 10-40 minutes, depending on the thickness of the support), a setup that is safer for the art (i.e. does not have to be carried out in total blackness), and a digital image that is easily manipulated with basic Image Pilot Konica software. The method is detailed in their "Beta Radiography Protocols" (Rivera Ramos and Broadway 2019).

Place the watermarked paper on a transmitted light source that is as even as possible. Position the camera in a level plane directly over the paper. Try different exposures to find the one that captures the watermark as clearly as possible. Unlike other conservation documentation, it is not necessary to capture the true color of the paper with this image. See Digital Manipulation of Watermark Images (below) for tips on enhancing the photograph further.

Images of watermarks can be dramatically improved by digital manipulation. The following are examples of a technique developed by Claire Valero for enhancing transmitted light images. Ms. Valero presented the technique at the BPG Tips Session at AIC Annual in Houston. The handout and training videos are available on the BPG Annual Meeting Tips Sessions page . The technique is also described in Conservation Highlights on the Library of Congress Preservation Directorate website.

This is a system of capturing a series of images where the camera and the object are in the exact location, but the light source is in a different position for each image. Software is used to compile these images into one synthesized RTI image that captures surface three-dimensionality and can be manipulated within the software to reveal a watermark. More information here.

-This portal was developed by the International Association of Paper Historians to allow searches in different languages and simultaneous access to remote distributed databases. It includes NIKI, Piccard-Online, WILC, WZMA and other databases.

Videos and pdf handout for this tip are available on the BPG Annual Meeting Tips Sessions page.

Valero, Claire and Mary Oey. 2018. "Enhancing Watermark Images: A Photoshop Method". Conservation Highlights. Preservation Directorate Website, Library of Congress.
Wenger, Emanuel and Marisa Ferrando Cusi. 2013. “How to Make and Organize a Watermark Database and How to Make it Accessible from the Bernstein Portal. A Practical Example: IVC+R Database.” Paper History - Journal of the International Association of Paper Historians 17 (2) : 16-21.

References to be added:

The article above has a nice bibliography that is worth looking at for more references. --Denise Stockman (talk) 13:31, 17 October 2018 (CDT)

W. A. Churchill, Watermarks in paper in Holland, England, France, etc, in the XVII and XVIII centuries and their Interconnection (Amsterdam, 1935)

The International Association of Paper Historians

Handmade Paper on the Web

History of This Page[edit source]

This page was created through an April 2018 Call-for-Content to the BPG listserve.

Retrieved from "https://www.conservation-wiki.com/w/index.php?title=Talk:BPG_Watermarks&oldid=45059"
Categories:
This page was last edited on 16 June 2020, at 20:20.
Privacy policy
About Wiki
Disclaimers