Introduction of moisture directly or indirectly into the design and/or paper support.

Conservation of support to realign paper fibers in order to reduce sheet distortions such as cockles, strain or rolling; realign deformations in the sheet such as creases, folds and ridges; reestablish original configuration of the paper, such as original flatness, platemark or embossing.

Conservation of media to consolidate pigments by reviving aqueous binders; relax desiccated gums and resinous lakes, etc. Restore moisture content of solvent treated papers. Soften support so that a new dried configuration can be achieved. Relax sheet in preparation for dry-lining or washing, or suction table work, or expand sheet for stretch drying with edges weighted or confined.

Original Compilers: Doris Hamburg, Dianne van der Reyden, and Tim Vitale
For a full list of the original contributors to this page, see the section below on History of This Page.
Wiki Compilers: Michelle Hamill and Jill Iacchei
Wiki Contributors: Karen Danby, Marie-France Lemay, Roger Williams your name could be here

The media's solubility in water should be considered when selecting the method of humidification. Gentler methods of humidification should be used for highly soluble media, which may bleed or sink into the paper support if over-humidified.

Tendency of Support or Media to Water Stain[edit | edit source]

Degree to which Humidification is Desirable[edit | edit source]

Should not provide sources of iron, copper, chlorine, etc. which may be dissolved into water used for humidification.

Generally designed and sold for spraying paint, though may be adapted for spraying water; sprays may be categorized according to droplet size ranging from fine mists (category I) to coarse sprays (category VI)

Use smaller tips and needles; use no or moderate fan control; flow of the water is controlled by the trigger, bar or button; the air supply is adjusted to between 20–40 psi. The air flow is generally turned on at the very start of the travel of the triggering device used as the flow control. The force of the air atomizes the water as it emerges around the needle, through the opening in the fluid tip, where it is also thoroughly mixed with the air. The relatively high pressure will move the small, low mass (lighter than dust) droplets out so they will not coalesce.

Keep pumped up; watch out for corrosion.

Use strong, even strokes.

Category V: Non-uniform spray, very large droplets always present in sizable quantities, which may be up to 1/8” to 1/4” in diameter. Extremely large droplets at end of pump or spray stroke as pressure drops off.

Use strong even strokes.
“Tightened-down” tip settings best for fine even spray. 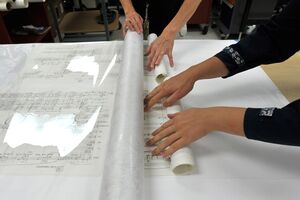 A rolling moisture sandwich in action.

A "rolling moisture sandwich" is used to humidify and flatten groups of rolled paper materials en masse. The technique is adapted from a method originally published in Paper – Line – Light by Eva Glück, Irene Brückle, and Eva-Maria Barkhofen (2012).

Introduces hot to warm water vapor. This is generally a local treatment which may be used to soften adhesive, but it is also use humidify difficult papers quickly. General Treatment Steps

To achieve slow or quick and efficient wetting with control over the amount of moisture. Need to consider droplet size, uniformity of droplet size, and speed of application.

The mist should be played out over the support in a cloud; not in a fan (created by allowing air to flow through the fan adjustment valve) as a varnish would be sprayed onto a painting. The density of the cloud can be controlled by the size of the spray equipment, after overall eveness of the cloud has been achieved. Air pressure and water flow can be altered to achieve desired results. Categories II and III equipment is generally used.

Water is usually sprayed in alternating layers (obverse and reverse; with design across design) in whatever scheme is required. Category III, IV and V equipment can be used. Fan controls are used to develop a longer, narrower spray pattern.

1. The spray is applied in overlapping rows until the first coat of moisture has been applied to the objects.

2. The support is then turned over and the other side is sprayed.

3. The third coat (layer) is applied to the obverse (front) or reverse (back) depending on which side the spray started. Spraying from the back first may reduce the amount of times the front must be sprayed as well as reduce the number of times the wet media is turned face down. It is suggested that the spraying be dividedd into serveral coats, 6–2 to aid in control; Humidification may need to stop after the second or fourth coat of water.

4. Continue as above until the support has become as limp as required.

May be used locally or overall

May be used locally or overall.

Caldararo, Niccolo. 1992. Tests on the effects of the use of ultrasound in the humidification of paper. The Book & Paper Group Annual 11: 1-20.

Clarkson, Christopher. 1992. A conditioning chamber for parchment and other materials. The Paper Conservator: Journal of the Institute of Paper Conservation 16: 27-30.

Daniels, Vincent. 1998.The effects of water treatments on paper with applied pastel or powder pigment. The paper conservator 22:29-37.

Mackay, Gina and Robert Lodge. 1986. Removing severe distortions in a pastel on canvas. The Paper Conservator: Journal of the Institute of Paper Conservation 10: 24-26.

Masson, Olivier and Westby Percival-Prescott. 1987. The use of lascaux humidification chamber in the treatment of works on paper. Paper conservation news 43: 4-7.

Sugarman, Jane E., and Vitale, Timothy J. 1992. Observations on the drying of paper: five drying methods and the drying process. Journal of the American Institute for Conservation 31(2): 175-197 .

BPG Wiki
In 2009, theFoundation for Advancement in Conservation (FAIC) launched the AIC Wiki with funding assistance from the National Center for Preservation Technology and Training (NCPTT), a division of the National Parks Service. Along with catalogs from other specialty groups, the published Paper Conservation Catalog and the unpublished Book Conservation Catalog were transcribed into a Wiki environment. In 2017, Jill Iacchei and Michelle Hamill reformatted this page by removing the legacy numbered outline format and improving internal links.

Retrieved from "https://www.conservation-wiki.com/w/index.php?title=BPG_Humidification&oldid=55980"
Categories:
This page was last edited on 3 March 2022, at 21:18.
Privacy policy
About Wiki
Disclaimers