Since the 1850s, pioneer photographers experimented with various organic materials to be used as a binder to hold the silver on glass plate negatives. The British Richard Maddox was the first to publish a working method using gelatin in The British Journal of Photography in 1871. In this article, Maddox described how he mixed gelatin, water and silver halides, coated the resulting emulsion onto a clear glass plate, and left it to dry. After he exposed the sensitized plate to sunlight, he poured his development solution made of pyrogallic acid and silver nitrate onto the plate, washed it, and then fixed it with a regular solution of hyposulfite of soda. At the end of the paper, he concealed that many adjustments had to be refined. Indeed, the process proposed by Maddox was not immediately successful – it was actually less light sensitive than collodion plates – but it was a major starting point which would be followed by many improvements in the following years, leading to what would be a revolution in the history of photographic processes. The major improvements following Maddox’s publication in the 1870s:

These improvements led to a photographic negative made and sensitized in advance, which could be kept for months or years without losing its light sensitivity.

In 1878, the English Company Wratten and Wainwright started to produce gelatin dry plates in London. Quickly after that, in the United Stated the process began to be developed at an industrial scale.

The industrial development in the US[edit | edit source]

The American industrials quickly perceived the advantages of the British invention: the increased sensitivity and the less perishable photosensitivity, made this process perfect for industrial production. Between 1879 and 1885, 3 companies started to produce glass plate negatives: Keystone, Cramer and Eastman, which will later become the Eastman Kodak Company.
The genius of George Eastman was to conceive and develop early on a machinery for the coating of plates and to patent it in the US and in Europe. In the 1880s, the sector reaches its apogee, many companies produce gelatin glass plates and are completely independent from the beginning to the end of the production chain. Major technical issues as solved during that decade, such as the extension of the area of light sensitivity of the emulsion to green and yellow (orthochromatic plates, erythrosine dye, 1884, Eder).
The number of new companies that produce only dry plates increases enormously in the 1890s, while older companies like Eastman Kodak enlarge their conceptions of their enterprise by producing other photographic materials. The same decade, the problem of halation, which is a blurring effect caused when very bright lights were photographed against a dark background, was solved by adding an opaque layer between the glass and the emulsion or on the back side of the glass to prevent the light from reaching the glass during the exposure (non-halation plates), which became quickly adopted by all the major companies.

By the early 20th century, professional photographers would be accustomed to using dry plates. They could buy a stock of negatives in advance and shoot their images later. The development could be done at another later point, as the latent image remained recorded, even several days or weeks later, thanks to the specificities of the gelatin silver developed out emulsion. 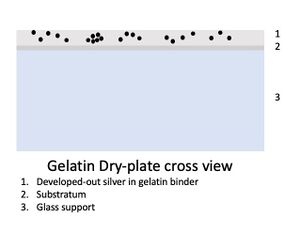 Image layer: The image material is made of silver, embedded in a gelatin binder. 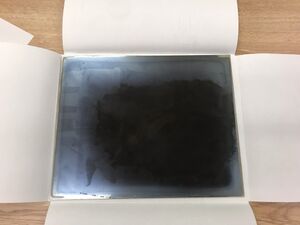 Color: The image material has a neutral grey to black color.

A very common deterioration of dry plate negatives is silver mirroring, which manifests itself in the form of blueish metallic sheen starting from the edges, sometimes covering the totality of the surface, and visible under reflected light. Improperly washed processing chemical can also be present on the negative as yellow or brown stains, visible in transmitted light.

Some dry plate negative exhibit an intense yellow color throughout their surface or locally. This is characteristic of negatives which exhibited a lack of density or contrast, and were therefore chemically intensified during a post processing step with a mercuric iodide or mercuric chloride solution. Over time, the mercuric halide has usually reacted with the silver making up the image to form silver iodide or silver chloride which are yellow and light sensitive.

Support: The gelatin binder lays on a transparent glass plate support of a thickness of 0.8 to 3 mm. According to the literature, most glass plates are first coated with a sub-layer or substratum made of gelatin hardened with chrome alum, to help the binder adhere properly to the glass support.

Before attempting any treatment, it is essential to note whether any original retouching media is present on the binder or the glass side since their integrity should be respected. 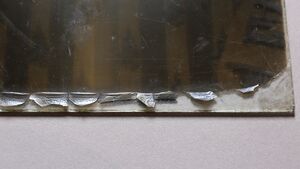 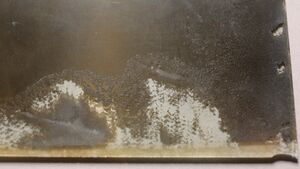 Depending on the typology and the extent of the emulsion lifting from the glass, various treatment techniques may be used. Historically, conservators have either removed the emulsion from the glass and stored it independently, transferred it onto another support, or used different adhesives to adhere the gelatin back onto its original support, with more or less success in the long term. To treat flaking emulsions, diluted gelatin applied with an ultrasonic mister has given satisfying results. When the lifting area is small, one can use a solution of warm gelatin applied on the glass surface to apply the gelatin binder back onto the support. Large areas of lifting emulsions are challenging, as an aqueous adhesive will likely cause the emulsion to swell and distort. In these cases, a less invasive approach to stabilize the object might be more suitable. For example, a protective sheet of glass can be attached to the negative, as for cracked plates.

Crystalline or slippery deposits may be visible on the non-image side of the glass. This can be a chemical deterioration of the glass – more frequent on 19th-century glasses – due to the manufacture and storage conditions of the object. Storing the plates in a ventilated, cool and stable environment will help slow down this irreversible degradation process.

Retrieved from "https://www.conservation-wiki.com/w/index.php?title=Gelatin_Dry-plate_Negative&oldid=55143"
Categories:
This page was last edited on 22 October 2021, at 19:58.
Privacy policy
About Wiki
Disclaimers