Mechanical deterioration “caused by distortion, such as a bend or curve, in a rigid or semi-rigid material.”(CCI, 1994) A structural distortion of the support that has become twisted, turned or bent out of shape and is no longer flat or in plane. (The Fine Arts Conservancy, Glossary) 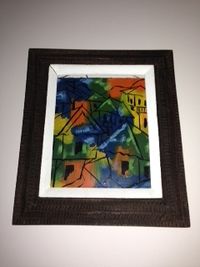 Unknown artist, untitledcityscape, acrylic on masonite, ca. 1990, 9.5 x 7.5 inches. The painting support has warped and is no longer in plane causing the gap between the top edge of the painting and the rabbet of the frame. 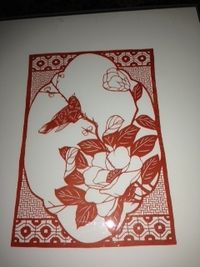 Unknown artist, untitled floral scene with bird and decorative patterns, Chinese hand cut paper, ca.1990, 6 x 9 inches. The paper has warped so that it no longer forms a rectangle with straight edges or 90 degree angles at the corners also causing distortion of the image in the center.

Not to be confused with the definition of warp for textiles referring to "the longitudinal threads of a tapestry." (Lennard and Hayward, 2006)

Different kinds of warps include cupping, bowing, crook, longitudinal, transverse, and twist. Cupping for wood based objects refers to deformation across the width of an object. It is most often seen on wide, unsupported or unrestrained sections of wood. (NPS, 2002) For the purposes of the definition cupping is not to be confused with the concave flaking of paint layers, also known as cleavage. (National Services Te Paerangi, 2010) Bowing refers to a singe curved distortion to an object's flatness along its length. Crook is "the departure from end to end straightness along the edge" of an object. (Hoadley, 1995) Longitudinal warp occurs when the object distorts along its grain. Twist refers to warping where all "four corners of a flat face do not lie in the same plane." (Hoadley, 1995)

Warping can be caused by environmental changes, storage, and/or display conditions. Some common causes include inappropriate and/or rapidly changing relative humidity (RH) and temperature levels resulting in the expansion and contraction of organic materials such as cotton, wood, ivory, and paper leading to changes in size and/or shape different from the original or intended form of the object; restrictions due to inappropriate mounting and framing; and heat from a fire can cause extensive warping of objects made from inorganic materials such as stone, glass, metal, and ceramic. (CCI, 1993) (CCI, 1993)

Suggestions for reducing the warping of objects include:

Retrieved from "https://www.conservation-wiki.com/w/index.php?title=Warp_(damage)&oldid=53245"
Category:
This page was last edited on 26 April 2021, at 06:40.
Privacy policy
About Wiki
Disclaimers