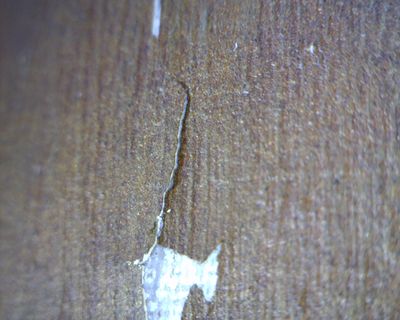 Cleavage in paint layers of an oil painting

Active cleavage refers to a separation about to flake off. Blind cleavage, also called flat cleavage, is a separation that has no visible rupture, but one can tell there has been an underlying separation of layers. Incipient cleavage is the beginning of a separation where the layers have curled up but are not yet free (Keck 1965).

In 1975 in The Care of Pictures, George Stout discussed the development of cleavage in panel paintings (paintings with a wood primary support), as the separation of the ground layer from the support often occurs in these types of paintings. First, the wood of the support moves laterally with the change in moisture content; when damp or humid, it swells, and when dry, it shrinks. Failure of the increasingly brittle ground to move with the support tends to break it loose from the support. Weakened by the deterioration of the medium and by strain, the ground layer cracks. It is broken loose near the cracks and is pushed slightly away from the support; this is known as buckling. Further movement in the support loosens flakes of ground and these may stay in place because they are lodged at their edges; this is known as cleavage.

Keck, Caroline. 1965. How To Take Care of Your Pictures. New York: The Museum of Modern Art & The Brooklyn Museum.

Retrieved from "https://www.conservation-wiki.com/w/index.php?title=Cleavage&oldid=54916"
Categories:
This page was last edited on 10 September 2021, at 09:50.
Privacy policy
About Wiki
Disclaimers