Flaking is the separation of small, thin pieces of material or coating from its substrate. 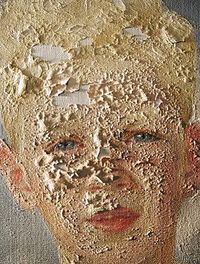 Flaking refers to the separating of small, thin pieces of a coating from the underlying layer, such as wood, canvas, or metal. It can also occur at stone surfaces, resulting in the detachment of small, thin scales of stone. Flaking is a surface or structural change. It is generally due to a combination of cracking and adhesion loss (CAMEO). Art paper and cheaper grades of coated cloth are more likely to have this issue.

Flaking can be caused by physical damage, changes in relative humidity, or corrosion. Unstable relative humidity can cause dimensional changes in the substrate, which can lead to the coating flaking off. Substrate layers, such as wood and canvas, absorb and release moisture as the relative humidity changes, causing dimensional changes. As the coating absorbs and releases moisture at a different rate than the substrate, the resulting stress causes it to flake off. Fluctuations in temperature, direct contact with water, improper coatings, or even materials and techniques used by artists, can also cause flaking. Once the paint layer detaches from the substrate layer, the process can continue, leading to loss.

To prevent flaking, paintings and other objects, should be stored at a relative humidity of 50% and in stable temperature. Objects should also be protected from excessive light. Flaking can be halted through a process called consolidation, which is a treatment that reattaches the flaking layers back to its substrate. This treatment can either be done locally, or to the entire surface, depending on the extent of the damage.

Retrieved from "https://www.conservation-wiki.com/w/index.php?title=Flaking&oldid=53206"
Category:
This page was last edited on 26 April 2021, at 06:28.
Privacy policy
About Wiki
Disclaimers