Please be patient, this part of the site is under development. We are starting to build out the Imaging Wiki.

“Normal or reflected illumination provides a record of the appearance of the object as seen under standard viewing conditions. Generally, this means using relatively flat and uniform illumination, with minimal surface glare, although this can vary depending on the kind of object and the purpose of the documentation record. For Before Treatment photographs, this image will also serve to record the relative prominence of disfigurements as seen in a normal viewing situation. These disfigurements or conditions can then be recorded more definitively in subsequent images using non-standard (non-normal) illumination techniques.” (Kushel 2017, p. 113)

“Copy stands are commonly used for smaller, two-dimensional objects, such as prints, drawings, photographs, and small textiles. While they provide many conveniences, copy stands often place restrictions on light placement, such as for axial and oblique specular illumination. Copy stands also have obvious limitations on the size of the object that can be photographed, depending on the column height, size of the platform, and placement of lights for uniform illumination.” (Kushel 2017, p. 117) 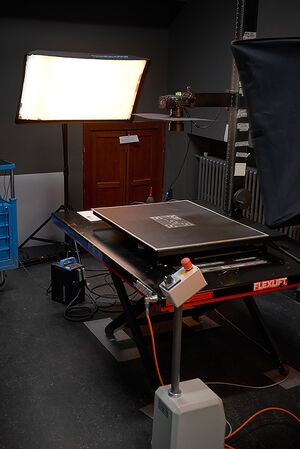 Figure 1: A camera mounted to a repro stand with lights equipped with softboxes at the Imaging Lab, KU Leuven. Imaging lab, CC BY SA

Whatever your choice of lighting, it is important to use the same lighting setup for before-, during-, and after-treatment photographs of the same subject. Otherwise, the rendering will not be consistent between treatment states and may not accurately represent your conservation treatment. Warda, et al. (2017, p.38).

“The light source can be simple incandescent fixtures (photofloods) or diffuse photographic light sources, such as fluorescent fixtures or HID sources (commonly installed in enclosures with diffusing screens). For relatively flat objects with pronounced texture (e.g., flat textiles), diffuse light sources, or a combination of diffuse and a single focused source, are generally best in order to avoid creating confusing sets of double shadows.

Lamps should be positioned approximately 25˚ from the surface plane of the subject; this will minimize surface glare. Positioning lights at 45˚, often mentioned in photographic manuals dealing with copy photography, is not recommended. This angle will nearly always result in unacceptable glare on any reflective surface unless other measures are taken (e.g., using polarized illumination or increasing the camera distance by using a longer focal length lens). In the studio, painting reference lines on the floor to indicate light placement increases efficiency and standardization.

To achieve uniform illumination across a subject’s surface, position lamps as far from the subject as possible. They should be aimed slightly beyond the far edges of a relatively flat object, not at its center. Uniformity of illumination can be measured with an incident light meter held at the center and all four corners of the subject.

Using barn doors on the lamps can further help even the illumination (especially at the edge of the object nearest the light) and help prevent light from striking the camera lens. If working on a copy stand, a lens hood or lens shade is essential. Always check the front of the camera lens to make sure that light from the lamps is not striking it. Standard lens shades often do not provide sufficient protection in these situations. Black paper taped to the shade can provide additional shading, if needed.” (Warda et al. 2017, p. 113) 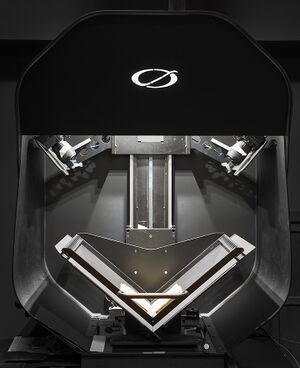 A budget solution for the V-shaped cradle used in book scanners and conservation copy stand is to use a book cradle or foam wedges used for supporting fragile books for viewing. These are commonly found in libraries or other institutions where old or fragile bound materials are handled. They can be used in combination with an existing setup.

Two-Dimensional Objects on an Easel or Slantboard[edit | edit source]

Raking light is an illumination technique where a single light source is positioned almost parallel to the object. As a result of the light placement, the surface topography and texture of the subject plane are emphasized through the creation of shadows. This examination technique can amplify the appearance of indentations, undulations, inlays, textile weaves, plate marks,  paint cupping, relief objects, and tool marks amongst others. Kushel (2017, p.116). Raking light is used primarily when photographing 2D objects to capture the surface topography. This approach brings out surface variances including brush strokes, cracks, folds, lifting pigments, and undulations in the substructure. It is particularly useful in documenting the condition and treatment of drawings, paintings, prints, and watercolors. Raking light can also be used for documenting the surface of 3D objects, though it is more effective with low-relief objects.

Following the general guidelines for ‘normal’ light photography, the scene should ideally include an conservation target which includes a gnomon or visual indicator for directional light, such as the RMI Conservation Target.

This technique involves positioning the camera and illumination source so that the camera captures a specular reflection off the surface of the object. Specular illumination is used to document surface topography and planarity,  variations  in  surface  sheen,  the  presence  of  coatings,  etc. With moderately reflective surfaces, such as paintings, specular illumination can sometimes be more informative  than  raking  illumination  in  rendering  surface anomalies,  since  these  will  be  visible  no  matter  their orientation. However, the depth or height of the surface texture  will  not  be  as  clearly  indicated  as  in  a  raking photograph.  There  are  two  basic  setups  for  specular illumination: axial and oblique. (AIC Guide 118)

The light source and the viewer are on the same axis in this technique.  The  camera  film  or  sensor  plane  is  positioned parallel to the subject’s surface, and the lamps are placed adjacent to the camera. Kushel (2017, p.119)

The light source and the viewer are positioned on opposite sides of the subject and at the same angle from the plane of the subject in this technique. Although oblique specular is  by  far  the  most  commonly  used  specular  technique  in visual examination, it is the least commonly photographed. Standing opposite a window to examine the surface of an object lying on a table and kneeling down to examine the surface of a painting exhibited in a museum with overhead lighting are two common examples of the use of oblique specular illumination in everyday practice. Kushel (2017, p.119)

Fiber optics are very effective and safest for the object in axial setups. For illumination of larger areas, two or four light guides at the camera position may be required. Newly developed LED sources may serve the same purpose.

On a copy stand, fiber optic guides can be used directly for axial specular illumination. Alternatively, using a white card with a hole cut out for the camera lens and illuminated by fiber optics can provide a broader axial source (fig. 82A). Avoid shining light into the camera lens. For smaller objects, a thin sheet of glass at a 45 ̊ angle beneath the lens can be used like a beam splitter to direct axial illumination down to the subject from a light source placed on the side (fig. 82B). A thin plastic sheet that is coated to function as a two-way mirror is effective for this technique. For more uniform illumination, a small light box can be used in lieu of a fiber optic source. Using a light box in this way can be particularly effective for photography of daguerreotypes in negative mode. Oblique specular on a copy stand requires either supporting the object on a slanted surface with the light positioned at the side (fig. 83) or placing the camera on a tripod on the opposite side of the light source.

Photofloods are effective in both axial and oblique setups, but incandescent light can pose a greater risk to the object in axial setups due to heat

Softbox enclosures and fluorescent light banks can be effective for both axial and oblique setups, depending on the subject, and they present low risk to the object. In some cases, illumination may be too diffuse to bring out all the desired information. Bringing the surface of the box closer to the subject creates broader and more even coverage of the surface.

A custom or preset white balance should be stored in the camera for the light source, or the same settings as for normal illumination can be used if the light source is the same

Exposure is determined based on the ability to differentiate areas of interest on the subject, not by RGB values from a target, because specular illumination alters the relative brightness of the patches in a target. See also Exposure (insert the link to the page here).

“With transmitted illuminations, the object is lit from the side opposite the viewing position. Light that is able to penetrate the object is recorded. Transmitted illumination is used to show variations in density, thickness, visual opacity, lacunae, ruptures, etc. Common applications include documenting paper structure, watermarks, and repairs, tears, and abrasions in prints and drawings; documenting characteristics of paint application or highlighting small losses, tears, and crack patterns in canvas paintings; and highlighting cracks, ruptures, or losses in freestanding objects. This last application is generally carried out by transilluminating the object with a localized source, such as a fiber optic light. For objects such as glass, for which transmitted light is part of the normal perception of the object, using transmitted light in combination with incident illumination can capture the “normal” appearance” Kushel (2017, p.121) from Section 6.2.4 of The AIC Guide.

On an easel or slant board[edit | edit source]

Retrieved from "https://www.conservation-wiki.com/w/index.php?title=Visible_light_imaging&oldid=55967"
Categories:
This page was last edited on 2 March 2022, at 21:53.
Privacy policy
About Wiki
Disclaimers