Back to Sustainable Practices homepage

Many practices to reduce energy consumption apply to both the home, the workplace (outside the conservation lab and inside it). Below is a list of energy saving tips from the U.S. Small Business Administration article Tips for Energy Efficiency edited for the conservation and collections workspaces in mind.

Resources from the scientific community discuss setting up and running a sustainable scientific laboratory. The type of information covered by these resources includes purchasing choices, resource conservation, and reducing the energy impact of lab spaces.

Below are some tips for sustainable energy use for climate control.

The maintenance of correct environmental conditions can prevent the need for expensive conservation intervention and is a more cost-effective way to manage a collection (Brimblecombe 2005). There has been constant debate as to the need and details of such recommendations, as well as the best way to design a system to meet these recommendations (Levin and Maekawa 2007, Kerscher 1992, Bullock 2009, Rawlins 1942).

It has been accepted that light and high temperatures will speed up degradation processes, and high humidity (above 65% RH) will encourage mold growth. Art collections appear to be less sensitive to temperature levels than humidity levels, and “safe levels” are material dependent (Ayers, et al 1988). High risks begin outside of the range of 25-75% RH (Michalski 1993) and for general collections a more conservative estimate is recommended from 30-60% RH (Erhardt, et al 2007).

Collections are typically controlled by having a set point for temperature (usually 70°F) and humidity (usually 50% RH). It has been widely believed that this set point will then allow some deviation but it will create a safe environment for most collection materials(Erhardt, et al 2007, Anderson and Kestner. 2003). It has been widely discussed for some time how rigid adherence to these two points is neither better for the collection or for energy use. Alternative approaches to environmental control have been suggested using a cost-benefit analysis of RH levels, depending on what is possible from the building envelope and HVAC system and for the collections(Kerscher 1992). Appropriate decisions can be based on the knowledge that every 5°C drop in temperature cuts deterioration rates in half, and low RH is preferable for some collections (Michalski 1993).

For more information, please see the Environmental Guidelines section of this wiki. Also, in 2012, the Image Permanence Institute published a comprehensive look at this topic, called 'IPI’s Guide to Sustainable Preservation Practices for Managing Storage Environments' [3]

Below are some tips for sustainable energy use for office and lab equipment.

Below are some tips for sustainable energy use for lighting.

MR-16 halogen lights, like traditional incandescent lights, create light through heating a tungsten filament. Although they last longer than incandescent lights, about 90% of the energy they emit is through heat, making them not as energy efficient as fluorescent lights or LEDs. Although MR-16 lights are in common use, they may not always be the "museum standard" for illuminating art. They may be best used as accent lighting when an alternative light source is not an option.

Most recently, discussions have centered on rapidly evolving LED light technology. There are many factors to consider for museum LED applications, including the potential for LED light sources to damage light-sensitive artifacts, metrics for comparing LEDs along with other light sources currently used, initial installation costs, and life cycle costs. We are grateful to Steve Weintraub for providing information (Download PDF) on this light source. He also notes there are still reasons to be wary of the technology at this point as more research continues. Jim Druzik, Getty Senior Scientist, in a recent CoOL post, said "We urge any organization currently using or interested in using LEDs to do some basic analysis of each LED product under consideration....In the near future, the Research and Technical Studies group of the American Institute of Conservation will take up just how they may facilitate and provide such a shared environment.” With careful research and planning, however, LEDs can be a safe and attractive lighting option for museum displays. Some museums have already implemented LED lighting for some exhibits, such as the Shelburne Museum's collection of dolls, doll houses, miniature interiors, and samplers.

For more info on LEDs...

CFLs (compact fluorescent lights) are also more energy efficient than tungsten-reliant bulbs. They are being tested and used in the museum environment. Many types of new fluorescent lights (especially T2, T5, and T8, as well as the "wide-spiral" compact fluorescents) offer a high degree of light quality and color correctness (Pfeiffer 2008). Fluorescents emit approximately 70% of their energy as light rather than heat. They also last longer than incandescent or halogen bulbs.

Disposal of CFLs can be a problem because of their mercury content. A typical fluorescent bulb contains approx. 20 mg of mercury, while low-mercury bulbs contain 4 mg or less. Approximately 620 million fluorescent bulbs are discarded yearly. Only about 20% of the discarded bulbs are recycled nationally. Discarded fluorescent bulbs release approximately 2 to 4 tons/year of mercury in the US. Although mercury disposal is a great potential environmental and health hazard, the potential damage from CFL disposal is less than the hazardous amounts of mercury generated by the coal-burning plants required to generate electricity to run the much less efficient tungsten lights, so: less electricity, less mercury.

Daylighting presents problems for energy-conscious design in institutions such as museums. Daylight almost always highlights architectural surfaces instead of the items on display, which in turn leads to an increased electric lighting load to counter-balance this effect (Lull 2008).

Time-based control requires either the use of an automatic timer, or reliance on individuals to turn lights on and off at appropriate times to save energy.

Occupancy-linked controls may rely on motion detectors or a combination of motion detectors and personal controls. This type of lighting control is obviously best suited for areas which are not occupied consistently throughout the work day, but may receive frequent or infrequent visitors. Patricia Silence, Conservator of Museum Exhibitions and Historic Interiors at Colonial Williamsburg, urges the consideration of motion detectors as a means to reduce light exposure for collections as well as to save on energy costs. Her institution tried using motion activated sensors in two galleries where paper and textiles are exhibited. The below image shows a control panel for the lights (left) and the time clock which an electrican hooked up to the light panel (right). Photo credit: Patricia Silence, Colonial Williamsburg Foundation. 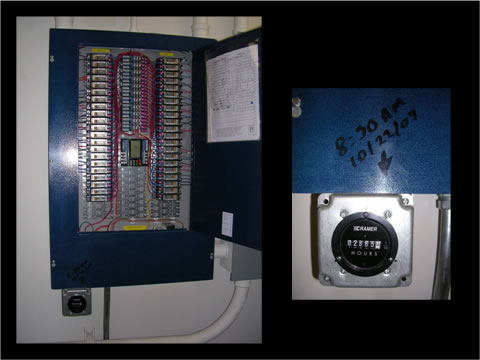 The time clock runs forward whenever the light is on in a particular case; therefore, the clock tracks the real-time hours that the lights are on. This system shows that the gallery is lit only 40% of the time, even with high visitation seven days per week. Patricia Silence identifies a four-way benefit from using this system: (1) energy savings when the lights are off; (2) energy savings when the chillers don't have to work so hard to compensate for the heat load generated by the lights; (3) extension of the life of the collections, which are exposed to radiation only when someone is in the room; (4) the threshold of acceptable light exposure for exhibit items is approached more slowly, which in turn means that exhibit changes are required less frequently, saving materials and labor (Silence 2012). 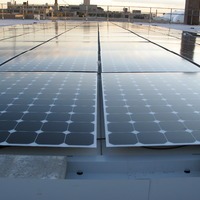 In 2009, MoMA added solar panels to its offsite storage location in Queens, known as MoMA QNS. [8] They are estimated to produce about 65 Mega Watt Hours of electricity each year, about 2% of the electricity bill for the building. It is estimated that it will be paid off in 15 years. In addition to the solar panels, the rest of the roof is painted white. [9] The white roof is part of a NYC program called ‘cool roofs’ which is a study to explore economical ways to reduce the ‘urban heat island effect’. Less heat is reflected and lower temperatures around intake ducts makes it easier to cool the building. The roof has a 30 year guarantee (twice that of a quote for a tar roof by the same company) and is over office spaces with no complaints of leaks.

PhotoArts Imaging Renovation The following email was received from PhotoArts Imaging of Hattiesburg, MS, in response to the CSCP's 2011 survey on sustainability as an example of sustainable practices that would be a good example for others to follow:

When we rebuilt after losing our lab to Katrina, we used all steel construction with 8" depth in the exterior walls. These walls were lined with an R-19 plastic covered insulation on the steel with an R-19 wall insulation on the interior 1/2" sheetrock walls. There is an air space of 3"-4" that creates a pocket between them. The insulation that covers the exterior steel walls extends from foundation to apex of the roof (the building has a peak roof) where the front-to-rear ridge vent creates a draw for the heated air to leave the space.

There are vents in each gable end of the building & one contains a heat & humidity controlled fan that pulls in fresh air to ventilate the attic & storage space. The ceilings over the labs and the mezzanine have R-40 insulation. The 75% of the first floor is covered by the Mezzanine & has an R-16 insulation between them. The interior walls are all insulated with R-16.

The lights are color balanced and low UV output lights. Lights are not on when no one is in the lab/room.

There are filters in the four labs & the kitchen area. These filter out most of the chemicals & other impurities for our water. Some water is double filtered. We have an all-electric lab except the hot water, which are Rennai Commercial On-demand heaters run by propane which is fed by the on-site tank. This also fuels the full building & system generator that can operate the entire facility in case of an emergency power outage (storms). The utilities were all placed underground.

We spend between 10 - 12 cents per square foot per month on the electricity (which is a rural electric power association - higher than most companies). Our HVAC (which is in three zones in the building) keeps each zone at the desired temp & humidity and operates about 40% of the day. During the hottest parts of the summer & coldest parts of the winter, the systems operate about 60% of the day. The temperature in the labs, mezzanine, & main office/digital/conference areas does not range more than 2-3 degrees during a 24 hour period.

The_Shelburne_Museum and LED lights The Shelburne Museum uses LED lighting for its collection of dolls, doll houses, miniature interiors, and samplers. The LEDs have been illuminating the doll cases since 2004, and were chosen primarily because the lights needed to be installed inside the cases. The museum needed a lighting system that gave off little heat and could illuminate the dolls evenly from close range. After extensive research and testing of different lighting methods, Director of Preservation and Conservation Rick Kerschner chose LED bar lights from Prolume. [10]. The first-generation LEDs unfortunately dimmed after three seasons of use, but were replaced under warranty by third-generation LEDs that feature improved technology for a longer life span. Shelburne Museum conservator Nancie Ravenel writes that the new LEDs have been in place for over three years with no loss of intensity. [11] Furthermore, the new LEDs are brighter than needed for illuminating the collections, so they are on dimmer switches. When the LEDs do begin to dim, the switches can be turned up, further extending the life of the bulbs.

Small Corp [15] manufactures frames and display cases, and is completely powered by a photovoltaic solar powered system and composts all of its waste wood locally.