Erosion on the surface of stone works creating a very granulated or “sugary” surface appearance, which can be indicative of a certain brittleness or tendency of the stone to break up or dissolve. Most commonly noted with limestone or marble, as the material breaks up into small crystals that look and feel like coarse sugar. Stones generally have to be replaced when sugaring progresses into crumbling occurs. 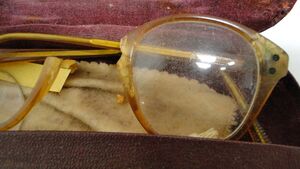 Causes of sugaring include:

No completely satisfactory consolidant for sugaring marble currently exists, according to Sassoni, et.al., however, the use of ammonium phosphate to form hydroxyapatite (HAP) inside marble micro-cracks has recently been proposed by this team. Their study aimed at: (i) investigating different treatment formulations and characterizing the new Ca–P phases; (ii) systematically testing mechanical effectiveness and compatibility with the substrate of the most promising formulations, in comparison with ethyl silicate and ammonium oxalate; (iii) performing a pilot application of the most promising formulation to a real marble artwork affected by sugaring. The results of the study indicate that application of a 3 M DAP solution ( 3 M aqueous solution of diammonium hydrogen phosphate (DAP), followed by limewater poultice application, produces remarkable consolidation of weathered marble, with only slight alterations in pore size distribution and color change, thus providing much better results than both ethyl silicate and ammonium oxalate. Notably, while the above-described treatment conditions caused formation of tricalcium phosphate and octacalcium phosphate in artificially weathered samples, the same conditions caused formation of HAP in the historic artwork, presumably because some gypsum residues were present and calcite grains had high surface roughness. (Sassoni et.al 2014), (Sassoni et.al 2013)

Retrieved from "https://www.conservation-wiki.com/w/index.php?title=Sugaring&oldid=57720"
Categories:
This page was last edited on 2 November 2022, at 15:34.
Privacy policy
About Wiki
Disclaimers