any coating or film on metal caused by oxidation. (AAT 2014) The term is predominately used to describe the reddish, brittle coating that forms on the surface of iron and iron alloys due to the metal's oxidation in the presence of water or moisture. This coating is composed of iron oxide (Fe2O3) and hydrated iron oxide (Fe2O3·nH2O3). Rust is brittle and flaky and only provides some protection to the underlying iron if evenly distributed; if uneven, rust offers no protection. (Logan and Selwyn 2007) 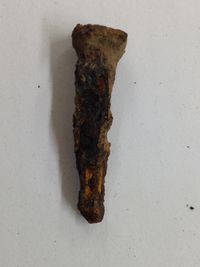 Rust on an iron nail 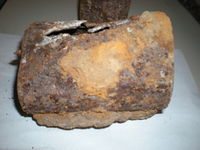 Rust on a tin can

The concept of rust is ancient in origin, appearing in both ancient Greek(ἐρυσίβη) and Roman (Latin: ferrugo, ferruginis) literature to describe the substance coating metal after corrosion. The Greek philosopher Plato, for example, discussed the rust of bronze and iron in the Republic while Pliny the Elder, a first century C.E. Roman author and naturalist, discussed copper-rust, its conservation, and iron rust in the Naturalis Historia. (Scott 2002)

The Getty's Art and Architecture thesaurus uses the term similar to the ancient usage by designating it to oxidized coating or film on any type of metal. (AAT 2014)

The effects of oxidation differ based on the metal involved, thus typically different terms are used to denote the differing effects: rust, tarnish, and patina. (Ankersmit et al. 2013) In this context, rust is used to solely describe the reddish coating produced by the oxidation of iron and iron alloys. (CAMEO 2014)

Retrieved from "https://www.conservation-wiki.com/w/index.php?title=Rust&oldid=53229"
Categories:
This page was last edited on 26 April 2021, at 06:34.
Privacy policy
About Wiki
Disclaimers