The grooved Disk (platter, record) was an invention of Emile Berliner in 1887. Advances over the next 75 years created dozens of sizes (diameters) and colors of Disks, and a variety of rotation speeds (beginning at around 70 rpm) depending on the manufacturer and materials.

Disks are made through one of two processes. In the master and mother process a recording blank is etched to create the matrix for a permanent mold or stamping for pre-recorded Disks. In the instantaneous process a stylus cuts a groove in a blank Disk to capture original recordings. Disks are usually cut laterally (the groove has side to side impressions), though for a time period in the early 20th century they might be cut vertically (so-called "hill-and-dale" impressions), depending on the manufacturer.

In general the three eras of Disk materials found in collecting institutions are • shellac type recordings (1897-c.1948) • instantaneous Disks made either of aluminum or cellulose nitrate on a core (cellulose nitrate Disks are also known as acetates and lacquers) (1930s-1940s) • thermoplastic Disks of polyvinyl chloride or polystyrene (LPs and microgroove Disks) (1948-present)

There are a variety of master recording blank materials as well as unusual Disks developed for specific markets.

A prerecorded Disk made from a matrix. Hardened latex (latex rubber vulcanized with sulfur) also known as vulcanite; easily malformed.

A prerecorded Disk made from a matrix. Cellulose nitrate; brittle.

A Matrix recording on solid wax.

A prerecorded Disk made from a matrix. Constituents may be clay (Byritis), powdered shellac, lampblack, cotton fibers (originally known as Durinoid); formulations change from brand to brand, and other resins, plasticizers, hardeners, and fillers may be added. 7 inch, 10 inch, 12 inch, 16 inch. 70 rpm, 78 rpm, 30 rpm. These are fairly stable as long as they are stored in a cool, dry environment.

Like the shellac Disk but with a core of heavy cardboard.

Either a Matrix or instantaneous recording. Aluminum. 12 inches or smaller.

Either a Matrix or instantaneous recording. Cellulose nitrate lacquer on an aluminum, glass, or zinc core; or cellulose acetate on a core. 10 inch, 12 inch, 13 inch, 16 inch (also unusual sizes larger and smaller)

This is misnamed as an “acetate” Disk; it is usually cellulose nitrate. Also known as a direct cut Disk it could be used either as a matrix or instantaneous Disk. It may have an aluminum, glass, or zinc core. Typical sizes are 10”, 12”, 13”, and 16”. These have a range of problems from shrinking, peeling, cracking, or embrittlement to an exudation of the plasticizer that leaves a sticky residue on the surface. 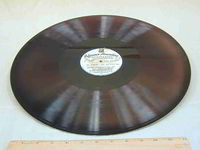 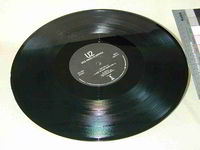 LPs could be produced in “novelty” colors and shapes. LP Jackets or sleeves are often valued for their graphic design.

These are prerecorded Disks. Polystyrene or polyvinyl chloride with stabilizers. 7 inches. 45 rpm

Retrieved from "https://www.conservation-wiki.com/w/index.php?title=Records_or_Disks&oldid=17742"
Categories:
This page was last edited on 20 August 2014, at 15:56.
Privacy policy
About Wiki
Disclaimers