The goal of the Preservation of Color Photographic Materials Chapter is to provide an overview and guide to preservation and conservation concerns unique to traditional color photographic materials. The specificity of color photography stability and treatment is directly related to the image materials, generally composed of organic dyes or pigments and differ greatly from image materials commonly found in monochrome photographs, such as silver, platinum or iron. In addition, primary support materials, commercial surface finishes and coatings will be considered.

Color photographic images can be divided as being made using a subtractive or additive system.

There are various methods to produce a color image. They can be produced by color separation, using filters to expose monochromatic negatives to only a part of the visible spectrum, and later assembling these onto one same support.

These process datasheets are based on summaries compiled by Andrew Robb in September 2000 for the Kent Workshop "Treatment of Contemporary Color Photographs".

SX-70 often has interlayer cracking at corners due to cycling RH. Polaroid claims this will only occur in “extreme” conditions with post-1980 prints. Polacolor I often is mounted to avoid curl due to being on fiber paper.

(Eastman Kodak Dye Transfer, may apply to other products)

May be combined with Carbro (The Camera, September 1937, Harlan Baumbach)

Has a great deal of flexibility, the printer can use this process to create unique images due to the manipulation allowed during development. Typically used by artists / photographers rather than commercial photographers and printers.

During its highest use often used by commercial photographers and printers. 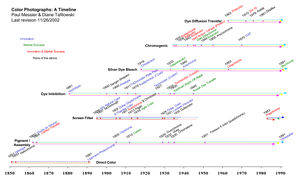 The first color photographs were most likely produced in the early 1850's. The Hillotype and the Heliochrome processes were both direct color, experimental, processes for making colored daguerreotypes. While these processes were among the first to reproduce natural color, their success was limited and, at least in the case of the Hillotype, a matter of considerable dispute. A truly successful, but largely impractical, direct color process color process was ultimately introduced by Gabriel Lippman nearly forty years later in 1891. As the early work in recording natural color was underway, serious research was being devoted to the development of pigment and dye-based processes based on subtractive color mixing. In 1862 Louis Ducos DuHauron achieved a breakthrough success in this vein. DuHauron produced color prints using three monochromatic separation negatives by printing each onto pigmented bichromated gelatin tissues and then superimposing the pigmented gelatin layers onto a paper support. Similar to DuHauron’s process, most subtractive color printing in the 19th and early 20th century were derived from the carbon transfer process developed by Joseph Swan in 1864. Many years later, in 1881, the first dye-based imbibition process was introduced as the Hydrotype. The additive screen filter process became viable in the latter half of the 19th century led by the Joly Natural Color Plate in 1893 and the McDonough plate in 1897.

These early processes laid the groundwork for the great advances in color photography that took place in the early 20th century. One such advance was the Ozobrome or (Raydex) process invented in 1905 by Thomas Manley. This method linked the development of a silver image with a proportionate deposition of pigment in a carbon tissue. The Ozobrome was a forerunner of the Carbro process, one of the most successful of the pigment processes particularly in the professional / commercial sector in the 1930's and 40's. Dufay and Finlay advanced the screen filter process in 1905 through the introduction of their regular patterned, ruled line adaptations. However, the screen filter process was not brought to true commercial success until the advent of the Lumière Autochrome in 1907. Also in 1905, the dye imbibition process was greatly improved and introduced as the Pinatype. Frederick Ives further advanced the dye imbibition process with the introduction of the Trichromatic Plate Pack in 1911. With this process three negatives were be produced in a single exposure through red, green and blue filters (as opposed to previous methods which required three individual, successive exposures). From WWI to the 1920's there was little new development in color photography with the exception of the introduction of the first silver dye bleach process by F.J. Christenson in 1918.

By the 1930’s another great surge of development was underway: the screen filter process made the transition from glass plates to flexible film with Lumière Filmcolor in 1931; a commercially successful silver dye bleach process, Gasparacolor was introduced in 1933; and the dye imbibition process gained significant ground with the introduction of Eastman Wash-Off Relief in 1935.

Without doubt, the most important innovation during these years was Kodachrome, the first integral tripack color reversal film in 1935, quickly followed by Agfacolor in 1936. These first chromogenic materials produced film-based transparencies. Positive prints from color negatives were introduced Kodacolor in 1942 though this product had poor image stability up until a major refinement in 1953. Agfa’s first chromogenic printing material was the Printon initially marketed in 1945. By the1950's Kodachrome was gradually supplanted by Ektachrome, which debuted in 1946. These films had poor dye permanence and from 1946 to 1976 cyan and yellow dye loss was prevalent in E-1, E-2, and E-3 Ektachrome films. By the release of Ektachrome E-4 in 1966 and E-6 in 1977 dye permanence was substantially improved but still problematic for medium or long-term stability. Chromogenic products, marketed by numerous companies, continued to improve and were the dominant color process through the 1970’s, 80’s and 90's.

Kodak developed a highly stable silver dye bleach process called the Azochrome in 1940. Overshadowed by chromogenic products, the marketing of this product was postponed because of WWII. By the end of the war Kodak decided to abandon the process. Also during this time Kodak made slight refinements to the Eastman Wash-Off Relief, more or less renaming to Kodak Dye Transfer in 1945.

The second half of the century saw the emergence of a highly refined silver dye bleach process and the development of an entirely new class of materials known as dye diffusion transfer. Ilford advanced the silver dye bleach process with the introduction of Cibachrome in 1963 (Ilford renamed Cibachrome to Ilfochrome in 1991). This commercially successful silver dye bleach system allowed direct positive prints to be made from 35mm color slides. 1963 also saw the development of the first major dye diffusion transfer process with the introduction of Polacolor, the first “instant” color process.

In 1972, Polaroid released the commercially successful SX-70, an integral, one-step “instant” process. Kodak created it's own version of instant photography in 1976, but Polaroid continued to dominate the market with improvements to Polacolor and SX-70. In 1986, Kodak lost a patent infringement suit brought by Polaroid and, as a result, Kodak was forced to remove its instant films and cameras from the market. In 1983 Polaroid introduced the first 35mm instant slide film, Polachrome, a revival of the screen filter process.

By the end of the 20th century, the viability of most of silver-halide based color processes came under serious threat by the emergence of professional and consumer-level digital cameras and printers. Existing stocks of Dye Transfer materials were heavily depleted and Ilford significantly scaled back its production of Ilfochrome. A center of innovation for decades, Polaroid declared bankruptcy throwing into question the future of its dye diffusion transfer materials. As industrial-scale production of analog color materials wanes, some photographers are adapting traditional methods, especially 3 and 4-color carbon, due to the superior permanence and beauty of the resulting prints.

This bibliography was produced for Conservation Issues in Contemporary Photography: 20th Century Color a collaborative workshop in photograph conservation funded by the Andrew W. Mellon Foundation. Workshop hosted by The Museum of Modern Art, October 20 - 24th, 2008.

Retrieved from "https://www.conservation-wiki.com/w/index.php?title=PMG_Preservation_of_Traditional_Color_Photographic_Materials&oldid=47848"
Categories:
This page was last edited on 30 August 2020, at 20:53.
Privacy policy
About Wiki
Disclaimers