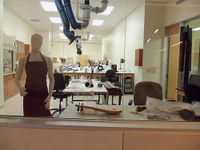 Background to the Museum[edit | edit source]

MIM opened its doors on April 24, 2010. The museum was founded by Robert J. Ulrich, former CEO and chairman emeritus of Target Corporation. (Nilsen 2010). An avid collector of African art and a world museum enthusiast, Ulrich and his friend Marc Felix originated the idea for MIM after a visit to the Musical Instruments Museum in Brussels, Belgium. Their unique vision was to create a museum and collection that afford equal representation to the musical instruments and music of every country in the world. There are other museums of musical instruments across the globe, but the Musical Instrument Museum in Phoenix is unique in that it brings together in one place an expansive collection of instruments from every country. MIM was designed by award‐winning architect Rich Varda, in conjunction with the Minneapolis and Phoenix firm of RSP Architects. MIM’s architecture evokes the topography of the Southwest, and its materials and patterns pay homage to the desert landscape, to the rhythms of musical composition, and to the familiar details common to musical instruments from around the world. Guests are linked to all the galleries through a spacious main corridor, known as “el Rio”. The objects on exhibit in the galleries are nearly all on open display; although some particularly significant objects, as well as some loans, are in vitrines. Guests experience the objects in association with audio/video displays using the Sennheiser guidePORT system in which hidden identifiers are installed at exhibits that cue the audio guides automatically to exactly the right “sound track”. MIM’s collection was assembled by five curators, with consultation from distinguished ethnomusicologists, organologists, and other field experts, under the supervision of MIM president and director Dr. Billie (Bill) R. DeWalt.

History of the Laboratory[edit | edit source]

The first iteration of MIM conservation laboratory was located in part of an office block occupied by Target Financial Services in Chandler, AZ, as the collection grew the second iteration of the laboratory was located in a temporary warehouse space found for the collection in Tempe, AZ, before the museum opened the conservation laboratory was moved for a third time to the purpose built visible laboratory at MIM, Phoenix, AZ. The decision to have a visible laboratory was inspired by the visible paleontology lab at the Carnegie Museum of Natural History in Pittsburgh, MIM’s director Bill DeWalt decided that the Conservation Lab should have a similar large viewing window. Visitors are now invited to “watch as instruments from MIM’s extensive collection are being restored.” (Peters 2012). The laboratory began as a separate department within the museum, and the first Head of Conservation served on the Leadership team. After the museum opened the Conservation Department, along with Curatorial, Registration and Collections, became one of the four departments that made up the ‘Curatorial and Collections Team’ with Manuel Jordán as Chief Curator and Director of Collections as the head of the overall department and serving on the Leadership team. (MIM 2012).

The laboratory is currently supported by Steelcase Inc., and a research fund was established in honor of the conservation lab’s first Head of Conservation; the “Barbara Hamann Conservation Research Fund”. (Peters et al 2010)

MIM’s in-house Multimedia Department has produced two videos in the “Focus on Conservation” series. These both detail treatments of materials associated with Elvis Presley.

Financial donations to support conservation work can be sent to:

Retrieved from "https://www.conservation-wiki.com/w/index.php?title=Musical_Instrument_Museum_Conservation_Lab&oldid=10592"
Category:
This page was last edited on 25 January 2013, at 12:01.
Privacy policy
About Wiki
Disclaimers