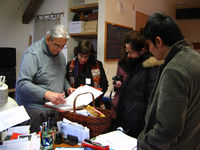 José Orraca in his studio with Fellows of the Advanced Residency Program in Photograph Conservation, February 2006

"Jose Orraca was born in 1938 in Cayay Puerto Rico to a family of prestige and prominence. Jose's father owned swaths of agricultural property and, significantly, movie theaters. Though his love for Puerto Rico never waned, José was compelled to set his own course, leaving the island as a teenager. Jose studied theater, speech, law and religion at Midwestern State University and Baylor University, eventually entering the seminary there and emerging an ordained Baptist minister. Around this time, the Library of Congress had embarked on a course to professionalize its approach to conservation, in part, as a response to the catastrophic Florence flood of 1966. Integral to this effort, esteemed conservators,including Marilyn Kemp Weidner, were hired to reshape the Library's approach to the care of its diverse collections.
Answering a classified ad in 1968, Jose Orraca joined this campaign and was handed the task, among others, of remounting photographs. Interest piqued, Jose immersed himself in historical photographic processes and techniques. Still assigned to the Library, he was sent to the Rochester Institute of Technology in 1971 to conduct independent research into the preservation of photographs.
Concurrently, as part of her conservatorship of Alfred Stieglitz's photographic prints, Georgia O'Keeffe contacted Caroline and Sheldon Keck seeking preservation guidance. The Kecks, in turn, recommended Jose. From 1971 to 1973, O'Keeffe funded Jose's studies through a personal grant. This work culminated in a comprehensive conservation survey of Stieglitz prints within numerous institutional collections.
Breakthroughs in the nascent field of photograph conservation continued in this period. Jose was appointed the first professional conservator of photographs by the George Eastman House in 1972. What emerged as a deep, lifelong, commitment to conservation education began with a temporary position at the Cooperstown conservation program held from 1975 to 1976. From Cooperstown, Jose became an associate professor at the Winterthur/University of Delaware Program in Art Conservation where he designed and implemented the first graduate-level curriculum in photograph conservation.

Partially in response to the growing fine art photography market,Jose moved to New York City where he established a private practice in photograph conservation in 1981, likely the first of its kind anywhere in the world."

José called himself a Conservator of Photographs and Works of Art on Paper. He particularly loved bench conservation and treatment.

"[José] Orraca was a Fellow of the American Institute for Conservation (AIC) and the International Institute for Conservation (IIC).  He served on several AIC committees.  He was awarded the AIC’s Caroline and Sheldon Keck Award in 2000 and honorary membership in the organization in 2009.   He was president of the Louis Pomerantz Institute for the Advancement of the Conservation of Artistic and Historic works from 1988-1989.  He was a co-founder of Apoyo, the Association for the Preservation of the Cultural Patrimony of the Americas.  He was editor of the newsletter Ojo from 1991-1993.  Jose Orraca died on September 14, 2009." (From The Winterthur Library entry)

Location of papers or archives:
The Winterthur Library