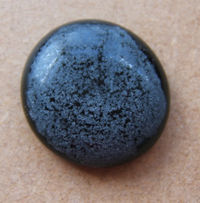 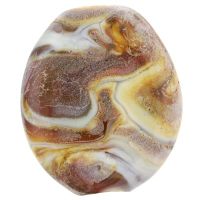 Example of surface devitrification on a bead. Image courtesy of Frantz Art Glass.

Devitrification results in a loss of translucency, and devitrified glass is often described as having a white or grey, “hazy,” “scummy,” “chalky,” or “misty” appearance combined with a roughened surface texture (nicknamed “devit” by glass artists). Devitrification can occur both on the surface of glass or internally, though it is most commonly seen on the surface (Anderson 1998, 21). The crystal formation causes contraction of the glass, and a crinkled surface appearance or cracking can occur as a result (Newton and Davison 1989, 4); this crystallization-induced cracking is separate from deterioration that produces crizzling (from an unstable glass composition or strain cracks) made by poor annealing or thermal shock (made by poor annealing or thermal shock or due to glass weathering. Devitrification is often accidental, but can also be purposefully induced for artistic effect; it cannot be removed by washing the glass.

The composition of the glass affects the crystallization probability. Devitrification may be less common in ancient glass, which typically has complex compositions, than in modern glasses, with simpler compositions (Newton and Davison 1989, 4). Glass that contains boron is more resistant to devitrification (Anderson 1998, 21), while glass with an excess of lime (calcium) cools more slowly, resulting in an increased opportunity for the development of devitrification ("Mystery Slab" 2011). Glass with opalizing agents, opaque glass, and colored glass all are also more likely to devitrify (Walker 2006). These additives create “microcrystalline areas” in the glass where devitrification can more easily occur (Davison 2003, 9).

Retrieved from "https://www.conservation-wiki.com/w/index.php?title=Devitrification&oldid=53196"
Category:
This page was last edited on 26 April 2021, at 06:27.
Privacy policy
About Wiki
Disclaimers