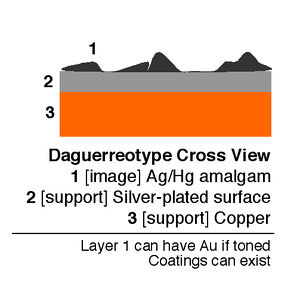 Daguerreotype plate - front and back in normal light, and front in specular light 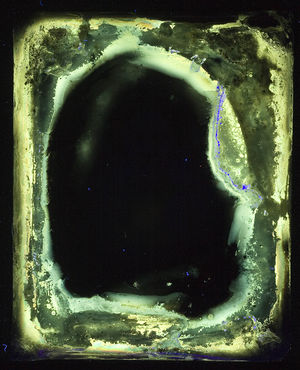 The substrate is a copper plate electroplated with pure silver, polished to smoothness on a series of grinding wheels. Then the plate is sensitized by the vapor of elemental iodine in a sealed box called a fuming box. The plate slides into the fuming box so the photographer is not exposed. Silver iodide is created on the surface of the plate. The plate is placed in a holder and exposed in a large-format camera. The plate is only sensitive to blue/UV light, which breaks the bond between the silver and the iodine. The plate is developed under a piece of amberlith (red printer's screen) creating red light to which the plate is not sensitive, and which enlarges the crystals of free silver, creating the visible image. The less-toxic Becquerel process is used today, eliminating development of the plate using mercury vapor. As such, the surface of the plate is not sensitized with bromines and chlorides. As a result, the Becquerel plates are 10 times slower than traditional plates, making portraits difficult (exposures can be long - more than 5 minutes under strong lights with a fast lens).
Plates must be fixed after development, and can also be gilded. Ungilded plates are very prone to abrasion and image can be easily wiped off. 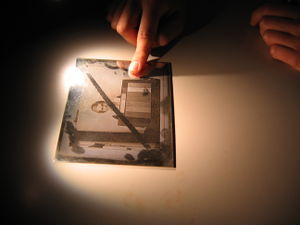 Ungilded modern daguerreotype plate with image wiped off by finger

Because the exposed surface of the plate is also the final image, the result is a reverse image. The surface is susceptible to tarnish, so glass is placed over the image, with a spacer in between, and the edges are sealed.

The image surface of the plate is very susceptible to abrasion and should not be touched. If water emergency occurs, remove from or open case and let air dry. Rinse with clean water if needed.

Retrieved from "https://www.conservation-wiki.com/w/index.php?title=Daguerreotype&oldid=48215"
Categories:
This page was last edited on 15 September 2020, at 21:54.
Privacy policy
About Wiki
Disclaimers