The first sound recording was a foil covered brass cylinder (1877-79, Edison), which came to be known as tinfoil records. These impermanent recordings were eventually replaced with wax or plastic-based cylinders of varying dimensions that could be either pre-recorded or recordable depending on the formulation and manufacture. The height of wax and plastic cylinders' popularity is from about 1887 (Bell-Tainter/American Graphophone Co.) to 1929, when the Edison Company discontinued its commercially recorded cylinder product; however, cylinder recorders were used to a great extent in live recording of ethnographic field notes, and also for office dictation, so archival collections may have cylinders from the 1930s through the early 1960s. 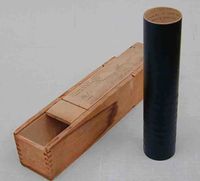 Many manufacturers produced cylinders in its heyday, but the only substantial difference in the recording or playback of different cylinders corresponds to the diameter of the cylinder, which requires a corresponding size armature to hold it. Cylinders were recorded acoustically (also known as mechanical recording). Acoustic recording is defined as sound waves affecting a diaphragm attached to a stylus, which will impress a sound track corresponding to the sound waves onto a recording medium.

Soft Wax Cylinders (1887): Wax cylinders are the first of the cylinders and are usually direct original recordings, though some prerecorded soft wax cylinders exist. In the first few years of their manufacture and use they were an ivory or cream color, but in later years were a medium brown color. 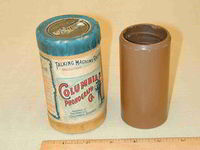 On occasion they were used solely for dictation, and the wax could be scraped off to present a new surface for recording. Wax cylinders are made of various waxes, resins, soaps, and oils with additions of colorants, anti-fungal oils, plasticizers or lubricants, and hardeners. Ward (A Manual of Sound Archives Administration) refers to two recipes (p. 125):

Wax cylinders could be solid, or could have a cardboard core.

Molded Cylinders (1902-03): Prerecorded cylinders became available, made of hardened wax or metallic soap (this also provided a sharper, superior sound), which are fragile and brittle. 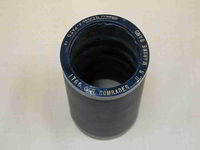 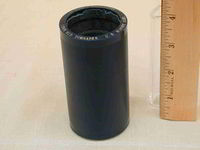 Cellulose nitrate cylinders with cardboard or plaster cores became available after 1908, and culminated in the "Blue Amberol" so-called indestructible cylinder in 1912. 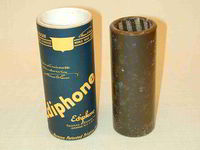 The University of California Santa Barbara Libry has a wax cylinder digitization project.

Cylinders were transferred using a French-made Archeophone, using custom Shure styli from Expert Stylus in England. The audio was converted from analog to digital using a CEDAR ADA and captured at 44.1KHz with a bit depth of 24 bits in Steinberg Wavelab software running on a PC. Files were edited and normalized and then processed with CEDAR's Series X and Series X+ Declicker, Decrackler, Dehisser, and Debuzzer units. After "cleaning," a third file, dithered down to 16 bits, was created. Surrogate files for online distribution were created with Sound Forge 6.0's batch converter (mp3 files) and Cleaner XL (mov files). After 2009, cylinder transfers have been captured simultaneously as raw and processed wav files by splitting the digital signal, routing one channel through the CEDAR components and recombining them and capturing simultaneously on the DAW as two mono wav files.[1]

Retrieved from "https://www.conservation-wiki.com/w/index.php?title=Cylinders&oldid=19788"
Categories:
This page was last edited on 1 December 2014, at 17:19.
Privacy policy
About Wiki
Disclaimers