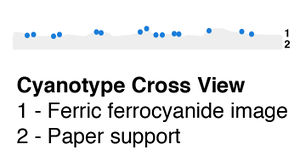 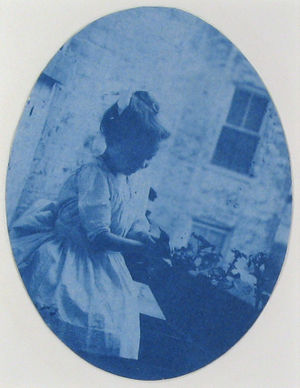 Cyanotypy is a non-silver photographic process based on iron salts. The principle of the process was discovered by Sir John Herschelwho presented it in 1842 to the Royal Photographic Society of London.
Cyanotypy was used in 1843 by photographer Anna Atkins to illustrate the book British Algae: Cyanotype Impressions by Anna Atkins, considered the earliest example of a book illustrated by a purely photographic process[1].
Most of the continuous tone cyanotypes date largely from the period from 1880's to 1920's. They can be found in amateur prints (given the simplicity and non-toxicity of the process) made from 4x5" plates, postcards, studio portraits and as topographical views and novelty subjects.
For many years the cyanotype process was used for technical drawings and illustrations ("blueprints"), and examples can be found illustrating tables and graphs.
Cyanotypes were also extensively used for industrial and technical applications. In 1876 the first commercial "blueprint" paper - Papier Fer Prussiate - was produced, and by the 1880's this type of paper was used for copying engineering and architectural drawings. It remained the preferred industrial reproduction process until the 1950's when it was displaced by diazo and later by electrographic methods.

Composed of iron salts (ferric ferrocyanide or Prussian Blue). It is a one-layer process and therefore has a matte surface, unless coatings have been applied. This, however, is rare.

Commonly blue, but image may be toned, split toned or printed over with gum processes.

Commonly paper. Support fibers should be visible under 30X magnification.

Single layer process. The image, generally blue in tone, is composed of iron salts that are embedded on the support fibers and therefore have a very matte surface.

The support (commonly paper or cloth) is sensitized with a solution of ferric ammonium citrate and potassium ferricyanide and dried in the dark. It is then exposed to ultraviolet light under contact with a negative or an object. The printed support is washed in water where the unreduced ferric salts remain soluble and are washed away, and the resulting image acquires its characteristic cyan-blue tone. The print is blotted and dried. It can be immersed in hydrogen peroxide (H2O2) for more immediate oxidation that creates a deeper image tone. The image contrast may be increased by adding dichromate to the sensitizer. The final print needs the presence of Oxygen (O2) in the air to form the insoluble ferric ferrocyanide (Prussian blue)that creates the image. This is why cyanotypes fade in anoxia, although the image regenerates to an extent when returned to an Oxygen environment.

Mechanical deterioration in cyanotypes should be addressed from the characteristics of the support, given that it is a single layer process.

It is difficult to evaluate fading in a cyanotype image, given that it may have been lightly printed. According to Mike Ware, "[cyanotypes] are faded by visible light, when the Prussian blue (ferric ferrocyanide) is photochemically reduced to Prussian white (ferrous ferrocyanide): but this reaction is found to be substantially reversible, because the latter is slowly reoxidized by molecular oxygen. The importance of allowing cyanotypes access to the air is stressed. The zeolitic nature of the Prussian blue lattice can incorporate impurities which affect its stability to light: oxidizable organic molecules promote fading, but lead toning enhances the stability to light."[2]

Great precaution should be taken when carrying out aqueous treatments. Quoting Mike Ware: "Significant amounts of Prussian blue image can be irreversibly lost from cyanotypes during aqueous washing, which causes perceptible changes within a short time, because the colloidal pigment is peptized and dispersed as a sol. Susceptibility can vary with the type of Prussian blue and water purity. It is concluded that wet treatments of precious specimens should only be undertaken with great circumspection." [3]

As stated by Mike Ware, "Prussian blue is rapidly and irreversibly hydrolyzed to ferrocyanide and hydrated ferric oxide, even at the moderately alkaline pH of 9.4, corresponding to a saturated solution of calcium carbonate, which effectively bleaches the pigment color. This sensitivity to hydrolysis by alkali can be greatly diminished by treatment of the Prussian blue with nickel(II) salts, but may itself entail some image loss and a color shift." [4]' For this reason, it has been advised in the past to use unbuffered enclosures for cyanotypes. However, there are those who defend that unless there is exposure to water damage the buffering of enclosures would not affect cyanotypes negatively, if housed in controlled environments. Enclosure papers without an alkaline buffer is increasingly more difficult, further supporting the latter approach to housing materials for cyanotypes.

Cyanotypes should be kept at similar conditions to other processes (30-45% Relative Humidity; 68F Temperature), with minor fluctuations. Increase in humidity is the major cause of concern due to what was referred previously under "Housing".

"Because the fading of cyanotypes does not obey the photochemical law of reciprocity, they may be safely exhibited under 50 lux illumination without fading"[5]

According to Wagner, McCabe and Lemmen [6], cyanotypes are Very Light Sensitive and should be subjected to a "total exposure per year [of] 5,000 ft-c hours (50,000 lux hours); e.g. 3 ft-c for 5 months at 10 hours per day or 5 ft-c for 3 months at 10 hours per day. Rest for 3 years minimum between display cycles.". Furthermore, if the print is poorly processed or deteriorated, the authors propose the maximum exposure to light should be of 3 months at 3 ft-c and advice is given to consider using a facsimile instead of the original.

Because of what was mentioned above under "Housing", it is common to find that cyanotypes are housed in paper enclosures with an alkaline buffer. In case of water damage, these alkaline components will cause the cyanotype image to fade.

Retrieved from "https://www.conservation-wiki.com/w/index.php?title=Cyanotype&oldid=47902"
Categories:
This page was last edited on 31 August 2020, at 16:45.
Privacy policy
About Wiki
Disclaimers