Magnetic sound recording began with wire (1898), but was not fully developed until the 1940s when magnetic tape was invented. Improvements in recording and playback technology coincided with the rise in the technology to make magnetic tape. The first magnetic tape was perfected in Germany in the 1930s and throughout the WWII years; Allied Forces captured samples of tapes and tape machines at the end of the war and brought them to Britain and United States for development. By the late 1940s Ampex and EMI had developed broadcast quality audio reel to reel.

The Sony Walkman introduced in 1981 (portable cassette player) made the 1980s the decade of the [compact] cassette, though the cassette had been available since the 1960s. 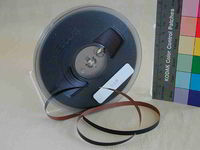 A reel to reel audio recording

1990s – Data Cartridges for storing compressed music files such as MP-3, .wav, or other digitized sound

Formats and Tape Track Configuration: Formats, both analog and digital, can usually be identified by the shape or size of the tape cassette or reel.

In addition to Format configurations (tapes that will only play back on the machine they were built for), there are Tape Track Configurations or Layouts. Unless a written record has been made about how the recording was made, it is difficult to distinguish the different layouts, and it is possible that important sound information can be lost in reformatting. It is essential that the playback head is the same configuration as the track to optimize playback.

Full Track (monaural) = one track, one channel; typically on a ¼" reel to reel tape but can pertain to any width (special purpose ½", 1", 2"). Usually left smoothly wound "tails out" (backwards) in professional applications and environments. Note: an obsolete special purpose full track format used in TV and film applications (for synchronization) superimposed a two track, (push-pull) 60 cycle signal across the entire width of the tape. When played back with a full track head, the 60 cycles is phased out to inaudibility. When played back with a 1/4 or 1/2 track head, the hum will be audible. Another type of synchronization process modulated the 60 cycles within a 14Kz (very high frequency tone) that was mixed in with the audio. This format will "whistle" (if your hearing and equipment are properly functioning) will be audible & has to be filtered out. Preferably with a notch filter.

Half Track, also known as two track monaural = two tracks recorded in opposite directions, one channel each; ¼" reel to reel and monaural cassette

Twin Track, also known as "two-track" or "two track stereo" = two tracks going in the same direction, each track is a channel; typically on a ¼" reel to reel. But can also be used as a half track mono. This also applies to ¼" in broadcast cartridges that outwardly resemble the old 8 track consumer cartridges. If "stereo" (not used as mono half track) these are usually left smoothly wound "tails out" (backwards) in professional applications and environments. Different professional version manufacturers have / had different track widths. Note: There's a special professional two track 1/4" format that contains "CTC": center track time code. It's a third channel containing speed & timing information for synchronization to video tape and film.

Four Track also known as four track quad = four tracks, each going in the same direction, each comprising their own channel: ¼" and ½" reel to reel. These should be these left smoothly wound "tails out" (backwards) as per professional applications and environments.

Stereo cassette (Phillips. aka standard format or compact cassette) = four tracks, the 1st and 2nd track are 'SIDE A' and the 3rd and 4th track comprise 'SIDE B'. The standard speed is 1/78 ips but some recorders optionally recorded and played back at 3.75 for better fidelity. . Note: channel 1 = side A left; channel 2 = side A right; 3=side B left; 4 = side B right. Tape stock is 1/8" wide. In addition to enabling or preventing recording, the tapedeck senses the presence of holes on sides of the cassette's case to properly accommodate the type of tape: "type I", "type II", "type IV"

8-track stereo cartridge = eight tracks, each in its own channel, going in the same direction, making 4 sides; ¼" tape

Materials: Analog and digital tape are composed of a base, binder and pigment. The base can be paper (c. 1946), polyvinylchloride or PVC (1946 – c.1950), cellulose acetate (1946-mid-1950s), or, most commonly polyester (mid-1950s). PVC tapes frequently do not have a binder, but otherwise the binder is polyurethane. The pigment can be, most commonly, ferric oxide. Other pigments include chromium dioxide, metal particle and metal evaporated tape.

Deterioration Characteristics: In all studies of magnetic tape media, the least stable part is the polyurethane binder regardless of whether it is an analog or digital magnetic media recording. The life expectancy of magnetic media is 10-30 years according to studies by the National Media Laboratory and the Council of Library and Information Resources. Also, for analog tape where the base is cellulose acetate, there is a high risk of vinegar syndrome, which is usually associated with photograph negatives. [1]

The A/V Artifact Atlas has a "sound gallery" of audio artifacts encountered during playback and preservation reformatting.

In the case of mold infestation of audio tapes, this advice for treatment was submitted by Lance Watsky to the Association for Recorded Sound (ARCSLIST) email list-serv:

"Do not try to clean moldy tape by multiple fast forward/rewind passes. This does not work well with mold and can damage moldy tape. Tapes with mold can often be suffering from other problems such as binder hydrolysis, binder-base adhesion failure and/or sections of the tape edge that are adhering between wraps due to action of the mold on the tape components where the mold is most active.

Here's some advice, if you want to try and treat the tape yourself:

First, to properly clean off mold, the mold must be driven into dormancy. Attempts to wipe off active mold will often spread the contamination rather than removing it. Dormancy can be achieved by placing the tape in an environment with low humidity for a few weeks. We use an environmental chamber and reduce the RH to below 30%RH.

It is important to always wear protective gear when handling or cleaning tapes with mold. At the very least, you should wear latex gloves, a dust mask and some form of eye protection. Mold can cause health problems that can be severe if someone is sensitive. It is best to remove and clean all clothing worn during the mold removal process or to wear a smock that can be removed. Do not hold or interact closely with small children after heavy mold exposure until you have washed any exposed skin and changed your outer clothes.

To clean off the mold, non-dusting, non-abrasive tissue wipes can be used. The entire surface of the tape, both front and back and head to tail, need to be wiped. This will remove most of the flowering heads but will not remove all. Frequently, chemical treatment is required. You will also want to replace or chemically treat the reel.

Of course, you can try these things yourself or you can send the tape to a facility that does this sort of work and has specialized equipment and technicians trained in the procedures."[1]

Another method of cleaning mold from analog audio tape is to use a piece of Pellon:

"While the tape is running you gently hold a piece of Pellon to the tape to remove the mold. What is more difficult is learning to evaluate the tape to be sure it isn’t too fragile for this treatment, holding the tape with just enough pressure to clean it but not too much to damage it while it is moving through the deck, and watching for splices."[2]

Yet another method of mold remediation is via the use of a HEPA vacuum, described in the article "Recovery of Mold Damaged Magnetic Tape at Vidipax: a Procedure Sheet" published in the Abbey Newsletter.

Retrieved from "https://www.conservation-wiki.com/w/index.php?title=Analog_Audio_Tape&oldid=18471"
Categories:
This page was last edited on 15 September 2014, at 16:50.
Privacy policy
About Wiki
Disclaimers