The use of cloth in bookbinding has a long history. The widespread use of cotton as a covering material for publisher’s bindings, beginning in the 1820s, is how it it is best known. Cloth can also be found in doublures, hinges, endbands, page markers, edge ties, sewing supports, spine linings, and housing enclosures. A variety of fabric types have been used including cotton, linen, canvas, silk, and velvet.

Bookcloth is a general term for all of the fabric goods that are used to cover books. The fabrics are usually woven cotton, which can be bleached, mercerized, dyed, and/or filled with pigment colors, gelatinized, starched, coated, or impregnated with plastics then calendared and embossed. The history of bookcloth, the methods for preparing it and the advantages of one method over another are important to consider whether repairing an old cloth book cover or choosing a book cover for a new cover.

The Textiles Specialty Group is currently updating its page on spot tests for colorfastness which might be worth a look in the future.

One method of preparing book cloth is to finish the cloth with starch sizing. Starch sizing is made by creating a slurry using water, starch, and clay. Pigments are added to the slurry and then it is cooked down to a doughy consistency. The face of the cloth is coated twice with the slurry using knives. The back of the fabric is only coated once with a knife and the slurry. The starch slurry is used to bind the pigments to the yarns and closes the interstices between the yarns. The coated cloth is dried between heated rollers. The dried cloth is then slightly dampened with water and passed through a calendaring process to give the cloth a smooth surface. [2]

Pyroxylin impregnated cloths are similar to starch filled book cloths, and are made in a similar manner. Pyroxylin is made by mixing nitrocellulose with a solvent and a plasticizer. Sometimes stabilizers and catalysts are also employed. The plasticizer is usually oil (one such oil is castor oil) and the solvents are either esters or keytones. One economical advantage of pyroxylin is that it can be diluted with less expensive solvents. Pyroxylin is mixed with pigments and applied in the same manner as the starch to the prepared grey cloth. Pyroxylin cloth is dried in a chamber where the volatile spirits are removed. After drying the cloth is then calendared to create a smooth surface. [3]

Other Uses of Cloth

Pyroxylin-coated or -impregnated book cloths can off-gas and cause damage to sensitive materials (NISO 2001) and (Garside and Knight). For this reason, using pyroxylin bookcloth to make enclosed boxes for photographs or other sensitive materials is not advised and conservators should be cautious about using it as a rebinding material.

For the long term preservation of materials, one should consider the separation of cloth covers, which are pyroxylin or coated with other formulations of cellulose nitrate, from the book block. It is easy to house the cover and contents in separate housings where the cover easily detaches as in albums and scrapbooks with post bindings or cord. Cellulose nitrate coatings deteriorate and the VOCs can penetrate and deteriorate the book block.

Use in Book Manufacture (History and Techniques)

Book cloth is a general term for all of the fabric goods that are used to cover books. The fabrics are usually woven cotton, which can be bleached, mercerized, dyed, and/or filled with pigment colors, gelatinized, starched, coated, or impregnated with plastics then calendared and embossed. The history of book cloth, the methods for preparing it and the advantages of one method over another are important to consider whether repairing an old cloth book cover or choosing a book cover for a new cover.

During the hand press period (generally, 1455 – 1800), books were typically sold in sheets or in plain paper wrappers; printers and booksellers typically had very little to do with paying for, designing or executing the bindings. A book's binding was the responsibility of the book buyer, along with costs of the materials (leather, parchment or paper) for the covering. Technical developments in the printing industry beginning in the early 19th century helped bring down the cost of a book, specifically mechanized production of paper, less expensive materials used in papermaking, and the mechanized printing press.

Costs associated with book bindings also changed. Publisher William Pickering and binder Archibald Leighton were among the first to introduce book cloth as a book covering material. Pickering printed and sold the Diamond Classics in 1821. The Diamond series was a set of octavo-sized cloth bound books, printed with small typefaces that are now recognized as the first publishers’ cloth bound books. Archibald Leighton, while working with William Pickering experimented with new, less expensive materials that would be elegant and durable, eventually developing book cloth as a practical covering material. The manufacture of book cloth began in Germany and England in the early 1820’s and for the rest of that century these countries were the only ones producing and selling book cloth. 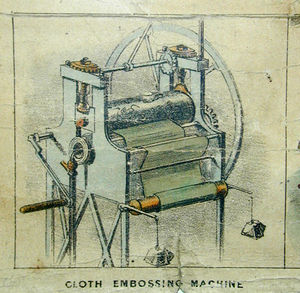 Cloth Embossing Machine, from The Bookbinders Shop (Sketched from the Establishment of Westleys & Clark)

Initially book cloth was not popular with the book buying public. Consumers tended to view book cloth the same as paper covers – a temporary binding that was meant to be replaced. Despite that feeling the cheaper cloth bound books sold well. Thus cloth covered publishers’ bound books became popular, and over time the material proved to be durable. Publishers discovered that they could easily stamp full designs on book cloth, which was cheaper and less expensive than creating a design on a leather cover that had to laboriously be done element by element. Therefore book cloth was easy to decorate and easy to apply to boards, creating distinct book covers cheaply. It quickly became established that book cloth could provide well ornamented bound books at a lesser cost. By 1859, book cloth was widely accepted as a good publishers’ binding (Blaser 1973).

This article explores the different types of reactivating Klucel G for textile linings, the ease and control of the adhesive application, as well as the aesthetic appearance and strength of the repair. The authors included various case studies and tables with tests done with Klucel G to illustrate their discussion. Some of the tables showed tests on the sheen on the surface of the silk crepeline, the ease in which the adhesive could be removed, and the application methods. All the tests concluded that Klucel G was a very successful adhesive to treat heavily deteriorated textiles, though it looses its strength over time. Klucel G has also known to discolour over time, but the adhesive is used in very low concentrations that it is not usually noticeable. The article also showed some developments in the applications of Klucel G, it is a stronger adhesive when reactivated with IMS or acetone as liquids rather than in vapour state, even though more control is achieved through vapour application.

From the publisher: "This volume offers a new edition of Andrea Krupp's groundbreaking article, which first appeared in the Papers of the Bibliographical Society of America, and includes an expanded Catalogue of Bookcloth Grains, with illustrations in a larger format and, for the first time, in color. Sue Allen has written the preface for the book. Ms. Krupp's three-part essay, with several illustrations, covers the introduction of bookcloth and the early decades of its use, discusses bookcloth grain nomenclature and concludes with detailed observations on several cloth grain patterns. The first of three appendices is an information-dense table that lists each grain pattern with date range and frequency and provides cross references to previous nomenclature. Appendices 2 and 3, which together comprise the Catalogue of Nineteenth-Century Bookcloth Grains, include images of the various grains, reproduced at actual size. In this edition, the number of catalogue entries has been expanded from 222 to 248. The swatches are printed in color, and many of the ribbon-embossed patterns in Appendix 3 are formatted to represent the patterns more completely than when first published."

This book provides an excellent introduction to Western book binding styles, and is particularly notable for the wealth of bibliographic references to explore topics in greater depth, the attention paid to the more prosaic bindings of various time periods, and the great color images on the accompanying CD. Many references to the development and decoration of cloth bindings.

Notes that " Pyroxylin-treated cloths have been shown to embrittle and cause discoloration of adjacent material."

Roberts, Matt and Don Etherington. 1982. Bookbinding and the Conservation of Books: A Dictionary of Descriptive Terminology. Washington DC : Library of Congress. Accessed April 15, 2020.

The definition of book cloth includes descriptions of pyroxylin impregnated and starch filled cloths and a history of book cloth manufacture.

Tomlinson, William and Richard Masters. 1996. Bookcloth 1823-1980: A Study of Early Use and the Rise of Manufacture, Winterbottom's Dominance of the Trade in Britain and America, Production Methods and Costs and the Identification of Qualities and Designs. D. Tomlinson : Stockport, Cheshire, England.

Allen, Sue. 1998. American Book Covers, 1830-1900: a Pictorial Guide to the Changes in Design and Technology Found in the Covers of American Books between 1830 and 1900. Library of Congress, Binding & Collections Care Division, Preservation Directorate.

Comparato, Frank. 1971. Books for the Millions: a History of the Men Whose Methods and Machines Packaged the Printed Words. Stackpole Books.

Lehmann-Haupt, Hellmut, Lawrence C. Wroth and Rollo G. Silver Lehmann-Haupt. 1951. The Book in America: a History of the Making and Selling of Books in the United States. R.R. Bowker Company.