Hdrinkwater is the username for Hollie Drinkwater 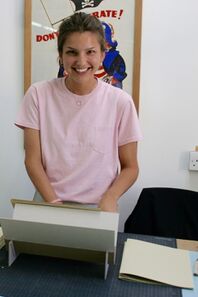 Hollie working at the bench at PZ Conservation C.I.C.

After working at the Fitzwilliam Museum and the McDonald Institute for Archaeological Research in Cambridge, UK, Hollie took up the position of Books Technician in the Books Conservation teaching department at West Dean College of Arts and Conservation. Hollie is also co-founder and permanent team member of the Heritage Conservation Collective based in the UK.

Hollie began her training in Books and Archives Conservation by undertaking an 18-month traineeship at PZ Conservation C.I.C. in the UK. Since completing her traineeship, Hollie has undertaken training placements at the Fitzwilliam Museum in Cambridge, Cambridge University Library, Rita Udina Book Conservation in Barcelona and The National Library of Greece in Athens.

Hollie has a background in History of Art, completing her BA (Hons) degree at the Courtauld Institute of Art in 2015. Hollie then went on to complete her MA in Conservation Studies at West Dean College, where she specialised in the conservation of books and library materials. Hollie's MA thesis focused on the topic of decision making associated with the conservation treatment of genuine Greek-style bindings.

Hollie is available to contact via email at info@heritageconservationcollective.co.uk.