dirt, dust, grease, and particulate matter which has accumulated on the surface of an object. Surface dirt may accumulate from improper handling of objects or through natural settling of particles in the atmosphere. Superficial dirt and grime may also embed into the support of an object, making removal more difficult. (The Fine Arts Conservancy 2006) 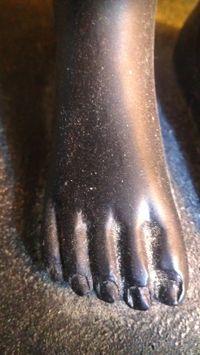 Surface dirt present on the foot of a resin statue

Some in the conservation field make a distinction between surface dirt and surface grime. For these purposes, dirt would be classified as foreign matter made up of organic and inorganic soil-like particulates, while grime would be foreign matter with a greasy and/or oily component. (Museum of Fine Arts, Boston 2013) It is worth noting that dirt seems to be the preferred term as searches in conservation article databases consistently return a greater number of articles using the term dirt versus grime. The Bibliographic Database of the Conservation Information Network database contains 709 records referencing dirt and 188 records using the term grime. The Getty Conservation Institute retrieves 35 records for dirt and 17 for grime. The Getty's Art and Architecture Technical Abstracts (AATA) returns 43 records for dirt and 0 for grime.

The cleaning of dirt, dust, and grime is sometimes performed for aesthetic purposes or to improve viewing of an object. However, cleaning of accumulated surface dirt may also be necessary to prevent pest infestations, as well as corrosion, tarnishing, and premature aging. The Winterthur Museum explains that surface dirt may be prevented or limited through the use of proper storage techniques, filtered heating and air conditioning systems, and regular dusting. (Landrey et al. 2000)

Retrieved from "https://www.conservation-wiki.com/w/index.php?title=Surface_dirt&oldid=53242"
Categories:
This page was last edited on 26 April 2021, at 06:37.
Privacy policy
About Wiki
Disclaimers