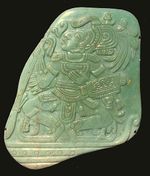 Stone (or rock) is a naturally-occurring solid aggregate of minerals. Stone is an extremely diverse material whose chief characteristics depend on the geological formation and mineral constituents of the source rock. For a general reference on the science of geology, see the Wikipedia entry Geology. 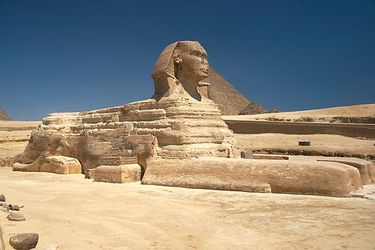 The Great Sphinx of Giza, carved from the surrounding limestone seabed 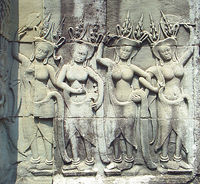 Stone has been used by humans for millions of years as a material for toolmaking, architecture, sculpting and adornment. Some of the world’s oldest artifacts are made of stone. Stone tools were discovered at Olduvai Gorge, Tanzania that are believed to be 1.8 – 2.0 million years old (MacGregor 2010, 9). Examples of stone architecture include the Great Pyramid of Giza, the Parthenon of Athens, and the temple of Angkor Wat in Cambodia. The statue of David by Michelangelo, one of the most famous sculptures in the world, is constructed of marble from the Carrara quarries in Tuscany (Attanasio, Planiata, and Rocchi 2005). Precious rocks and minerals have been used to embellish decorative objects and clothing, from medieval reliquaries to the crown jewels of England.

The principal rock categories that can be used to characterize stone types are sedimentary, igneous, and metamorphic. The rock cycle explains how these classes are geologically inter-related.

Although stone is a diverse material, it does share certain characteristics across rock types: compositionally, an abundance of silicate minerals; grains, which can be interlocked or held together by a mineral matrix; and, sometimes, contaminants like salts and clays. The geological conditions under which a rock is formed shapes the physical and chemical properties of stone, including its color(s), hardness, porosity, grain size, shape and sorting, cementation, mineral types present, and solubility. Gemstones are specific minerals that occur in association with other rocks.

The following types of sedimentary rocks are typically encountered by objects conservators: alabaster, limestone, and sandstone.

Sedimentary rocks form from the physical and chemical weathering of existing rocks, which break down into sediment. Deposition of sediment can produce clastic (cemented together) or chemical (precipitated) sedimentary rocks. Mineral compositions vary, as do grain size and shape, depending on the energy and distance of sediment transport. Grains and cementing material can be readily distinguished in thin- or cross-section. Some sedimentary rocks can contain fossils. Sedimentary rocks tend to be less strong and more porous than igneous and metamorphic rock (Wolbers 2010, Marshak G-3,4). 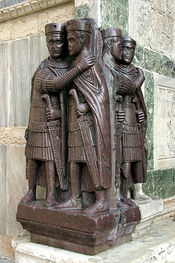 Formation processes that are typical for this type of rock include slow or rapid cooling and crystallization of magma above (extrusive) or below (intrusive) the earth’s surface. Mineral compositions vary, but igneous rocks can contain mixtures of grains of varying shape and size, from large phenocysts to fine grains. Igneous rocks tend to be stronger, harder, and less porous than sedimentary rocks (Wolbers 2010, Marshak G-11). 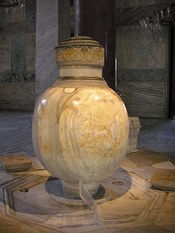 Formation occurs as igneous and/or sedimentary rocks are transformed by high pressure and temperature inside the earth’s crust. Mineral compositions reflect those found in igneous or sedimentary rock, but the way these minerals are assembled are altered during the formation process. Metamorphic rocks tend to be stronger than sedimentary rocks, but can still be relatively soft – for example marble formed by metamorphosed limestone tends to be soft and sensitive to low pH solutions (Wolbers 2010, Marshak G-13).

Various tools and techniques have been used to work stone to its desired shape and degree of detail and finish. Techniques for stone extraction include quarrying. Stone can be shaped (cut, hewn, carved, drilled, etc.) by tools such as point, claw, and flat chisels in conjunction with hammer and mallets. Structural elements in buildings are sculpture are brought together by joining, which can involve the use of pins, mortars, and adhesives. Surface finishing techniques include grinding and polishing using rasps and files, and various abrasives (Beecroft 1976). Like wood, bone, ivory and shell, stone is often used for decorative inlay. Gemstones can be affixed or mounted to other objects. Polychromy and gilding have been used to embellish architectural, sculptural, and decorative stone surfaces (Verri, Opper, and Deviese 2010).

See The Art of Making in Antiquity - Stoneworking in the Roman World website for information on ancient stoneworking technology. 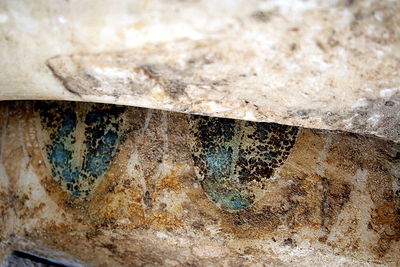 Traces of polychromy on an ancient Greek column capital

Testing and measurement techniques, microscopic examination, laboratory testing and instrumental analysis have been used to characterize the physical and chemical properties of stone objects and structures, identify factors in their deterioration, and direct preventive and interventive conservation decisions. 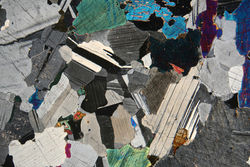 Photomicrograph of a thin section of Gabbro

The following techniques have been used to assess stone characteristics, sources and rates of decay: visual and microscopic examination, including stone cross-section and thin-section examination, as well as backscattered electron imaging with SEM-EDS. Laboratory testing and measurement of stone and treatment materials has been used to quantify inherent properties like hardness and porosity, and to assess the properties of contaminants and treatment materials through salt cycling and consolidant penetration tests. Instrumental analytical techniques for the characterization of mineral content include x-ray diffraction, scanning electron microscopy with energy-dispersive spectroscopy, neutron activation analysis, and Raman spectroscopy. Infrared spectroscopy, x-ray diffraction, and ion chromatography have been employed in the characterization of salts. 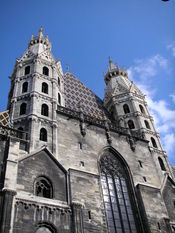 Guidelines for the photographic documentation of stone and other three-dimensional objects can be found on the AIC Guidelines for Practice.

Three-dimensional documentation and imaging of stone has been performed using Reflectance Transformation Imaging (RTI), as well as various methods of laser scanning (Beaubien, Karas, and Fitzhugh 2007). Monitoring of deterioration of stone surfaces over time include time-lapse imaging and videography (Pinchin et al. 2008). Profileometry is a technique employed to measure surface characteristics like roughness; ultrasonic measurement and transducers have been used to quantify changes in stone structures and surfaces.

A number of protective measures have been taken to protect stone installed in musuems, such as glass or plexiglass barriers for carved reliefs or architectural elements. Environmental controls have been implemented in display environments has been used to protect salt-laden stone objects from potential salt cycling damage (Nunberg, Heywood, and Wheeler 1996). Stone sculpture in outdoor environments has been protected by seasonal covers such as wrapping and tents (Berry et al. 2005). Protective coatings, both permanent and sacrificial, have been used to protect outdoor stone from vandalism. Site preservation and management have also been used to protect architectural remains and other immoveable stone material at archaeological and historic sites.

Cleaning techniques vary from simple mechanical procedures like dusting and loose dirt removal to scalpel removal of burial accretions. Solvent and aqueous cleaning are also used, often in conjunction with a poultice or gel carrier.

Solvents can be useful in removing certain types of surface dirt and grime, especially sooty or greasy types. Aqueous cleaning is also used, with surfactants or detergents, or with added compounds to control pH levels. Some stones – like alabaster – can be easily abraded during cleaning, and are particularly sensitive to aqueous cleaning agents.

Poultices are used for cleaning, stain reduction, and desalination. Materials for poulticing include carriers like paper pulp and other cellulosics, clays, gels and latex, cleaning agents like ion exchange resins, chelators and release agents like sand and other aggregates. A number of agents are used for the reduction of stains in stone, including aqueous agents, chelators, oxidizing and reducing agents. These agents can are often delivered in a poultice to control the direction of stain migration.

Laser ablation has also been used to clean stone surfaces, and has proven to be very effective in the removal of black crusts often seen on calcareous stones cleaning mechanism and safety precautions (Cooper 2005). Bioremoval of these crusts has also been studied (Toniolo et al. 2008).

Consolidation materials for stone include synthetic polymers like B-72, which can be delivered with solvent, polymerized in situ (Išik-Yürüksoy and Güven 1997), or combined with other consolidants (Brus and Kotlik 1996). Silane treatments have been widely used in the stabilization of building stones (Wheeler 2005), as have tartrate and oxalate treatments (Doherty et al. 2007). Inorganic consolidants have also been introduced, including calcium hydroxide nanoparticles for carbonate stones (Hansen et al. 2003).

Desalination is an important stabilization method for salt-laden stones. Soluble salts can be removed by immersing the stone in water, or by means of a poultice. Poultice properties, including porosity, thickness, and drying rate can be adjusted to improve the rate of desalination. 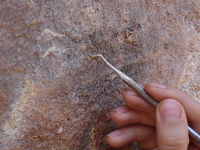 Stone delamination and cracks can be stabilized using bulked adhesives and fill materials like acrylic emulsions, grouts and mortars. Large structural cracks and breaks are often joined with the help of pins, as well as adhesives. The reversal of previous repairs can involve the removal of corroded metal pins, or the reinforcement of old joins or failed adhesives.

Aesthetic reintegration can consist of carved stone joined or adhered to original material. Fills can be carried out using mortars, grouts, or bulked adhesives like Paraloid B-72 (Wolfe 2009). Mold-taking, casting, retouching and inpainting materials vary.

Protective coatings and water repellents have been employed to protect stone from the damages of handling, graffiti, water flow and infiltration, and other factors that can lead to deterioration of stone surfaces.

Buildings, architectural remains, mosaics, and composite objects can contain elements of stone that require their own unique conservation approaches. 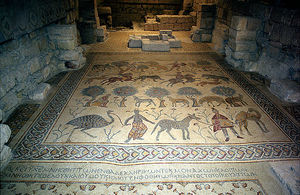 Arnold, A., and A. Kueng. 1985. Crystallization and habits of salt efflorescences on walls 1: methods of investigation and habits. 5th international congress on the deterioration and conservation of stone. Lausanne, Switzerland: Presses polytechniques romandes. 255 – 267.

Rodriguez-Navarro, C., E. Hansen, E. Sebastian, and W.S. Ginnell. 1997. The role of clays in the decay of ancient Egyptian limestone sculptures. Journal of the American Institute for Conservation 36(2): 151–163.

Retrieved from "https://www.conservation-wiki.com/w/index.php?title=Stone&oldid=27322"
Categories:
This page was last edited on 29 November 2016, at 20:43.
Privacy policy
About Wiki
Disclaimers