Skinning is an abrasion of original surface material (e.g. paint or paper) by inexpert cleansing. 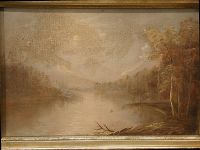 Skinning often emphasizes the weave of the canvas, since paint is removed from the raised portions of the painting's surface.[1] Skinning can also be extended to works on paper,in which a layer of the paper surface has been removed. [2] An example of skinning occuring to a paper object could be when sticky tape is pulled off the surface in an effort to restore the object to its original state.[3] --TFann (talk) 21:43, 26 October 2015 (CDT)