Silver mirroring is a natural chemical process that affects photographic materials containing silver over time (Chen 2001). It results in a metallic sheen over the surface of the photograph, typically affecting the darker areas of a photograph most (Gawain Weaver 2011). 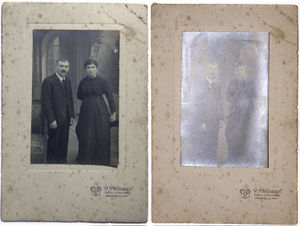 Retrieved from "https://www.conservation-wiki.com/w/index.php?title=Silver_mirroring&oldid=53233"
Categories:
This page was last edited on 26 April 2021, at 06:36.
Privacy policy
About Wiki
Disclaimers