"Detachment of stone as a scale or a stack of scales, not following any stone structure and detaching like fish scales or parallel to the stone surface. The thickness of a scale is generally of millimetric to centimetric scale, and is negligeable compared to its surface dimension." [1] May also occur as a form of weathering, primarily on rocks or rocky surfaces that reside in a salt ladened environment. 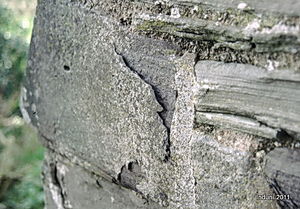 Example of contour scaling on stone

Appears to primarily be an issue within sandstone which easily erodes. Is also affected by the conditions of the weathering process and from the salinity of the air.

Retrieved from "https://www.conservation-wiki.com/w/index.php?title=Scaling&oldid=53230"
Categories:
This page was last edited on 26 April 2021, at 06:36.
Privacy policy
About Wiki
Disclaimers