shallow and often irregular pin-sized losses scattered over an object's surface. Pitting may occur when corrosive elements or remains from a casting process accumulate on a surface, react to the material over time, and dissolve layers which produce small pits.[1] 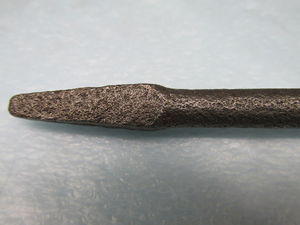 Severe 'pitting' on an auger tang 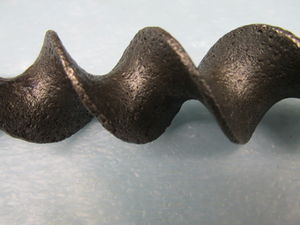 Continued 'pitting' on the helix pattern

Pitting is the result of a microclimate forming on a surface which can contain corrosive elements - water, oxygen, carbonate ions, chloride ions, etc. Elements chemically interact with the surface to create an alkaline-like layer that dissolves ions from the surface effectively forming a corrosive product - pits. For example, when a copper interacts with water containing dissolved oxygen, soluble copper corrosion products can potentially convert to insoluble basic salts. In the form of a visible film, this layer of cuprous oxide can become thick, cathodic, and favorable to pitting.[2]

Pitting is most commonly found on metals, iron, steel, bronze, ceramics and stoneware, and commercial copper products like pipes and boilers. Within cultural institutions, you can typically see pitting on cast iron cookware, military cannons, bayonets, and pistols, as well as maritime artifacts.

The term ‘pitting’ may also be used to describe natural history artifacts. For example, a Tortoise shell can have ‘pitting’. However, these pits are most likely produced by an insect or outdoor element – different method, but it still produces the same descriptive imagery.

Similarly, ceramic artifacts can have ‘pitting’ as a result of the outer glaze either reacting during the firing process or due to corrosion. Again, different method but similar descriptive imagery.

When recognizing pitting or proposing treatment, always look for evidence of active rust or corrosion. Handling pitted objects requires gloves (cotton or nitrile) as to not deposit any oils on the surface or cause any abrasion. As for treatment, general surface cleaning and storage and exhibition monitoring are appropriate.

Little, M. (2000). Metals. The Winterthur Guide to Caring for you Collection (pp.91-102). Hanover and London: University Press of New England.