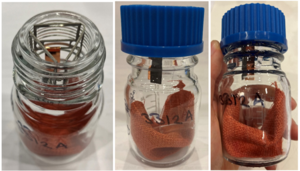 Left: a coupon holder placed in the neck of a sample jar. Center and Right: A sealed sample jar with hanger, coupons, test material, water and vial.

The Oddy Test is used as a subjective method for determining whether or not a material, such as wood, fabric, or paint, is appropriate for use in an enclosed space with artwork or other cultural heritage artifacts. In essence, it is a low-cost, non-specific accelerated aging test used to detect potentially hazardous gases emitted in a closed, elevated humidity, and temperature environment (1973 Oddy, 2003 Bamberger). To conduct the test, a material sample is enclosed in a sealed container with three suspended metal coupons, silver, copper, and lead, and a small amount of water in an open vial. Typically the sealed container is then held at 60 degrees Celsius for 28 days to maintain a high relative humidity of ~95 to 100%. An identical container with three metal coupons but no test material acts as a control. After 28 days, the metal coupons are assessed for changes that may indicate their exposure to various compounds; the silver can detect reduced sulfur compounds, the lead can detect organic acids, aldehydes, and acidic gases, and the copper can detect chlorides, oxides, and sulfur compounds (2006 Gryzywacz 113-114).

The test is popular for its use of commonly available low-cost equipment and supplies. It is used by small and large cultural heritage organizations as well as by conservators in private practice and commercial manufacturers. The results have been used around the world to evaluate the suitability of particular materials for use in the storage and display of cultural heritage artifacts. However, it is also widely understood that Oddy Test results are subjective. It has further been shown that achieving standardization between testers and amongst different labs is quite difficult (1993 Green and Thickett). 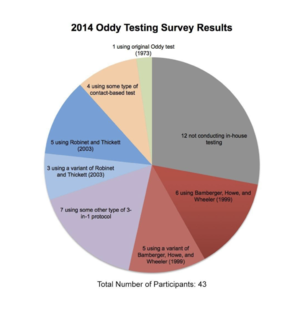 In the early 1970s Andrew Oddy, a conservation scientist at the British Museum, experimented with a reactivity test in the hopes of evaluating materials for their safety in and around metal objects. He was aware that while the materials might be structurally safe, they could emit chemicals over time that were harmful to the objects stored near them. For example, it had been well documented that acids and formaldehyde released from the oak of wooden cabinets had damaged shell objects stored within them (1899 Byne). After his initial paper in 1973 describing the procedure involving three metal coupons each individually exposed to the material to be evaluated, the test was coined the Oddy Test. Over time, due to a lack of alternatives, the test was used to test a wide variety of materials and the results were applied not only to understand what materials are appropriate for metal artifacts but extended to inform collection stewards about all artist materials, from feathers and plastics to paper and stone.

The test has been modified, evaluated, and refined over the years by Andrew Oddy as well as others, such as Robinett and Thickett at the British Museum (2003), Bamberger, Wheeler, and Howe at the Metropolitan Museum of Art (1999), Smith at the Indianapolis Museum of Art (2018), Stephens, Buscarino, and Breitung at the Metropolitan Museum of Art (2018), and Korenberg, Keable, Phippard, and Doyle at the British Museum (2017), resulting in multiple variants of the testing protocol (see bibliography below). Though these refinements sometimes improved the reliability of the results, many have observed that achieving consistent and reproducible results can still be challenging.

A 1993 study by Green and Thickett showed that procedural variations between labs made it difficult to compare results. In 2014 a survey of 43 conservators by Elena Torok and Joelle Wickens found that at least 20 different Oddy testing procedures were in use in the US at the time (2014 Torok and Wickens). In subsequent work with Samantha Owens, they conducted parallel tests of sample materials according to six selected protocols. Their testing confirmed Green and Thickett’s 1993 study, showing that without extreme care and consistency it is difficult to replicate results.

Despite these drawbacks, the Oddy Test remains a primary tool for conservators assessing the suitability of materials for exhibition and storage of cultural heritage objects due to its relatively low cost and simple technology. For this reason, in 2018, the Materials Testing & Standards Committee of the AIC Materials Selection and Specification Working Group (MWG) began working to assess the most prominent protocols for their reproducibility between institutions with the goal of highlighting and promoting the use of the most consistent and reliable protocols.

Three protocols are being examined and refined by the Materials Working Group:

If you are looking for materials, such as fabrics, adhesives, paints, and boards, that have been tested to determine if they are safe to use in storage, transit, or exhibition cases with cultural heritage artifacts, you are in the right place. Results from Oddy tests and other methods are currently being shared by numerous testers from the US and around the world on the Oddy Test Results Tables.

There are currently five tables:

We invite you to be a part of the action and contribute your results too. Find out more about how to do so on the Tables page here.

What follows is a chronological bibliography of information about the Oddy Test, its history, variants, improvements, updates, alternatives, modifications, comparisons to analytical methods, studies, and assessments. Articles that reference the use of the Oddy Test will not be found here. Please contact the page moderator if you find a missing reference.

Retrieved from "https://www.conservation-wiki.com/w/index.php?title=Oddy_Test&oldid=49013"
Categories:
This page was last edited on 29 October 2020, at 14:09.
Privacy policy
About Wiki
Disclaimers