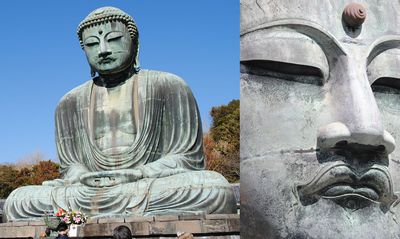 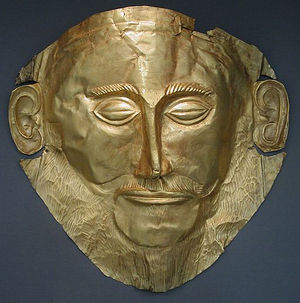 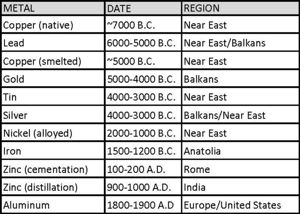 Table 1. First widespread use of metals (adapted from Selwyn 2004).

Metals have been used for tools, weapons, jewellery, money, sculpture, and architecture. The use of metals started more 8,000 years ago and is one of the major technological developments in human history.

Developments in metallurgy are often used to classify historical time periods, for example:

The type of metal or metal alloys and the construction of an object can often be used to determine the date and place of manufacture. Important metals and their approximate date of first use are listed in Table 1.

Metal ores are minerals that can be converted to metal through smelting or other refining processes. Most ores are oxides or sulphides of a particular metal or combination of metals. Often more than one metal can be refined from a particular metal ore. A list of common metals and some of their ores are in Table 2.

Metals are a crystalline material. Atoms arrange in a regular repeating lattice structure and this structure is a crystal. As a metal cools and goes from a liquid phase to a solid phase, crystals form into 'grains'. Most metal consist of many grains bound together. Classifications of these crystalline lattice structures include face-centered cubic and body-centered cubic. The working properties of a metal greatly depend on which structure the atoms fall into and how the metal grains fit together. 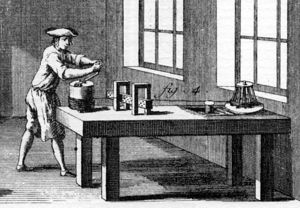 Drawing wire relies on the ductility of the metal. (From Diderot's "Forges") 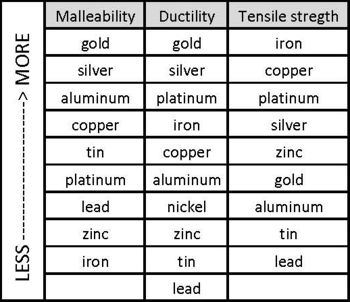 Metals are often describe as a noble or a base metal. Noble metals are less reactive than base metals. The degree of nobility is often referenced in a relative scale referred to variously as an electromotive, electrochemical, or galvanic series. Individual metals and their alloys can be ranked in order of their nobility by measuring their electric potential with a reference electrode in standard conditions. Below is the ranking of some common metals:
MORE NOBLE...Gold> Platinum> Silver> Mercury> Copper> Lead> Tin> Iron> Zinc> Aluminum...LESS NOBLE 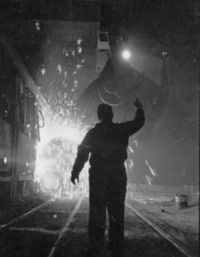 'Steel worker in mill as molten steel spills from vat, in Chicago, Illinois' by Stanley Kubrick, 1949, (Photo courtesy of Library of Congress)

Smelting is the process of refining metal ore into metal using heat. Extensive research on the history and development of smelting technology has been done in archaeometry and archaeometallurgy fields (see Tylecote 1976, Craddock 1995). 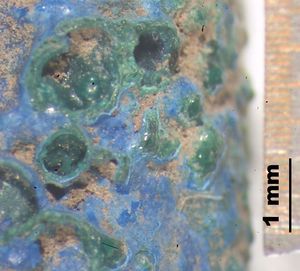 Detail of copper corrosion on an ancient Chinese bronze containing azurite and malachite. Although a form of deterioration of the metal, the corrosion product is highly prized by collectors as an indication of age and authenticity.(Photo by Chris Watters)

Corrosion is the most common form of deterioration associated with metals and is caused by environmental factors or contact with corrosive substances. Environmental factors include exposure to moisture and air pollution. Salts, acids, and alkalis are all corrosive substances depending on the metal (Thomson 1978). Depending on the material and conditions, effects of corrosion can range from a minor change in color to a complete loss of metal. It is important to note that corrosion is not considered deterioration when it forms a 'patina' on the object.

Other types of deterioration include physical damage and inherent vice. Physical damage can be can caused by abrasion, impact, or load stress and may result in loss of surface, breaks, bends, scratches, dents, or cracks. Examples of inherent vice that can facilitate deterioration include improper alloying, working flaws, and composite objects made of incompatible materials.

When two dissimilar metals are in direct contact in the presence of an electrolyte, one metal will preferentially corrode in a electrochemical process called galvanic corrosion. The more noble metal will act as the cathode accepting electrons and corroding the less noble metal.

Guidelines for the photographic documentation of metal and other three-dimensional objects can be found on the AIC Guidelines for Practice.

The documentation and preservation of microstructure is an important consideration in metals conservation. The microstructure can hold evidence of an objects working history that can be lost if heat or mechanical treatments are employed. Metallographic techniques can document the grain structure. (Scott 1991)

With the exception of the noble metals (gold, platinum, rhodium, etc.), most metals readily undergo oxidation in an uncontrolled environment. Efforts in preventive conservation of metals typically focus on reducing the rate of oxidation. While many aspects of standard professional preventive care apply to metal objects, it is often necessary to apply more rigorous handling and environmental standards to metal objects.

GLOVES SHOULD ALWAYS BE WORN WHEN HANDLING METAL OBJECTS because metals, especially highly polished metals, are very reactive to the oils and salts of human skin. While there are some exception to this statement, the widespread damage of objects by etched fingerprints should urge professionals to err on the side of caution. Most uncoated metals are particularly susceptible to damage when handled with bare hands.

Cleaning is an irreversible treatment and must be carefully considered. Although metal objects often appear more robust than other materials, cleaning treatments can significantly alter the appearance and condition of the object. A metals conservator may clean metals in order to enhance an object's appearance, prevent further deterioration, or to maximize treatment effectiveness. Metal objects often have deliberate surface treatments that can be damaged by cleaning.

Mechanical cleaning commonly includes the use of cutting tools like scalpels, chisels, and drills often with magnification and also includes the use of abrasive cleaning such as sanding, polishing, or mediablasting techniques. Damage by mechanical cleaning occurs when tools or abrasives are used too aggressively and contacts the underlying metal surface, usually resulting in the loss of original material. Softer metals such as gold, silver, and lead are particularly susceptible to mechanical damage, but all metals can be damaged in this manner.

A galvanic wrap is a process of electrochemical cleaning that can be used for small metal artifacts after documentation, examination, and basic cleaning Hamilton, 2000. This technique relies on the interaction between metals with different properties of nobility. ìSome metals known as base metals are much more likely to corrode than the noble metals of gold and silver.Where two metals are in contact, a particular type of corrosion occurs so that the more base metal corrodes faster than usual whilst the more noble corrodes more slowly the more noble metal is protected from attackî Cronyn, 1990:171. For galvanic wraps, the evolution of hydrogen bubbles emerging from the surface of the artifact results in an electrochemical reduction of the objectís corrosion and removes chlorides Hamilton, 2000.

Galvanic wraps may be used as a low cost electrochemical cleaning method that requires little equipment. The process involves tightly wrapping the artifact with a metal of lower nobility (such as aluminum foil), and then placing it in an electrolyte solution, such as a sodium carbonate or sodium bicarbonate solution Pearson, 1987. There is no time limit to the treatment (prolonged submersion in the solution will not in itself damage the artifact); however, the aluminum foil acting as cathode will eventually completely oxidize Hamilton, 2000. The artifact may require several repetitions of this process to fully remove corrosion products.

This treatment has some significant disadvantages. There is some potential that the artifact could be damaged in treatment, as the stripping of corrosion products can remove delicate surface evidence, and in some cases, corrosion pits can form Cronyn, 1990. This treatment is also a very slow extraction process, and as the surface of the artifact is covered by the anodic wrap, it is difficult to monitor chloride extraction and corrosion reduction Hamilton, 2000. To speed up the process, heating is sometimes advised, but this requires a fume hood to protect the conservator from caustic gases, as well as constant supervision of the artifact Hamilton, 2000. This is impractical for a long treatment plan, and lessens the benefit of the treatment requiring minimal equipment. Thus, although galvanic wrapping can serve as a low-cost, basic technique to electrochemically clean small metal artifacts, one should also be advised it could be complicated by large artifacts, the need for a faster treatment time, or heavy concretions. As noted by the Texas A&M Nautical Archaeology Program Conservation Research Laboratory, "Those amateurs who have been told that it is a simple method that can readily be performed on the kitchen stove are advised to forget it" Hume, 1969:276.

====Other treatments====
If appropriate: This section heading should be used if the treatment being discussed does not fit into any of the other heading categories.

The history of metals:
Tyelcote, R.F. 1976 A History of Metallurgy. London, UK: The Metals Society

Retrieved from "https://www.conservation-wiki.com/w/index.php?title=Metals&oldid=23967"
Categories:
This page was last edited on 6 November 2015, at 18:57.
Privacy policy
About Wiki
Disclaimers