What it measures: Liquid Chromatography separates molecules by organic functional group or solubility, then the Mass Spectrometer identifies the different molecules by amount and mass. This method is primarily used for organic compounds (Price and Burton 2011, 109, 113).

Phases it can examine: Liquid or solid (dependent on the solubility in the solvent for the sample injector)

Qualitative or quantitative: Both

Used in conservation: to identify unknown organic residues, given the high selectivity and sensitivity of the combined analytical techniques. Many studies rely on biomarker identification, which compares ancient organic residues to known biological compounds found in comparable products today (Pollard et al 2007, 148). The wine markers discussed in the Guasch-Jane case study below illustrate this principle.

Guasch-Jane, et al. applied this method of analysis to identification of trace tartaric acid and syringic acid (wine markers) in ancient Egyptian vessels. Tartaric acid was chosen as a marker for ancient wine because it is rare in nature, except when found in grapes, and it is readily absorbed by the silicates in pottery through hydrogen bonding, allowing it to last longer than other trace elements (Guasch-Jane et al 2004, 1672). Malvidin-3-glucoside is a chemical found primarily in young red wines. When subjected to alkaline fusion, this residue will degrade, producing syringic acid, which can then be identified used LC-MS instrumentation (Guasch-Jane et al 2004, 1676).

The research team used LC-MS-MS to gain the needed selectivity and sensitivity for the acid types they expected to find (Guasch-Jane et al 2004, 1672). The samples used were residues off five pieces of Egyptian pottery from the British Museum in London and the Egyptian Museum in Cairo. They were gathered by scraping the inside of the pots for visible residue in the first three cases, and for assumed non-visible residue in the last two. The samples (2mg) were extracted using 0.1% formic acid in water: methanol, (80:20, v/v), then concentrated under nitrogen. The first sample, due to its larger quantity, also went alkaline fusion using potassium hydroxide, and extracting with ethyl acetate. Data for these samples was then acquired using a liquid chromatograph with a mass spectrometer in tandem (LC-MS-MS). The instrument was run at either single ion monitoring mode, or multiple reaction monitoring mode depending on the relative size of the sample (Guasch-Jane et al 2004, 1673-1674).

The presence of tartaric acid was confirmed in only one of the five samples tested using the LC-MS-MS full scan mode (See Figure 1). This sample was then tested for another pigment marker, malvidin-3, to see if the grapes that made the wine in question were red, which was confirmed. Alkaline fusion was carried out on the sample: the process causes a release of syringic acid, indicating the presence of the other marker (See Figure 2). By examining the MS-MS scans, three other samples showed the presence of tartaric acid (See Figure 3) (Guasch-Jane et al 2004, 1675).

This technique shows the use of LC-MS-MS to identify wine marker residues on ancient pottery, as well as potential new analytical techniques for identifying the color of wine residues in small samples (Guasch-Jane et al 2004, 1676-1677).

Figure 2. LC/MS/MS chromatogram in MRM mode using m/z 149 f 87 transition showing the tartaric acid (TA) peak in the BM1, BM2, and CM2 sample residues. No tartaric acid is present in BM3 sample, the same as in the blank, and confirmed by the spiked of the sample with standard (Guasch-Jane et al 2004, 1675). 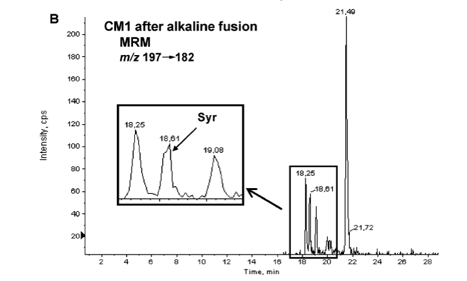