Ivory is used to refer to the tooth or tusk of animals. These teeth or tusks are comprised primarily of a material called dentine which grows on the outside of the tooth. Cells inside the pulp cavity of the tooth, which is a hollow space inside the tooth, forms dentine. Dentine contains both an organic and inorganic component. The organic component is composed of collagen based proteins. The inorganic component is made up of dahllite, a carbonate containing hydroxylapatite (Ca10 (PO4)6 (CO)3∙H2O) (Espinoza and Mann 1992). Regardless of which animal the tusk or tooth comes from, they are all chemically the same. 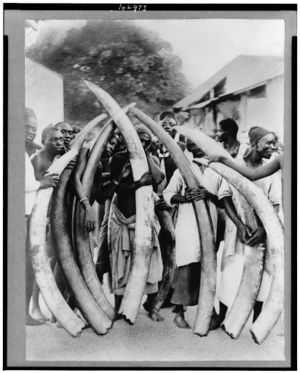 The most common animals used as sources for ivory in art objects are elephants, mammoths, hippos, walrus, sperm whales, and narwhals (Hornbeck 2016). Ivory substitutes have also been used. These include materials such as vegetable ivory, made from the nuts of the Tagua palm tree, and celluloid and plastics beginning in the late 19th century.

Ivory can be distinguished from similar looking materials (i.e. bone, shell, ivory substitutes) using various techniques. The animal the ivory came from can also be determined.

The most common method used for the identification of ivory is examining the material using magnification to look for diagnostic characteristics unique to each type of ivory. Though all ivories are the same chemically, they can differ in the way they grow and appear from animal to animal. This examination can also help determine whether ivory substitutes or other materials, which look similar to ivory, have been used.

Examining an object thought to be ivory using ultraviolet light may help determine whether the material is ivory or made from another material. Using long wave ultraviolet light, materials will fluoresce different colors or absorb the UV light helping to characterize it.

All ivory fluoresces under UV light and appears bluish-white (Hornbeck 2010). Bone and shell have a similar fluorescence to that of ivory. Vegetable ivory will appear slightly orange or warmer in tone. Plastics will absorb UV light and appear dull blue (Espinoza and Mann 1992).

"... the answer to your question is resoundingly and unequivocally clear: elephant ivory was never used for scrimshaw. Not even once. If we find any evidence of elephant ivory on something that looks like scrimshaw or is masquerading as scrimshaw, it's a sure-fire indication of fakery. It's one of the first things we look for todetect fraud, and is evidence sufficient in itself. I have testified in Federal court on exactly this point. Pachyderm ivory (including elephant, mammoth, and mastodon) is almost always (99.9% of the time) readily identifiable by Schreger Lines and a distinctive grain that does not appear in any other species. Whalemen had sperm whale skeletal bone and sperm whale teeth aplenty, they were free, and were a trophies of the hunt; and walrus ivory was sometimes acquiredby barter with Eskimos and Inuit, a trade that was also an integral component of the hunt. Elephant ivory, on the other hand, was irrelevant and not obtainable on shipboard; and the places where it could theoretically be acquired were simply not ports-of-call for whalers -- with the exception of Honolulu, where it was very expensive (especially compared with free).The newly formed ASCA (American Scrimshaw Collectors Association) has as part of its mission to make the very distinctive points that: [1] elephant ivory wasnever used for whalemen's scrimshaw, [2] scrimshaw is an indigenous occupational pursuit of whalers and is an indigenously American pursuit, thus part of our national heritage (dating from circa 1766) and a product of the seafaring prowess of the Young Republic, [3] scrimshaw was a grassroots vernacular genre, practiced by blue-collar common seamen and gentleman-officers alike, notably including African Americans, fugitive slaves, Native Americans, immigrants from Europe, Africa, Asia, and South America, as well as mainstream Yankee farm boys (unlike elephant ivory carving, which is foreign, practiced by professional artisans, marketed commercially, and intended as expensive decorations for the privileged), and importantly [4] no whale was ever killed for the ivory — not even one: whale ivory and whale bone were strictlyafter-market byproducts used by the whalemen for their own tool- and souvenir-making. (The economics are simple: in 2015, the meat and bone byproducts of a sperm whale, depending on size, would be worth $6-12 million in Japan; the ±42 teeth of an exceptionally large sperm whale whale with perfect, well formed teeth -- the very highest quality that could be obtained -- might be worth 0.005% of that on a good day; in other words, next to nothing by comparison.) I repeat: while African and Asian elephants are killed and poached for the ivory all the time, no whale was ever killed for the ivory."

Both the inorganic and organic components of ivory can be susceptible to damage and deterioration. 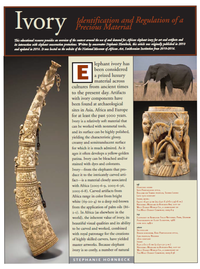 Retrieved from "https://www.conservation-wiki.com/w/index.php?title=Ivory&oldid=50067"
Category:
This page was last edited on 22 December 2020, at 00:36.
Privacy policy
About Wiki
Disclaimers