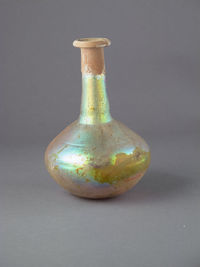 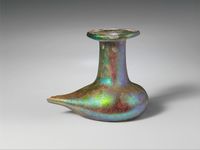 Note: Although iridescence is a property possessed by a wide variety of materials, this entry pertains primarily to the weathering phenomenon of archaeological glass.

Iridescence is a weathering phenomenon of typical of archaeological glass wherein a series of very thin translucent degradation layers on the surface of an object interact with the transmission of ambient light, creating a shimmering, multicolored, opalescent appearance. These degradation layers can develop over time as an object is exposed to water in the burial environment. Although aesthetically appealing to most art collectors, iridescence can be a symptom of highly unstable surfaces. 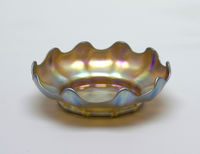 An ashtray made by Louis Comfort Tiffany ca. 1900 with intentionally applied iridescence. Image courtesy of the Cooper Hewitt.

Iridescence can develop on the surface of a glass object after extended periods of time in a burial environment. The extent and rate of archaeological glass degradation depends primarily on its composition and the conditions of its environment. Although multiple factors, such as the presence of salts, oxygen, and microorganisms can affect glass degradation in situ, water is the primary threat to preservation (Roemich 2007, 30-31). When exposed to water, two competing chemical mechanisms proceed in cycles that chemically alter the surface of the glass: leaching of the alkali network modifiers and network dissolution of the silica. These two competing reactions proceed in a cyclical manner and are affected by the pH of the water present in the burial environment (Bellendorf et al. 2010, 142). As the reactions proceed, the leached alkali components are subsequently washed away due to their solubility, leaving behind a series of translucent hydrated, silica-rich, alkali-deficient layers estimated to be about 1 μm or less in thickness (Bellendorf et al. 2010, 138). If enough parallel layers become superimposed, their conflicting refractive indices interfere with the transmission of light. By passing through these translucent layers, the light is subsequently diffracted, resulting in the iridescent effect (Emami et al. 2016, 61). In the mid twentieth century, it was hypothesized that the number of iridescent layers could be correlated to the age of the object in a manner similar to dendrochronology. However, this theory has since been discarded due to a lack of reproducible results (Brill 1961, 18; Newton 1971, 4).

Although aesthetically appealing to collectors, iridescent weathering is a symptom of a deteriorating glass surface. The tendency of a glass to develop iridescent layers depends on both the composition of the glass and the nature of the burial environment. Archaeological glasses with highly unstable, flaky surfaces might have been retrieved from humid environments or might be rich in potassium (Koob 2006, 14). Because the iridescent layers contain original glass material, severe flaking can lead to the loss of the glass surface. Differential weathering within the same object is also common (Koob 2006, 14). Glasses with iridescent layers require higher relative humidity during storage and display as compared to glasses exhibiting other types of weathering (Bellendorf et al. 2010, 143).

In the twentieth century, Art Nouveau glass manufacturers such as Louis Comfort Tiffany began to intentionally create iridescence on their wares for aesthetic reasons. These objects differ from weathered archaeological glass because the iridescence is achieved through the intentional application of a chemical surface treatment (Mäder et al. 2005, 107).

Retrieved from "https://www.conservation-wiki.com/w/index.php?title=Iridescence&oldid=53216"
Category:
This page was last edited on 26 April 2021, at 06:30.
Privacy policy
About Wiki
Disclaimers