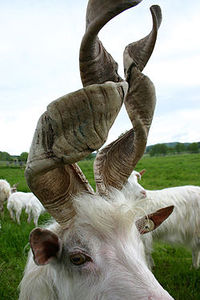 A goat with spiral horns

Horns are natural outgrowths from the skulls of some herbivorous mammals (Florian 2007, 27). For an introduction to this material, refer to the Wikipedia entry Horn (anatomy).

A man demonstrates sounding a shofar at a Synagogue in Minnesota

Horn is the keratinous sheath that covers the surfaces of boney core, which is an outgrowth of the frontal bones of some herbivorous mammals. It grows in layers, slowly thickening overtime, creating a cone-within-cone structure. Each cone is finely corrugated longitudinally and made up of flat or tubular cells aligned parallel to the long axis of the horn containing keratin fibers. This gives horn an anisotropic structure like baleen or claw sheath (unlike tortoise shell). Keratin is a complex protein, held together by hydrogen bonds, polar linkages, and disulphide linkages of cystine. It and can be minimally processed or heated and shaped through the breaking of the disulphide bonds.

The surface of horn is characterized by a structure of fine parallel lines, which distinguishes it from bone, antler, and ivory. Horn exists in a great variety of sizes and colors from white or green to red brown or black. It is translucent when first harvested and the translucency is reduced as it ages.

To distinguish horn from plastics one can use the hot need test and identify through smell.

Horn is thermoplastic and can be molded, cut, shaped, polished, and dyed. To prepare horn for working. The horn needs to be separated from the bone sheath. This can be done through drying or soaking (recommended). Prior to working, any remnants of flesh are removed and the horn is scraped and boiled with soap.

Cold working In cold working, horn stays in its natural state. This process includes carving, piercing, engraving, turning, painting, dyeing, staining, and polishing. Horn is easily dyed by various coloring ingredients. Historically, in Europe, horn has been dyed to resemble tortoiseshell. The usual mixture includes pearl ash, quicklime, litharge, water and dragons-blood, which is boiled for a half an hour then applied hot to the horn (Transactions of Society 1838). Horn has often been polished through a succession of abrasions, pumice rottenstone, charcoal and wood ash, lubricated with water or oil, and finished with chamois leather and hand grease. Examples of cold worked horn includes powder horns, cups, and buttons.

In hot working, the bonds within the keratin structure are broken and the structure is permanently altered through the use of heat, water, and pressure. If sheets of horn are desired, the horn is cut into three or four sections along its length and the base and tip are put aside to be used for some other application. The finest plates and the most transparent leaves come from the central portions of horn taken from oxen and cows, clear and free from striations and other blemishes (Hughes 1954, 154). The sections of horn are then slit along their length with a sharp knife, then submerged in boiling water for a period of time. The horn remains in the water until the material is soften but not so long that it is reduced to gelatin. When soft, the horn is opened up, the sides are greased, and the horn is placed under powerful compression system such as a press or clamping mechanism. This breaks the grain so that the laminae separate slightly. Once cooled, a round pointed knife is introduced between the layers to left and separate the layers.

These layers are scraped with a drawn knife with a wire edge until they are reduced to the proper thickness and transparency. Then, they are smooth and polished with a woolen rag dipped in charcoal dust, and rubbed with a rotten stones.

Horn pieces can be joined through the use of heat and pressure so that the join is unperceivable. This technique was mastered by the Chinese when the joined horn plates to make horn lanterns.

Horn is prone to decay when buried. Alkaline burial conditions are reducing environments and will disrupt the disulphide linkages in the keratin. Reduction will break hydrogen bonds. There are also some keratinolytic bacteria and fungi that will decay keratin. But under certain conditions, especially in slightly acidic conditions, horn can survive burial. Excavated archaeological horn is often expanded and delaminated, or "exploded" from freeze/thaw and wet/dry cycles.

Keratin responds to changes in relative humidity by taking or losing water, which causes dimensional stress and changes. There is often longitudinal cracking down the corrugations, circumferentially between the cones, and less often transversely.

In severely deteriorated horn, the edges of the lamellae appear granular or frayed.

It is recommended that horn objects be exposed to stable temperature and relative humidity conditions, and low light levels (Stone 1988, 2). The optimal conditions include a temperature of 25˚C and relative humidity between 45-55% (Stone 1988, 3). As with other organic materials, it is recommended that illumination be maintained at low levels: light intensity and ultraviolet light should be kept below 150 lux (below 50 lux for dyed objects) and 75µW/lm respectively (Stone 1988, 3).

Pests pose a danger to horn objects; carpet beetle and clothes moths larvae enjoy this material (Stone 1988, 2). It is recommended that horn objects be examined regularly, at least twice a year, for signs of insects and mould growth (Stone 1988, 2).

There are several published examples of consolidating the horn or joining elements in order to provide stability.

For example, in Snow and Weisser (1984) deteriorated ivory and horn was consolidated with 5% v/v Paraloid B72 in toluene. The treatment involved putting the object in a bath ofsolvent first to slowly introduce it to the structure. Then remaining solvent mixed with the resin was added to the container to allow the object to slowly absorb the resin (24 hours depending on size and porosity). Joins demanding structural strength were made with Paraloid B48N 40% v/v/ bulked with Cab-o-sil PTG. AYAF 20%)(v/v) in ethanol was used for less structural joins (Snow and Weisser 1984).

A natural history specimen from waterlogged archaeological site was preserved by submerging the delaminating horn into warm water followed by consolidation with 2-5% solution of Rhoplex AC-33, then drying it slowly under weights, one to four weeks, and using parafilm as a covering to control drying (Peever 1989, 34). According to the article, the treatment was successful. The horn was reshaped but excess adhesive left shiny spots and could not be removed. Treatment was adjusted by using dampened sponge to remove excess during drying provided better results. According to Peever (1989), Acrysol WS-34 is known as good consolidant for bone, but was not used in this instance, because it lacked sufficient tack.

In Murray (1987), waterlogged horn recovered from the Mary Rose warship was freeze-dried with success. One object was dehydrated in successive bath of water/ethanol followed by vacuum impregnation with CALATON soluble nylon and bandaged on removal from vacuum to keep shape Murray 1987, 26).

Retrieved from "https://www.conservation-wiki.com/w/index.php?title=Horn&oldid=20957"
Category:
This page was last edited on 16 February 2015, at 16:08.
Privacy policy
About Wiki
Disclaimers