a groove, cavity, or depression in the surface of an object where material has been scooped out. The loss is caused by physical damage to the object due to an impact with another object or by another object cutting or pressing into the surface without entering the support (CCI 1994). The term is used to describe scooped-like depressions in a variety of art media and supports including furniture, paintings, paper, gilding, metal, and wood. 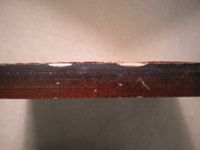 Two gouges in a wooden frame

In July 1963, the term appeared in a memo at the Museum of Modern Art (MoMA) called the Glossary of Terms Used in the Registrar's Records to Describe the Condition of Paintings as one of the subcategories of the damage genre "impact or pressure" (Shaw 2006). It was listed alongside, and thus differentiated from, other terms describing loss including dent, dig, crack, chip, hole, and puncture.

Demeroukas differentiates gouge from the other terms detailing loss in the scooped out nature and shape of the defect (Demeroukas 2010). The shape is similar to the depression created when using the tool known as a gouge; as the tool precedes the damage definition of the word, it is probable that this meaning is derived from the tool’s affect.

The Books and Paper Group of the American Institute for Conservation also notes that the scooped depression may or may not be accompanied by a spot or linear distortion on the surface of the object (AIC 1994).

The English usage of the word gouge for damage does not translate easily into other languages. In French, the word entaille (cut) is used as a synonym for the term and is defined as a concavity caused by removing material on the surface of an object (CCE 1994). The words enfoncement (depression) and rainure (groove) are synonyms for entaille, describing the removal either as an accident or voluntary action respectively (CCI 1994). Enfoncement is also used as a synonym for the English term dent.

Retrieved from "https://www.conservation-wiki.com/w/index.php?title=Gouge_(damage)&oldid=53211"
Categories:
This page was last edited on 26 April 2021, at 06:29.
Privacy policy
About Wiki
Disclaimers