The Photographic Materials Conservation Catalog is created and maintained by the Photographic Materials Group of the American Institute for Conservation for the convenience of the membership. The treatments, methods, or techniques described herein are provided for informational purposes. The reader assumes responsibility for any application results or interpretation of information.

Historical Facts
Invented: Richard Leach Maddox developed the silver bromide emulsion in 1871. The process had to undergo several improvements before it could be an improvement to the use of collodion, eventually becoming faster and allowing for plates to be coated well before exposure time and developed later as well.
In 1873 John Burgess commercialized bottled gelatin silver bromide emulsion, stating it would allow anyone to coat their own plates. The product had problems such as crystalline soluble salts formed by the interaction of bromide and silver nitrate.
Commercial plates started being produced in 1875, coated on one side with gelatin containing a light sensitive silver halide. The plate was loaded onto a plate holder in the dark and exposed in camera. The photographer would develop, fix and wash the plate (possibly applying retouching or coatings after drying).
In 1877, Sir John Swan discovered that cooking the emulsion increased sensitivity and Charles Bennett introduced the ripening step to the process. As a result, dry plates exposures could be 1/20th of that of collodion plates.
Significant improvements were also made by adding dyes to the emulsions, expanding the spectrum of the light sensitivity from the initial UV/blue to yellow/green (orthochromatic plates, 1884) to full light visible spectrum (panchromatic, 1906), the latter development allowing for the introduction of [Autochrome| color photography].
Main Period of Use: 1880 - 1925
Historic Practitioners: 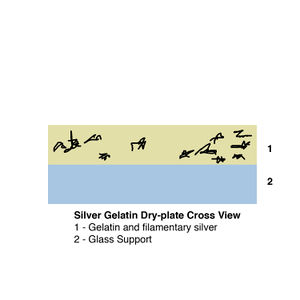 Image layer: Filamentary (developed) silver, neutral gray in tone. May have retouching and varnish. If plate was intensified with mercuric iodide it may have a bright lemon-yellow appearance (silver-iodide).
Binder: Gelatin all the way to the edge of the support.
Support: Glass coated on one side with the emulsion. May have masks applied to opposite side of the image layer (red inks, paper masks). Glass plates came in a range of standard sizes established in 1891 after the International Congress of Photography in Brussels.
Analysis:
Non-Destructive
Destructive


Process Overview
The plates were commercially available as a glass plate coated with a gelatin emulsion with a light-sensitive silver halide. The plate was loaded onto a plate holder in the dark and exposed in camera. A latent image was formed and the plate was then chemically developed. During development filamentary silver particles formed. The size and shape of these silver particles produce a neutral image tone. The plates were fixed and washed. Intensification baths could be used if the image was weak, such as mercuric iodide. Graphite retouching or coatings could be applied after drying. A variety of varnishes were used as coating, sometimes only on the face area of a portrait to allow for retouching on that area.

Retrieved from "https://www.conservation-wiki.com/w/index.php?title=Gelatin_Dry-plate&oldid=19027"
Categories:
This page was last edited on 28 October 2014, at 04:32.
Privacy policy
About Wiki
Disclaimers