Contributors: Originally drafted by Tae In Ahn and Annaick Keruzec. Editors: Maria Fusco and Laura Mina
Additional contributions by: Jennifer Cruise and Patricia Haviland.
Your name could be here! Please contribute.
Copyright: 2022. The Textile Wiki pages are a publication of the Textile Specialty Group of the American Institute for Conservation of Historic and Artistic Works. The Textile Wiki pages are published for the members of the Textile Specialty Group. Publication does not endorse or recommend any treatments, methods, or techniques described herein.

During conservation internships at the Textile Museum, the lead authors of this section had the opportunity to work on costume mounts using Fosshape. The Textile Museum was introduced to Fosshape by the staff of the Cincinnati Art Museum in 2009, with the exhibit Contemporary Japanese Fashion, and began using this material, which was still relatively new to the museum industry. The authors were introduced to and encouraged to work with the material by head conservator Esther Méthé and associate conservator Maria Fusco. During their internships, they created two mounts for the exhibit Unraveling Identity, an invisible mount for a white tshirt prop and a 19th c. African cape. The authors were guided by the work of Cynthia Amnéus and Marla Miles (2012) during the process, and experimented with various applications and methods. As Amnéus and Miles mentioned in their article, constructing a mount out of Fosshape proved to be an effective and agreeable process for creating a sturdy, sculptural form.

The following includes a brief introduction to Fosshape, together with general guidelines for its use, and observations made while working with this material for specific mounts.

Fosshape has traditionally been used in theatre sets to create a variety of forms, ranging from props and scenic elements to costume elements, such as millinery and masks. It is a nonwoven, proprietary 100% polyester polymer blend with no additives or post treatments (Amnéus and Miles, 2012; www.dazian.com). Fosshape is typically white, and is available in two weights (or thicknesses), 300 and 600.

When this felt-like fabric is activated by dry or steam heat (in the range of 100-130˚C or 212-265˚F), the fibers begin to soften or melt, causing them to contract and become rigid on cooling. Incidentally, heat activation causes the material to shrink up to 30%. (See the reference section below for more information on Fosshape properties.)

The first step of the process is to make a pattern. If the shape of the mount mimics a dress form, the pattern can be taken right off the form. It is advisable to transfer the pattern to paper before executing it in Fosshape. The pattern needs to be as precise as possible. While Amneus and Miles recommend adding 4” on each side, during the process of shrinking the Fosshape this allowance may be too large for some purposes. Adding 2“ on each side was found to be enough in the case presented [Fig. 1].

Sleeves were added separately. Here only ½“ of seam allowance was added. Fosshape appears to shrink in only one direction, and it may be easier to handle the shrinking process with a smaller seam allowance.

A different approach was taken when creating a mount that required some sculpting. With the Chief’s tunic or cape [Fig. 2], a mount was created using a male dress form. After consulting with the curators, the desired look of the tunic required slight extension at the sides with a draped effect along the bottom. Measurements of the tunic were taken while it was placed on the dress form with attached arms. Using the center front, elbows, and waistline as fixed points, the draped curves along the bottom edge of the tunic were measured and sketched. A pattern was made taking into account the cumulative width across the bottom of the tunic, adding an extra 5” to the length, since it had not been decided at the time whether the mount should peek out of the bottom edge or if it should be invisible. 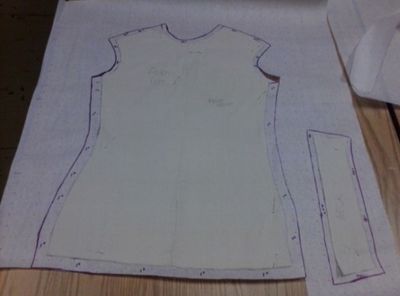 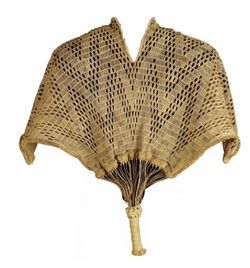 Fosshape can be sewn by hand or machine in both its treated and untreated forms. Machine stitching in its untreated form is optimal. Although sewing Fosshape in its hardened state is possible, hand sewing can be tedious. If so, it is advisable to use a long straight needle, or a strong surgical needle. Instances that require hand sewing included attaching the sleeves separately onto the mount (Figs. 3 and 4).

It is important that the stitches be as dense as possible, otherwise there will be puckering at the seams once the Fosshape has shrunk. It is recommended to adjust the sewing machine to the shortest stitch setting and appropriate tension, and to keep the hand stitches small and close together. 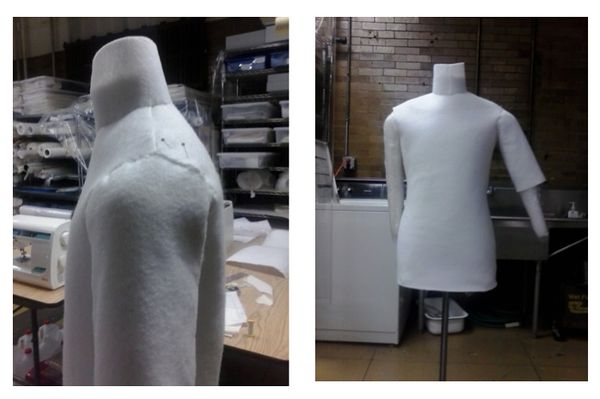 The surface of Fosshape tends to create a dimpled and wrinkled texture when in contact with wet heat (Fig. 5). A tacking iron at medium setting helped smooth out the uneven surface, in addition to hardening the material. This was effective in creating a smooth, matted-down surface (Fig. 6). Although a piece of Mylar was used as a barrier between the iron and the Fosshape, the tacking iron left a few discolored areas on the Fosshape, giving it a somewhat dirty or unpleasant appearance. Since the Fosshape was not going to show in the end and was covered in black jersey, the yellowed areas weren’t an issue. 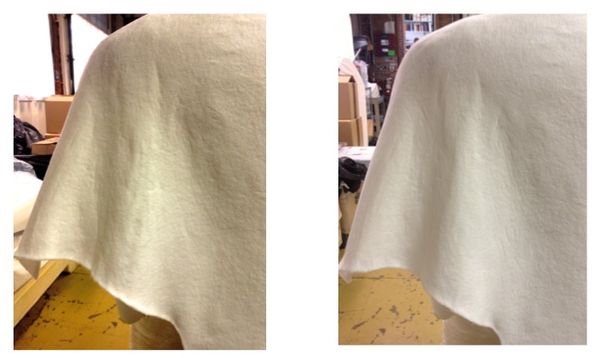 Figs. 5 & 6. Before (left) of dimpled area and after (right) improved surface from smoothing out with a tacking iron. Photos by T. Ahn

The level of stiffness of the Fosshape can be controlled by the application of the heat source as well as the pressure. As the costume mount for the Chief’s Tunic was prepared over a year prior to exhibit, the extended time the mount would be spending in storage was taken into account and, as a precaution, the Fosshape mount was made extra stiff. This was done by heat activating the Fosshape mount on both the outer surface and the interior, and reapplying the heat with the garment steamer and tacking iron

After the process of shrinking, a straight line was cut on the backside of the T-shirt mount to remove the Fosshape from the dress form. It is possible to cut it with a sharp box cutter. In this step it is possible to cut the sleeves, neck and bottom of the costume mount.

It is advisable to reinforce the seams inside the mount by attaching a strip of Fosshape. This strip can be hand stitched along the inside and then heat activated, or it can be heat activated first then adhered to the inside with a hot glue gun (Figs. 7 and 8). 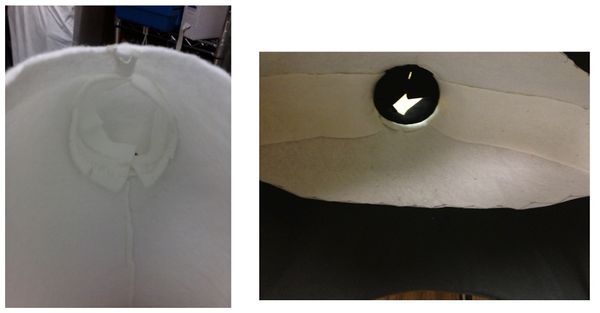 As a final step, an Ethafoam core was carved in the shape of the mount to place inside, as this stabilizes the structure (Figs. 9-12) . 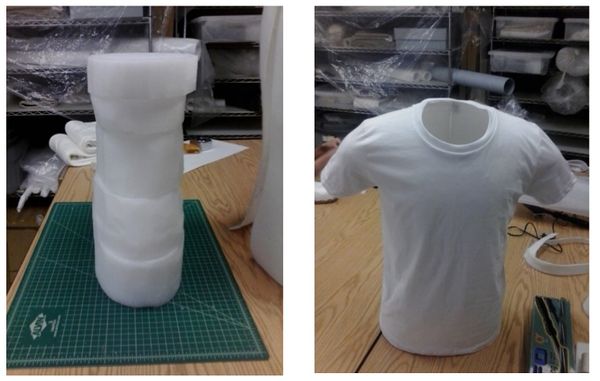 Fig. 9 & 10. Ethafoam core and costume mount for shirt. Photos by A. Keruzec

Suppliers of Fosshape, and of the related materials Wonderflex and Worbla

A blog post from the V&A describing their use of Fosshape to make custom limbs in action poses for a fashion exhibit.

Retrieved from "https://www.conservation-wiki.com/w/index.php?title=Fosshape&oldid=39616"
Categories:
This page was last edited on 27 January 2020, at 20:07.
Privacy policy
About Wiki
Disclaimers