Feathers are the unique epidermal growths of birds, which allow for flight and provide insulation and waterproofing, environmental protection, and allow for display and camouflage. Like hair and horn, feathers are made of keratin. For the purposes of conservation documentation, preventive care and treatment, it is useful to become familiar with some of the basic terminology used to describe feather parts, types, location and color.

• Calamus: the hollow inner portion of the feather shaft that lacks barbs and attaches to the skin; sometimes called the quill

• Rachis: the solid upper portion of the feather shaft, to which the barbs are attached

• Vane: extends from each side of the rachis, made up of interconnecting barbs

• Barbicels: hooks that cover barbules and that interlock with each other upon contact

• Contour: These feathers make up the majority of feathers visible on a bird. They typically have a stiff shaft that extends their entire length and a vane on each side of the shaft. Also called pennaceous feathers.

• Semiplume: In appearance, semiplumes fall between contour feathers and down feathers, combining a large rachis with downy vanes, due to the fact that the barbs lack barbules. Semiplumes are distinguished from down feathers in that the rachis is longer than the longest barbs.

• Down: Fluffy feathers that appear to lack structure. The barbs of these feathers lack barbules, and the feather shaft is either reduced in length or missing altogether.

• Filoplume: Simplest type of feather, consisting primarily of the rachis with little to no barbs.

• Bristle: Highly specialized, small contour feathers which lack barbs on the outermost part and have a stiff rachis.

• Remiges: Flight feathers on the wing. Outer wing feathers (primaries) are pointed and have a distinct narrowing in the posterior vane, called a notch. The inner wing feathers are called secondaries.

• Rectrices: Flight feathers on the tail. The outermost tail feathers are asymmetrical with a narrow outer and broad inner vane. Towards the center of the tail the feathers are more symmetrical.

• Coverts: Feathers that border and overlay the edges of the remiges and rectrices on both the lower and upper side of the body.

• Afterfeather: Much smaller feathers attached to the lower shaft of some contour feathers; resemble the main feather.

The identification of bird species from feathers and feather fragments is most challenging. Variation in color, size and shape occurs not only among families but also within individual species. Nevertheless there are similar characteristics that cross species and family, therefore morphology, size, color and color pattern contain valuable information. See Scott et al. 2010; Trail 2003. 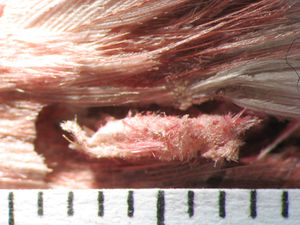 Feathers are susceptible to attack by insects and other pests, especially those that feed on protein-based materials. While still on the living bird, feathers can be damaged from feather lice and mites. Once incorporated into artifacts, feathers may be damaged by a variety of insects, including clothing moths and carpet beetles. In both clothing moths and carpet beetles, it is the larvae that cause damage.

Feathers sustain mechanical damage both while on the living bird and after the feathers have been harvested and incorporated in an artifact.

Mechanical damage that occurs on the living bird includes fault bars and vane loss from fault bars. Fault bars are narrow, translucent bands caused by defective barbule formation, often caused by stress in the bird. Within a fault bar, the barbules are either aberrant or missing entirely. These translucent bands are susceptible to feather breakage and can leave a feather with more than one fault bar with the appearance of a serrated edge.

Other types of mechanical damage seen on feathers include unlocked barbs and abrasion, bends, breaks on both the shaft and the vanes.

The Cornell Lab of Ornithology. All About Birds

Retrieved from "https://www.conservation-wiki.com/w/index.php?title=Feathers&oldid=55609"
Categories:
This page was last edited on 14 January 2022, at 21:01.
Privacy policy
About Wiki
Disclaimers