-A section of faded color on a work

-To be more specific, “Change in color brought about either by differential fade rates of dyes or by an imbalance of dyes in an image area (AAT 2004). 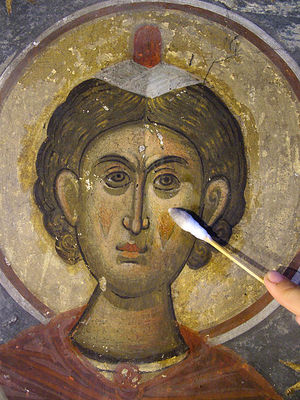 "Conservation at the Church of Sucevia" (September 2006)

In the University of California’s Berkeley Art Museum and Pacific Film Archive from June 18th-August 24th, 2014; there was an exhibitnamed Color Shift. “Inspired by Albers’s ideas, Color Shift presents artworks from the early twentieth century to the present that explore color relationships within abstract compositions (UC Regents 2015).”

When talking about the Color Rendering Index and LEDs, “the perceived color shifts seen when viewing test colors under the test and reference illuminants are calculated using mathematical models of human color vision.’ ‘They may not however correspond with what we actually perceive under real-world circumstances (US Department of Energy 2008).”

As an example, it is assumed that color shift could be seen in the following different mediums: paintings, photographs, paper arts, pastel works; drawings created with Prismacolor pens, Prismacolor pencils, or via pen and ink where the original color has been faded due to too much light exposure (either natural light or ambient light). In older non-digital photographs, this could also be due to double exposure, where one photograph has been taken over another in the film spool and there is discoloration.

Retrieved from "https://www.conservation-wiki.com/w/index.php?title=Color_shift&oldid=53185"
Categories:
This page was last edited on 26 April 2021, at 06:25.
Privacy policy
About Wiki
Disclaimers