A lightened or whitish area in layer of paint or varnish layer due to microscopic defects (voids, granules, etc.) that develop within a film layer as it ages. The defects can scatter light making the affected area appear lighter than the surrounding areas. It is distinguished from bloom, which is a surface phenomenon. (Getty Research Institute, 2004) 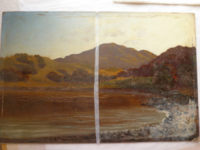 Occurrence of blanching appears as chalkiness on surface layer of painting. Caused by cleaning with solvent in excessively humid conditions. 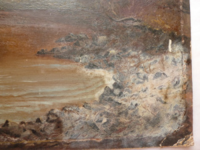 Detail of blanching on painting. Common occurrence while treating paintings in high humidity

During removal of varnish some areas of a painting may take on the appearance of matt and whitish splotches. In these areas the details of the painting may be completely obscured. This damage is due to the fast evaporation of the media used during varnish removal, where a certain amount of the original varnish is left over. Also some chemicals used in the manufacture of paints and ground preparations may also contribute to this blanching effect.

Another school of thought explains Blanching as a phenomena that appears when excessive environmental moisture becomes securely incorporated in to varnish, interfering with the direct transmission of light to and from the painted surface. In such cases, light no longer travels smoothly through the varnish, to the paint layer and back to our eyes, but instead is refracted by pockets of moisture that interrupt the alignment of varnish molecules. the problem is further compounded when dirt also becomes embedded in this layer. the result is that the artist’s pigments appears to be less bright and more chalky then they actually are. The application of appropriate solvent can often reform blanching by redissolving the varnish, which frees trapped moisture and allows the varnish film to dry smoothly again. But this approach does not allow for the complete removal of trapped dirt. (Bhardwaj)

Demeroukas describes blanching in glossary of painting terms as irregular, obtrusive, pale or milky areas in paint or varnish; not a superficial defect like Bloom but a scattering of light from microporosities or granulation in aged films. (Demeroukas, 2010)

Bhardwaj, Deeksha. "Conservation Problems of the Surface Layer in an Oil Painting." Life in a Fencible Village. https://villager1850.wordpress.com/category/collections/paintings-conservation/conservation-of-paintings-from-col-arthur-morrow-collection/(accessed 16 March, 2015)

Jewett, D. 1983. A glossary for recording the condition of an artifact. Ottawa : Canadian Heritage Information Network, National Museums of Canada.

Retrieved from "https://www.conservation-wiki.com/w/index.php?title=Blanching&oldid=53170"
Category:
This page was last edited on 26 April 2021, at 06:21.
Privacy policy
About Wiki
Disclaimers