These non-invasive imaging techniques help visualize and map features of a painting beyond the observation capabilities of the unassisted human eye. They are distinct from standard documentation photography in that they require a modified camera or purpose-built instrument as well as a variety of bandpass filters to define the range of wavelengths detected. Some procedures characterize or even tentatively identify materials, while others help to define an artistic technique or condition issue. The information present in each captured image will vary based on the incident radiation (illumination) and the response of the painting to the radiation, as well as the image processing techniques used. For convenient additional reading, a list of online references from AIC Guide to Digital Photography and Conservation Documentation can be found here.

Because of the ubiquity of digital photography and processing, those methods will be assumed; however, some spectral imaging techniques can be carried out with film photography (Moon et al. 1992). Just as with hard copy files, a plan for archiving digital files is a requirement for proper documentation. Protocols for both storage and management must be put in place to prevent loss of visual information and its context (Saunders 2012). 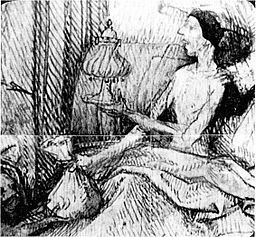 Infrared (IR) reflection imaging or infrared reflectography is historically the most common type of IR imaging. IR reflection imaging exploits the fact that carbon-based materials absorb infrared radiation and appear distinctly black in the monochromatic imagery. This phenomenon is most often used in paintings conservation to visualize a carbon-based underdrawing against an IR-reflective ground layer. If the ground layer is not sufficiently reflective, IR reflected imagery can be combined with transmitted light to enhance visualization. Using this technique, details of the drawing technique, preparation, and hidden compositional changes may be discovered, and inscriptions may be more easily deciphered (van Asperen de Boer 1968). In standard reflected IR, pigments may be differentiated from one another based on their relative absorbance or reflectance. The primary limitation of this technique is that it relies so heavily on the presence of carbon-based materials to yield information; traditional underdrawing is not included as often in modern and contemporary art as in older paintings.

IR luminescence imaging, also called visible-induced IR luminescence, refers to the capture of luminescence in the near infrared (NIR) spectral region induced by incident visible light; it is only viewable by eliminating reflected visible light from the capture. IR luminescence is not a wavelength-specific phenomenon, so it cannot be used alone for definitive identification. That said, when used with other confirmation analysis, the technique is highly sensitive to the presence of the pigment Egyptian blue and can map its presence and distribution even in damaged areas that no longer appear blue. Such observation of the presence of this pigment in mixtures and as single, incidental particles has provided valuable information about historic artistic practices (Ganio et al. 2015). IR luminescence also has crucial condition implications for cadmium pigments: luminescence of cadmium yellow (cadmium sulfide) indicates that photodegradation of the pigment has begun, even if the effects are not yet apparent under visible light observation (Mass et al. 2016). Other colorants that luminesce in the NIR include Han blue and Han purple.

IR reflection and luminescence imaging use much of the same equipment, except that IR luminescence requires the addition of a bandpass filter on the camera to eliminate visible light. Incandescent and halogen visible light sources contain the spectral radiation required for both types of imaging, though lamps with more specific outputs are available, and IR luminescence will give a clearer image when an IR-free illumination source is used. For capture of reflected IR, Vidicon systems were introduced in the 1960s as the first alternative to film photography, and a few are still in use. Vidicon tubes use a PbO-PbS detector with sensitivity of 500-1900nm or 2200nm. These systems do not have high spatial resolution and are not equipped to record the live view. Contemporary capture systems include standard DSLR cameras modified to remove their IR filter, which expands their silicon CCD detector sensitivity to 750-1050nm. Modified DSLRs require external filtration of visible light. Purpose-built, higher sensitivity and higher cost instruments may have detectors of platinum silicide (PtSi, 1200-2500nm or 5000nm), indium gallium arsenide (InGaAs, 900-1700nm), indium antimonide (InSb, 1000-3000nm or 5000nm), or cadmium mercury telluride (MCT, 1000-2500nm). The camera lens in use will have an effect on the resolution achieved in the longer wavelengths (MacBeth 2012). Bandpass filters to narrow the range of wavelengths captured may be utilized to further clarify visualization based on depth of penetration (MacBeth 2012). 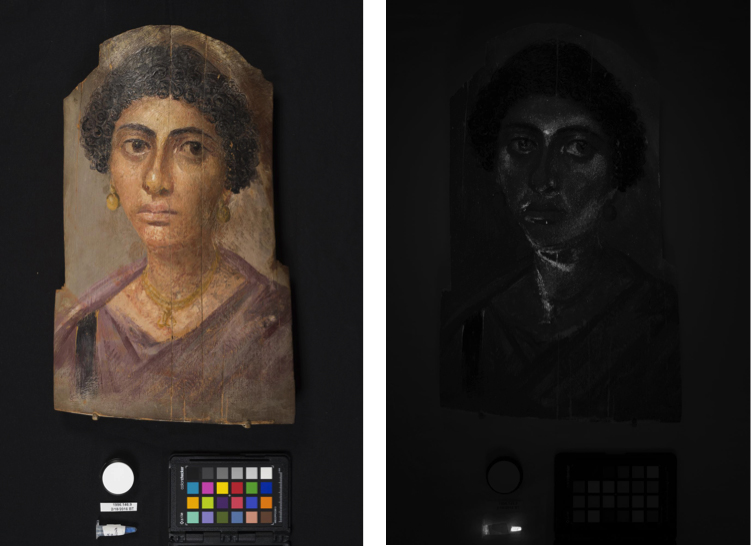 To improve the reliability and reproducibility of what has historically been a subjective technique, specific capture and processing procedures have been implemented in recent years to limit variables in UV imaging (CHARISMA; UV Innovations). These protocols, combined with specific reference standards for UV-induced visible fluorescence, can greatly improve consistency in interpretation (Sexton et al. 2014). UVA radiation sources (the standard excitation source used in paintings conservation, although there is occasional use for UVB and UVC sources) should have a primary spectral output in the range of 360-370nm. Options include filtered low pressure mercury fluorescent tubes (368nm output), filtered high pressure mercury vapor lights (334nm and 365nm), filtered xenon arc lamps, and LED lights (various narrow wavelength ranges). Most DSLR cameras are capable of capturing images in the UVA region; a bandpass filter and photo processing to eliminate visibly blue incident radiation improves the quality of the image. 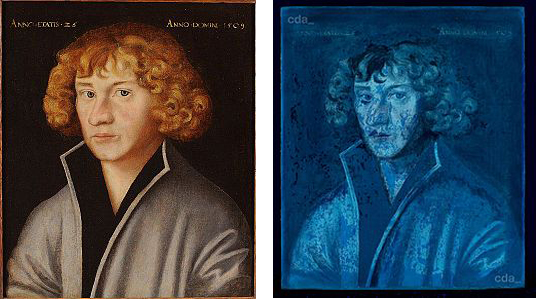 Multispectral imaging, generally speaking, is the mapping of reflectance spectra across the surface of a painting at many different wavelengths (Ricciardi et al. 2013). Typically, eight to 15 images are captured in broad spectral bands from UV to the near IR region, with the band-width varying from about 10 nm to a few hundreds of nm. Other than an increase in images produced, what distinguishes multispectral imaging from visible, IR, and UV imaging is that the resulting image maps are spectrally calibrated. Reflectance spectra curves can be pulled from the results and analyzed. This makes the images not only useful for overall comparison of spectral and optical features, but also for material spot analysis, which can then be extrapolated to other relevant areas on the map. In conjunction with confirmation analysis, multispectral imaging can be used for identification of specific materials. The variation in the NIR reflectance curves of several blues, for example, is wide enough that they can be differentiated and tentatively identified at multispectral imaging bandwidths (Delaney et al. 2005). This has also been done with certain yellows.

False color imaging is a form of post-process image manipulation that uses bright colors in the interpretation of monochromatic images in order to distinguish different materials more easily (Cosentino 2016). In its most common use, the tri-channel coloration (red, green, blue) of images is manipulated by superimposing an IR reflected image or UV reflected image with a visible reflected image (MacBeth 2012). False color imaging may also be used in tandem with various analytical techniques such as hyperspectral imaging, allowing for easier visualization, interpretation, and identification of materials, particularly colorants (Delaney et al. 2010). Kulbelka-Munk correction is another type of digital post processing based on the Kulbelka-Munk theory of pigment-binder interactions (Kulbelka and Munk 1931). It is a mathematical function that can be applied to luminescence images in an attempt to compensate for luminescent binders affecting the spectral response of a pigment (Dyer et al. 2013).

Reflectance transformation imaging (RTI) combines a flash bulb photographic protocol with vector-based computational post-processing to produce an image that can be virtually relit from any angle (CHI 2017b). To achieve this, a series of photos is taken with the camera at a fixed point, and for each photo the flash is moved to a different location at a fixed distance from the object. The accumulation of captured angles of reflected light off of dedicated spherical standards provides the software with enough information to derive the pixel-by-pixel, 3-dimensional shape and texture of the painting, which can then be viewed as an interactive 2-dimensional image. Adjusting the angle and direction of incident light and shadows for the virtual representation of the painted surface allows for virtual viewing of the painting in raking or specular light, giving highly detailed assessment of brushstrokes, overlapping layers, tool marks, canvas weave, texture, and other surface features (Smithsonian). Interpretation can be aided with viewer features such as desaturation and specular enhancement.

Equipment is relatively low-cost and easy to transport, making this technique useful in a wide variety of lab, studio, and off-site situations. Any DSLR camera can be used, but a higher MP detector and finer focus lens will improve the quality of the imagery and yield more information. The other primary pieces of equipment required are a mount to keep the camera steady, a flash, a reflectance reference sphere, and a fixed-distance string. The software for processing and viewing are available as a free download from Cultural Heritage Imaging.

3-dimensional imaging covers a variety of techniques ranging from architectural documentation to fine art crating. Photogrammetry is a measurement technique used most often for large-scale paintings such as murals and frescoes. To record dimensionally accurate shape and texture, a strict image capture procedure is followed to record both camera calibration and pose and to repeatedly refine the virtual documentation image to the user’s specifications (CHI 2017a). The technique is most often used for documentation of present appearance, but it can also be used for monitoring of decay and as a reference for small scale models. Photogrammetry has also been used to monitor changes in deformations in a painting support during treatment (Heydenreich 1994).

Laser scanning and milling can be used to document ephemeral or degradation-prone artworks for virtual preservation, and potentially produce minutely detailed replicas/facsimiles for use in handling or display (Wachowiak and Karas 2009). Laser scanning and milling can be also be implemented to create custom-contoured storage housings or travel crate padding for unusually shaped paintings. (Zycherman and O’Banion 2013). Available lasers for comprehensive surface scanning can yield precision of 0.25-0.5 mm even when working at high speeds, making this an ideal choice for some complex situations.

Ricciardi, P., J. K. Delaney, M. Facini, and L. Glinsman. 2013. "Use of Imaging spectroscopy and in situ analytical methods for the characterization of the materials and techniques of 15th century illuminated manuscripts." Journal of the American Institute for Conservation 52 (1): 13-29.