The Autochrome is a unique color transparency on a glass support. 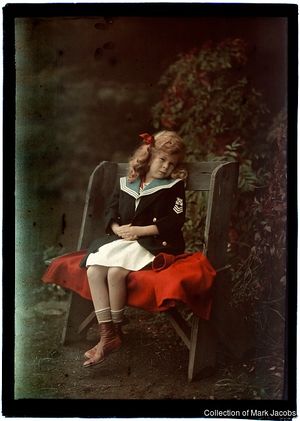 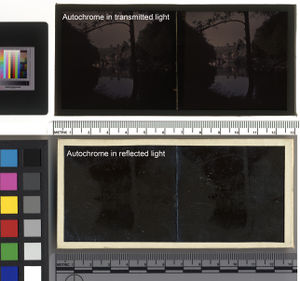 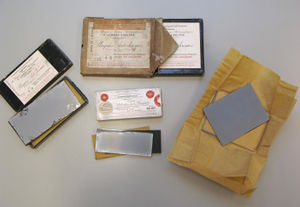 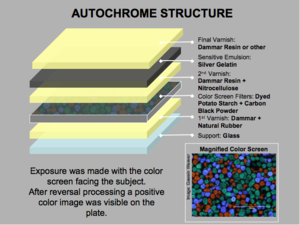 Analysis: Non-Destructive - The potato starch grains are approximately 15 microns in diameter, and are visible under magnification with transmitted light. Positive identification of starch (as opposed to other color-screen materials) can be obtained by using transmitted polarized light, where the starch grains will appear to have a cross over them.
XRF would show presence of silver.
Destructive - FTIR would detect the protein (gelatine) and varnish layers, but GC-MS would be necessary to fully characterize them. 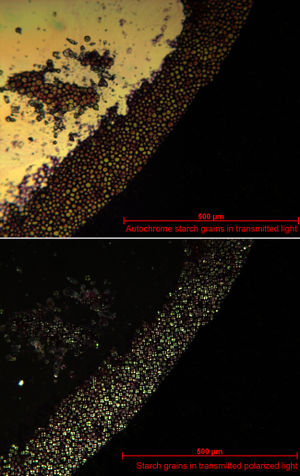 The glass was coated with varnish, followed by a layer of dyed potato starch grains with a random distribution of color, followed by another layer of varnish. A fine black pigment would also have been applied directly after the starch grains in order to fill any vacancies present between them. A layer of silver-gelatin emulsion was then applied, followed by a final layer of varnish. During exposure of the plate in the camera, the starch grains act as filters of different wavelengths of light before it reaches the light sensitive silver-gelatine emulsion. The plate would then be developed and washed, and then chemically treated to bleach out the negative silver-based image. The plate would then be exposed a second time to light, thus creating a positive silver-based image, redeveloped and washed, and varnished a final time. When viewed with transmitted light, the dyed starch grains give the image a colored appearance in the mid and highlight areas. To protect the image, another plate of glass of equal size would have been affixed to the image.

Treatment procedures for autochrome plates are limited to stabilization of the glass components (support and cover glass) by placing them against one or between two additional glasses and binding them with tape (commonly Filmoplast P90); surface cleaning using air bulb; and stabilization of delaminating image layer (Waldthausen et. al. 2001).
The image surface is very sensitive to abrasion by contact so cleaning with a brush or cotton should be avoided.

Autochromes should be sealed to protect them from the damaging effects of oxygen and any air pollutants. They should be stored in a dry and cool environment to prevent degradation of both the silver image particles and dyes.
Freezing of autochrome plates is not advised due to risk of delamination of the image layer due to differential expansion and contraction of the various components.

Exposure to water will cause great, irreversible damage to the autochrome image layer. This is commonly observed by the formation of green stains that are caused by the solubilization of the dyes present in the green filters.
Freezing is not advised due to the risk of image layer delamination as well as of risk of mechanical damage to the glass support due to pressure of moisture in microcracks.