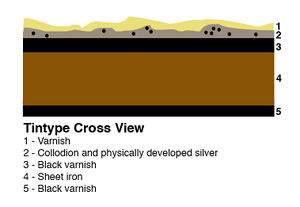 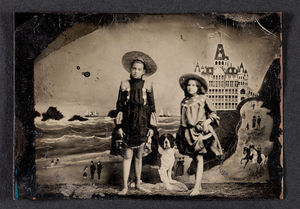 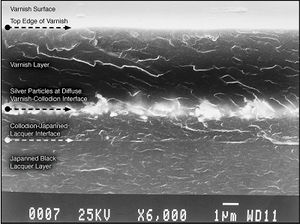 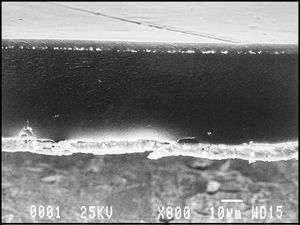 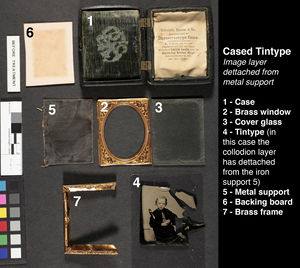 Image layer: Highlights are collodion and physically developed silver. Shadows are the varnished support. Tintypes commonly show low contrast.
Color: Monochrome (may have applied color).
Support: Tin metal plate.
Analysis: Earlier tintypes may be housed in cases, similar to that of an ambrotype or daguerreotype. In these cases, to distinguish from an ambrotype a magnet may be used for a quick identification of the support. Later tintypes were commonly pasted onto paper cards, often surrounded by decorative borders. The plate was attached with gummed paper that was attached to the back of the plate and the paper window mat. Tintypes were also commonly mounted onto albums or jewelry (buttons, earrings, etc.).

The tin plate must be wet for the whole procedure - sensitizing, exposing, developing, fixing, and rinsing. Collodion is poured to the center of the plate and allowed to flow to cover the whole plate. Surface tension and a steady hand keep it from spilling. Once it sets up somewhat, the plate is taken into a dark room and placed into a bath of silver nitrate, which sensitizes it. Then the plate is placed into a plate holder (a back for a large format camera). Then the plate is placed in the camera and exposed. It is only sensitive to blue/UV light, so artificial blue-light sources are helpful, and sunlight is effective. Because the exposed surface of the plate is also the final image, the result is a reverse image. The camera back is taken into the darkroom and a shot-glass of developer is poured onto the surface and must be poured evenly or defects result. After about 30 seconds, the plate is rinsed. It is fixed in hypo or potassium cyanide to dissolve the remaining unexposed silver salts. After the plate is dry (sometimes dried over heat), varnish is poured on to protect the image.

Retrieved from "https://www.conservation-wiki.com/w/index.php?title=Tintype&oldid=47838"
Categories:
This page was last edited on 30 August 2020, at 19:15.
Privacy policy
About Wiki
Disclaimers