Difference between revisions of "Instrumental Analysis of Paintings"

Spectroscopic analysis involves characterizing or identifying materials at the molecular level based on how they absorb, transmit, or scatter radiation from different regions of the electromagnetic spectrum. Data is presented as a spectrum, usually plotting radiation wavelength against the intensity of absorption or emission by the material component in question, whether atom, bond, or molecule (Skoog and Leary 1992).

X-ray fluorescence spectroscopy (XRF) is a non-invasive technique in which x-ray radiation induces excitation of elements at the atomic level, producing characteristic fluorescence. Current detection limits typically prevent distinguishing between elements below the atomic weight of calcium on the Periodic Table; the use of accessories such as a vacuum attachment can increase the detection range down to sodium (Beckhoff et al. 2006). When used in analysis of paintings, XRF can assist in the identification of inorganic colorants present in paint, although detection of elements without molecular or other contextual information cannot specify exact colorants; mixtures of paint and multiple layers of paint further complicate interpretation. Reference standards are required for objective quantitative analysis, although proficient users can gain relative quantitative and stratigraphic information from comparison of numerous readings (McGlinchy et al. 2012). While this technique is usually performed as a spot analysis, recent development of custom-built XRF scanners allows for mapping of elements across an entire painting (Alfeld et al. 2013).

Fiber optic reflectance spectroscopy (FORS) is a non-invasive surface technique that measures reflected radiation in the ultraviolet, visible, and/or near-infrared range. The information results from the bonds between elements rather than the elements themselves, so qualitative information about both inorganic and some (non-transparent) organic compounds can be gained (Cavaleri 2013). Interpretation relies upon comparison to reference standards, ideally made in-house and customized to the pertinent analytical situation (Picollo et al. 2007), but online databases are also available, such as from IFAC-CNR. Ultraviolet/visible spectroscopy can also be performed with transmitted radiation, which requires the removal and solubilization of a sample.

Fourier transform infrared spectroscopy (FTIR) yields qualitative molecular information based on how materials respond to infrared radiation, measuring characteristic changes in the vibration energy of functional groups. The infrared radiation can be either transmitted or reflected, and the two modes rely on separate reference libraries for interpretation. Transmission mode, currently more common, requires removal of a sample, which can be reused for future analysis; reflectance mode can be performed non-invasively, and its use is increasing as reference libraries improve. FTIR yields information about both organic and inorganic compounds, making it useful for analyzing colorants, binding media, coatings, and fillers. Organic compounds can be classified as gum, protein, oil, or resin, and many inorganic compounds can be identified more precisely, with notable exclusions being oxides and sulfides. Quantitative analysis is much less common, but it is possible to do so by creating a calibration curve. (Derrick et al. 1999)

Raman spectroscopy uses a laser in either the ultraviolet or visible electromagnetic range to induce small, characteristic energy shifts in a molecule’s electric field, which are measurable upon re-emission of the energy from the sample. Most organic and inorganic pigments, as long as they are not excessively reflective or fluorescent, can be identified with this technique. This makes Raman useful for analyzing a wide variety of colorants and fillers. For example, it is one of the only ways to distinguish between the anatase and rutile phases of titanium dioxide (titanium white). Raman can be performed in-situ or on a removed sample; the technique may be destructive depending on the type and intensity of laser used. (Edwards 2005)

Scanning electron microscopy coupled with energy dispersive spectroscopy (SEM-EDS) scans a sample with an electron beam, and the resulting backscatter produces an ultra-high magnification image of the sample along with an elemental map of the viewed surface. The image may be useful for examination of pigments, cracks, lead soap formation, microstructures, and other material qualities. The elemental analysis results are more specific than those from (non-scanning) XRF, because the distribution of elements is visualized; often this technique is employed on a cross-section sample, clarifying the stratigraphic distribution of elements. Also, SEM-EDS is capable of measuring the response of elements with atomic size as small as boron. SEM requires removal of a sample, which usually cannot be reused for other forms of analysis. (Townsend and Boon 2012)

X-ray diffraction (XRD) analysis is exclusively useful for identification of crystalline compounds, whether organic or inorganic. During analysis, X-ray radiation is diffracted by the sample’s crystal lattice in characteristic patterns, yielding both qualitative and quantitative results. Most common XRD practice requires sampling. (May and Jones, eds 2006)

Optical coherence tomography (OCT) is a non-invasive technique that can gain both surface and subsurface information about a painting based on the materials’ response to an infrared laser (Liang et al. 2008, Targowski et al. 2012). A broad band infrared laser is split into a scanning beam that is reflected off of the painting, and a reference beam measures the distance the reflected radiation has traveled, resulting in a monochromatic depth profile of the area scanned (Liang 2014). The depth of penetration is determined by how much the scanned material absorbs or scatters light (Cheung et al. 2015a, 2015b). A linear scan produces a single cross-section, and a square area scan produces a virtual cube. The cube can be viewed in cross-section from any angle and also in thin slices of depth parallel to the painting’s surface. The thin slices are especially useful for studying underdrawings in ultra-high resolution, and even differentiating between multiple layers of application. The cross-sections have been useful in distinguishing the full stratigraphy of old master paintings, including multiple coatings, glazes, paint layer, imprimatur, and ground (Spring et al. 2008, Cheung et al. 2015a). Coatings information such as varnish removal may also be studied (Nankivil et al. 2015). Study of modern and contemporary paintings may be hindered by the infrared-scattering qualities of many modern pigments, such as titanium white and cadmium pigments, which obscures viewing lower layers (Ford et al. 2016). However, recent development of a purpose-built instrument at Nottingham-Trent University can potentially overcome this limitation (Cheung et al. 2015b).

Author: Elizabeth Robson
Editors: Erin Stephenson, Kari Rayner
Colorimetry is a branch of color science used to numerically describe the color of a target area. The standards are defined by the CIE (the Commission Internationale de l’Eclairage, or the International Commission on Illumination), whose diagrams are based on normalized illuminants and an average observer (Johnston-Feller 2001). The most commonly used standard currently is the CIE 1976 L*a*b* colorimetric space (Figure 1). The “language” of colorimetry is used to unambiguously define the perceptual dimensions of color using three independent variables: hue/tint, saturation, and lightness (Johnston-Feller 2001). Practically, these variables are measured using a non-destructive analytical technique with a small, handheld device to obtain spectral reflectance curves (Figure 2). A standard sample, such as a tablet of barium sulphate or a disk of opal glass, should be used to calibrate the device (Lorusso et al. 2008). Templates can be created using mylar or paper and circular punches to ensure that the exact same surface area is measured each time. Once two or more measurements have been made of a surface area, the change in L* (lightness), a* (red-green shift), and b* (yellow-blue shift) values can be compared, and the ΔE (total color difference) can be calculated using various formulas (Johnston-Feller 2001, Lorusso et al. 2008). These colorimetric measurements can be used to monitor changes in color during treatment or display; quantify discoloration of media, including restorations, over time; and occasionally to characterize and identify pigments (Marchiafava et al. 2014, Johnston-Feller 2001). 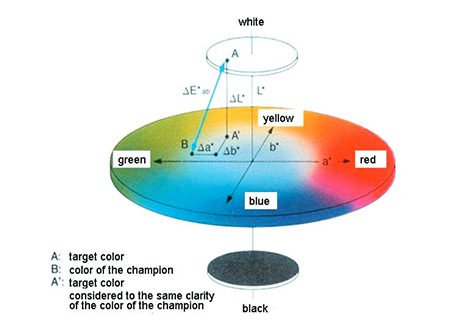 Figure 1: Representation of the ΔE in the chromaticity diagram L*a*b* (Lorusso et al. 2008). In this diagram, the target color (A) refers to what would be considered the original measurement, while the “champion” (B) refers to a second measurement taken later in time. 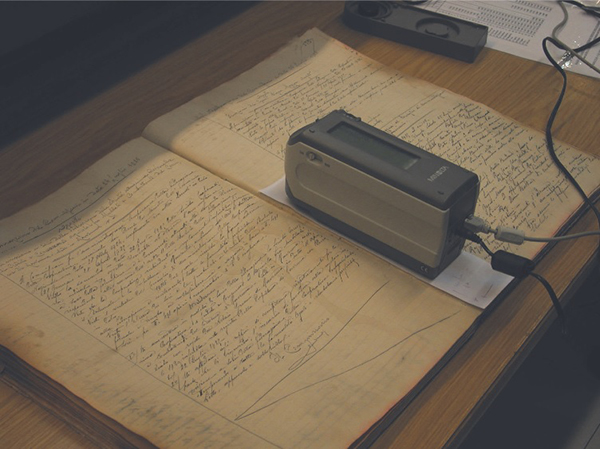 McGlinchy, C. 2012. Handheld XRF for the examination of paintings: proper use and limitations. In Studies in archaeological sciences: handheld XRF for art and archaeology, edited by A. N. Shugar and J. L. Mass, 131-158. Leuven, Belgium: Leuven University Press.

Nankivil, D., A. DeCruz, and J. A. Izat. 2015. Observations on the use of OCT to examine the varnish layer of paintings. Paper presented at the AIC 43rd Annual Meething, Miami.